Rihanna's Dance Moves at the Grammys Are the Latest Internet Sensation

Rihanna‘s performance of her song “Wild Thoughts” during the 2018 Grammys on Sunday caused a tweetstorm of memes by the singer’s fans.

The star’s energy during the performance alongside DJ Khaled and Bryson Tiller lit up the room as she showed off her dance moves with a red flower pinned to her long locks.

But what really caught viewers’ attention were Rihanna’s facial expressions combined with her grooving.

“When she hungry and finally get some food,” someone tweeted with a clip of Rihanna performing.

Others quickly followed, including others who alluded to food or having dance skills.

In addition to performing, Rihanna was nominated for — and won — a Grammy Award for best rap/sung performance for her collaboration with Kendrick Lamar on “Loyalty” off his album Damn.

While accepting the award, Lamar quickly turned things over to the 29-year-old saying she “gassed me on my own song” and that the award “really belongs to her.”

“Well thank you Kendrick for giving me this incredible opportunity to be on such a good record,” she said. “I’m honored to be able to do this with you.”

Although Rihanna opted out of walking the red carpet, hours before the event she shared a stylish snap of herself wearing a white mini dress with a bustier top with an oversized white coat that trailed behind her on the floor, which she accessorized with a pair of boxy sunglasses.

“Stay pressed,” she captioned the photo, seemingly referencing “Lemon” her song with N.E.R.D. 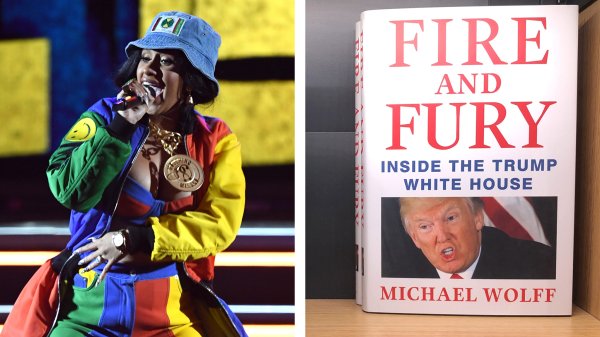 Hillary Clinton and Cardi B Read the Fire and Fury Audiobook
Next Up: Editor's Pick