U.S. soldiers may have inadvertently mapped remote military bases including in sensitive locations such as Iraq, Afghanistan and Syria, through publicly sharing their jogging routes with a GPS tracking app.

Social fitness tracker Strava created an online, interactive heatmap based on satellite data from the routes logged by its subscribers. But in some countries, the heatmap appears to illuminate paths taken around military structures used by American and allied military personnel, Agence France-Presse reports.

In Iraq, for instance, the sparse data accumulated by Strava appears to be concentrated around well-known military bases. Likewise in Syria and Afghanistan, the exercise paths sent to the app appear to correlate with military strongholds, according to AFP.

Strava said that its heatmap was based only on information that its users publicly shared. Privacy settings within the app are supposed to allow users to opt out of the tracking system.

Nathan Ruser, an Australian student and analyst for the Institute for United Conflict Analysts, was one of the first to highlight the fact that the “U.S. bases are clearly identifiable and mappable,” from the Strava data.

Beyond pinpointing military base locations, which are typically well-known, the problem with Strava’s heatmap is that it possibly reveals more personalized details about military personnel’s movements — information that could compromise operational security. If left on during military drills or patrols, the app could also highlight sensitive outposts and a troop’s habitual routes.

“If soldiers use the app like normal people do, by turning it on tracking when they go to do exercise, it could be especially dangerous. This particular track looks like it logs a regular jogging route. I shouldn’t be able to establish any Pattern of life info from this far away,” Ruser tweeted.

Air Force Colonel John Thomas, a spokesman for U.S. Central Command, told the Washington Post that the military was looking into the implications of the Strava map. 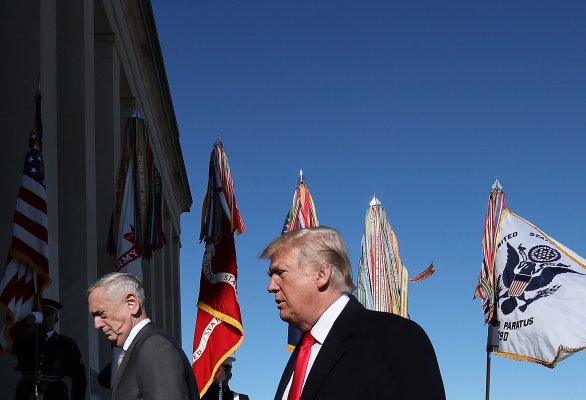 President Trump's New Defense Strategy Is a Return to the Cold War
Next Up: Editor's Pick