By Jamie Ducharme and Jennifer Calfas

A rescue team saved a French climber after she and her climbing partner were stranded on Nanga Parbat, a deadly slope in Pakistan nicknamed “Killer Mountain.”

Elisabeth Revol, the French climber, was saved after a climbing team attempting to ascend the nearby K2 halted their summit and, by way of a Pakistani military helicopter, moved to Nanga Parbat to rescue the climbers, according to the BBC.

However, Revol’s climbing partner, Tomek Mackiewicz of Poland, was not saved. The climber was not with Revol, and a friend of Revol’s said in a Facebook post that rescue was “not possible – because of the weather and altitude it would put the life of rescuers in extreme danger.”

“All our thoughts go out to Tomek’s family and friends,” the post, from Ludovic Giambiasi, said, according to the BBC. “We are crying.”

Revol and Mackiewicz got stuck more than 24,000 feet up the roughly 26,500-foot mountain and used a satellite phone to call for help, according to the BBC. Mountaineers were able to track part of the climbers’ descent down the Nanga Parbat peak through a combination of Revol’s messages and tracker.

Polish climbers who were attempting the first winter summit of nearby peak K2 paused their mission to join the rescue effort, Pakistani officials told the Express Tribune. Four climbers on Saturday were transported by helicopter to Nanga Parbat to help bring the stranded mountaineers down to safety.

A GoFundMe page, which was created to fund the Killer Mountain rescue mission, says the money will go toward helping Mackiewicz’s children. So far, it has raised €102,435, about $127,295.

Killer Mountain has earned its morbid nickname. More than 30 climbers died on Nanga Parbat before it was eventually summited in 1953, according to the BBC. 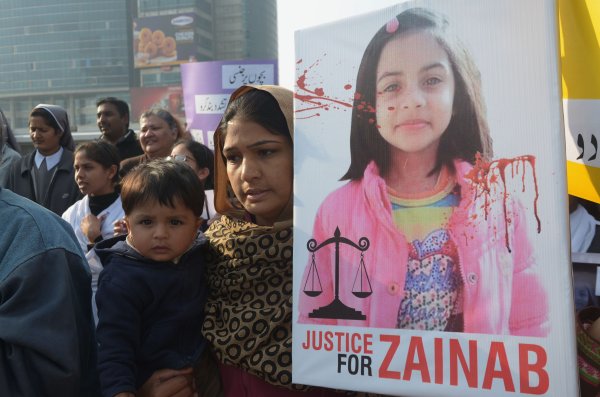 Suspect Arrested in 7-Year-Old's Rape and Murder
Next Up: Editor's Pick