Will President Trump Fire Robert Mueller? Here's What We Know

Rumors are intensifying that President Donald Trump might fire special counsel Robert Mueller after a weekend tweetstorm in which Trump called out Mueller by name and argued that his investigation is biased.

White House lawyer Ty Cobb said Trump isn’t considering firing Mueller. “In response to media speculation and related questions being posed to the Administration, the White House yet again confirms that the President is not considering or discussing the firing of the Special Counsel, Robert Mueller,” he said in a statement Sunday night.

But Trump did order a White House lawyer to fire special counsel Mueller last June, according to multiple reports, and the New York Times, Washington Post and NBC News reported that White House counsel Don McGahn threatened to resign rather than carry out the order, leading Trump to back down.

Asked about the reports while at a summit in Davos, Switzerland, Trump called it “fake news.”

The reports say that Trump felt Mueller faced conflicts of interest in investigating Trump because he resigned his membership at a Trump golf club in Virginia over fees; worked for a law firm that had previously represented his son-in-law, Jared Kushner; and had been interviewed to return as FBI director in May.

Read more: President Trump Is Actually Allowed to Have Robert Mueller Fired, According to the Constitution

What do we know about the potential firing of Mueller by Trump? Here’s a quick look.

In an interview with George Stephanopoulos on ABC’s This Week, newly hired Trump attorney Jay Sekulow argued that Trump has the constitutional authority to fire Mueller if he wants, citing a controversial and expansive theory of presidential power known as the “unitary executive.”

The following day, the New York Times reported Trump was “entertaining the idea of firing” Mueller but that White House staff successfully discouraged him, and White House spokeswoman Sarah Huckabee Sanders told a press gaggle aboard Air Force One that it was within his power:

Reports from the Wall Street Journal and the Washington Post on June 14 both indicated that Mueller’s investigation had now expanded to look at whether Trump attempted to obstruct justice when he fired Comey.

In mid-June, Trump then took to Twitter to criticize the special counsel investigation, particularly over its potential focus on obstruction of justice, calling it the “single greatest WITCH HUNT in American political history” (a phrase he has repeatedly used to describe the investigation) and arguing that investigators had conflicts of interest.

The next day, he tweeted again, appearing to criticize Deputy Attorney General Rod Rosenstein, who appointed Mueller as special counsel after Attorney General Jeff Sessions recused himself from any investigations into Russian meddling in the 2016 election.

July 19: Trump says Mueller should not investigate his finances

During an interview with the Times in July, Trump then said Mueller would cross a line if he began looking into his family’s finances:

But in the interview, Trump also declined to say whether he would fire him if that happened:

In an appearance on ABC’s This Week, White House adviser Kellyanne Conway said Trump “has not even discussed” firing Mueller:

At a joint news conference with Senate Majority Leader Mitch McConnell in October, Trump said that he would like to see the special counsel’s investigation end because “the American public is sick of it.”

But he again said he was not considering firing Mueller:

On Oct. 30, former Trump campaign foreign policy advisor George Papadopoulos pleaded guilty to lying to the FBI as part of Mueller’s investigation. At a news briefing in the White House that day, Sanders was again asked if Trump plans to fire Mueller and again said he does not:

Dec. 17: Trump says he is not considering firing Mueller

Returning from a weekend at Camp David, Trump tells reporters that he is not considering firing Mueller, a question prompted by complaints from his allies about how Mueller’s team obtained emails from the presidential transition.

Jan. 23: White House says firing Mueller would not be ‘helpful’

After a White House spokesperson again referred to the special counsel’s investigation as a “witch hunt,” Sanders was again asked if Trump would fire Mueller, and she said it would not be “helpful to the process.”

McCabe said his ouster was “part of this administration’s ongoing war on the FBI and the efforts of the special counsel investigation, which continue to this day.” McCabe could be an important witness in Mueller’s probe, given his proximity to Trump’s firing of James Comey as FBI director, which Mueller is reportedly interested in. Trump’s personal lawyer John Dowd said in a statement the day after McCabe’s firing that Rosenstein should “bring an end” to the Russia investigation “manufactured” by Comey, but told the Associated Press that he wasn’t telling Rosenstein to immediately fire Comey.

Renewing speculation that he might fire the special counsel, Trump tweeted about Mueller by name, saying the investigation “should never have been started” and accusing the team of political bias.

After Trump’s tweets, White House lawyer Ty Cobb put out a statement the same day that said, “In response to media speculation and related questions being posed to the Administration, the White House yet again confirms that the President is not considering or discussing the firing of the Special Counsel, Robert Mueller.”

Speaking on CNN, South Carolina Republican Senator Lindsey Graham said firing the special counsel would be the “beginning of the end” for Trump. “If he tried to do that, that would be the beginning of the end of his presidency,” Graham said. “The only reason that Mr. Mueller could be dismissed is for cause. I see no cause when it comes to Mr. Mueller.” He also added: “I pledge to the American people, as a Republican, to make sure that Mr. Mueller can continue to do his job without any interference.” 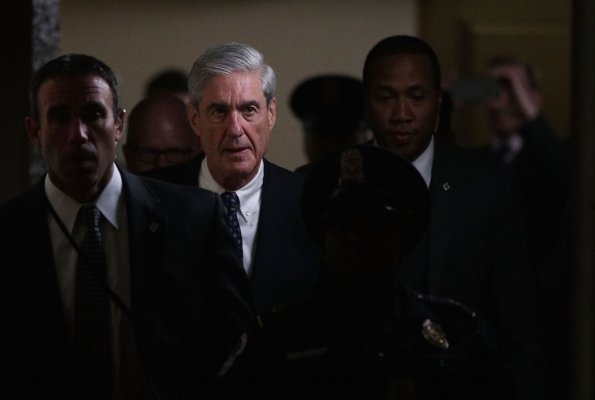 President Trump Is Actually Allowed to Have Robert Mueller Fired, According to the Constitution
Next Up: Editor's Pick