Movies in which very fragile people head out by themselves on impossible quests can be more unnerving than enjoyable, and Ben Lewin’s Please Stand By gets off to a shaky start. Dakota Fanning stars as Wendy, a young woman with autism who’s obsessed with Star Trek. She hopes to win a screenplay contest keyed to the show, only to realize that her entry won’t make the deadline unless she delivers it in person. Secretly, with her spirited Chihuahua Pete in tow, she leaves the San Francisco group home that offers her the predictability and security she needs and boards a bus to Los Angeles. When her psychologist (Toni Collette) and her sister (Alice Eve) realize she’s missing, they launch a frantic search to track her down.

Wendy’s negotiations with an unfamiliar and often threatening world should be excruciating to watch. But Please Stand By is only semi-excruciating: Lewin (The Sessions) maintains control of the movie’s tone, so even when we’re sure the absolute worst is going to happen to Wendy–or to Pete–we’re proved wrong. Wendy, under normal circumstances, is incapable of crossing a busy street alone. But watching her interact with the world and conquer her anxieties even in the tiniest ways results in a kind of pleasurable relief.

That’s largely thanks to Fanning, a performer who never chomps down on a role–she plays Wendy as a person and not a condition. In one of the movie’s finest moments, Patton Oswalt shows up as a cop fluent in Klingon. He’s speaking Wendy’s language, in more ways than one, and when she responds in kind, we fear less for her. At that point we know she has what it takes to live long and prosper. 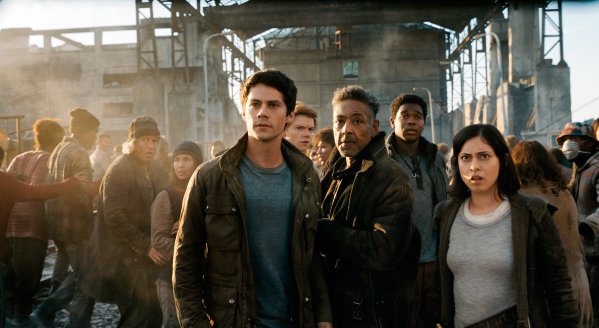 Maze Runner: The Death Cure Runs Out of Steam Quickly
Next Up: Editor's Pick