How Rap Became the Sound of the Mainstream

Quavo, Offset and Takeoff, of Atlanta trio Migos, are at the forefront of rap’s latest wave
Rony Alwin
By Raisa Bruner

When Philadelphia rapper Lil Uzi Vert was 20 years old, he uploaded a few songs to SoundCloud, a free music-sharing platform. The tracks got a couple hundred plays, then a few thousand. Three years later, on the strength of a moody song called “XO Tour Llif3” and a series of streaming-only mixtapes, the rapper, now 23, has racked up over a billion Spotify streams and nabbed a Best New Artist Grammy nomination.

Lil Uzi Vert’s rise is impressive. But this year, he’s just one in a crowd of hip-hop stars who are dominating the mainstream. Nearly half of the songs on Jan. 27’s Billboard Hot 100 chart were rap or incorporate elements of hip-hop. Listening in the genre increased 74% on Spotify in 2017, and Drake, the Weeknd and Kendrick Lamar were three of the platform’s top five most popular artists. This is a marked change from the past 10 years, when artists like Taylor Swift, Katy Perry and Lady Gaga ruled the charts. In fact, “Look What You Made Me Do,” the lead single from Swift’s latest album, Reputation, fell from the No. 1 spot on the singles chart after just three weeks, dethroned by the rapper Cardi B’s viral hit “Bodak Yellow.” That was quickly succeeded by the downbeat rap of Post Malone and 21 Savage, whose single “Rockstar” topped the Hot 100 for eight straight weeks.

The Grammys are evolving as well. In years past, Album of the Year nominations might nod to one hip-hop work, tokenizing the genre. This year, rap dominated the category, thanks to artists like Jay-Z, Lamar and Donald Glover, who has pushed genres with his musical project Childish Gambino. Three of the five nominees for Record of the Year are also hip-hop, as are three of the five up for Best New Artist, including Lil Uzi Vert.

For fans of American hip-hop, this recognition is long overdue. “It was kind of a ‘Well, duh,’ moment,” says Ross Scarano, Billboard vice president of content. “Rap has been the most dominant force in American culture for years.”

From the seminal 1979 hit “Rapper’s Delight” to the heyday of mid-’90s gangster rap and the pop-rap crossovers of the early 2000s, there has long been an appetite for rap. But it hasn’t always made its way to the masses. The tastes of a few–radio titans and record-label kingpins of the predominantly older, white and male variety–often ruled distribution, and in turn popular success.

So what changed? It’s now easier than ever for rappers to make music–create a beat on a computer and drop in a voice note and you have the beginnings of a song. Add the power of streaming platforms like SoundCloud, Spotify and Apple Music, which makes it easier for fans to discover emerging voices, and it’s no surprise that hip-hop has been given a new and lasting way to shine. This is not the first time rap has ascended to the mainstream; pop-rappers including Nelly, Ja Rule and Ludacris all enjoyed stretches atop the charts in the 2000s. But the breadth of its impact across metrics both quantitative and cultural now marks a new era, especially after the latest phase of pop-star dominance. “We didn’t change anything,” notes Kevin “Coach K” Lee, one of the founders of revered Atlanta label Quality Control, about why rap is hitting its stride now. “We just kept it real. It just started connecting. Now it’s going to start expanding.”

On the new digital platforms, rap is freed from old-school constraints. “There are no gatekeepers,” says Nick Holmsten, Spotify’s vice president of content, global head of shows and editorial. “When I grew up, you had to be in a band, know how to play a guitar.” Now you just need a touch of technological savvy to make the music–and access to a smartphone to find it. The gatekeepers have been forced to shift their strategies in accordance with what listeners are actually consuming, regardless of its origins. “There’s not a single person today under the age of 25 that looks at music from a genre perspective,” notes Holmsten. “[People are] much bolder in their listening.”

Plus, streaming services give rappers the chance to be discovered by huge audiences. SoundCloud, for instance, claims to reach 175 million global monthly users. Spotify has over 70 million subscribers and continues to grow rapidly; one popular hip-hop playlist curated by the platform, RapCaviar, has nearly 9 million regular listeners. Once the Billboard charts began taking all streaming data into consideration in 2013, hip-hop gained ground. In turn, Top 40 radio took notice. And eventually, even the notoriously out-of-step Grammys had to change to keep up. Last year, Chance the Rapper won an award for a streaming-only album, the first of its kind to do so–a watershed moment, proving the viability of streaming even in the most traditional of environments.

Consider Migos, a trio of Atlanta-born relatives. Quavo, Offset and Takeoff are three of the most popular rappers today, with a No. 1 album, two Grammy nominations for their top-charting hit “Bad and Boujee” and a second album coming out on Jan. 26, aptly titled Culture II. (“It represents the power of rap, it represents the power of our generation,” 26-year-old Quavo says of the title. “Calling it Culture means we represent hip-hop.”) In the past, they might have found only niche popularity in the Atlanta trap scene. Instead, Lee and Thomas discovered their work thanks to fans who were taking note online, and have guided the personality-driven trio toward blockbuster national success. (Not without controversy: Offset recently came under fire for using homophobic language in his lyrics.)

Katy Perry, still one of pop’s biggest names, tapped the three to appear in her latest album’s second single. The result, the raunchy “Bon Appétit,” bombed. Just a few months before, though, Migos had notched their own No. 1 without any need to play nice with a pop star.

“It’s all about timing,” says Quavo. “Rap has been taking over slowly but surely. We’re influencing a whole new wave, a whole new style, a whole new flow of music.” For Offset, the key to their rise has been consistency: “We don’t just go through the motions.” Instead, they’ve released song after song, often as featured artists on other tracks. Fans are hungry for a constant stream of new content, and no one is better suited to satisfy this demand than a trio of prolific artists who work across genres. Then there’s their image: if rappers are the new rock stars, few embody that lifestyle better than the high-fashion, flashy Migos. Offset proposed to his girlfriend Cardi B with a giant eight-carat diamond ring, an event she splashed all over social media to great effect.

Their story speaks to rap’s particular appeal for aspiring stars: how nimbly it can be created, especially for those who might not otherwise have the opportunity. Both Holmsten and Scarano refer to it, fittingly, as “democratic.”

It’s impossible to talk about rap as a genre without also talking about issues of race and class, and in a national moment of deep division, it’s apt that people–especially young people of color–are turning to music to find an outlet. The barriers to entry, either as a fan or an artist, are lower than they’ve ever been; the visibility of those who have made it is, thanks to social media, higher than ever before. For kids, to become the next Migos, rising from the streets to hip-hop royalty, is a new American Dream.

Music trends have always been youth-powered, and today that youth taste skews to the specific and the authentic. That includes pop artists like Lorde and Julia Michaels, who write reflectively about insecurity and desire, as well as the forward-thinking hip-hop boy band Brockhampton, the earnest rapper Lil Yachty and Young M.A., a rare openly queer voice in rap. In an era of increasingly complex identity politics, the perspectives that rappers share hit home. “There’s a craving for more complicated art,” Scarano says. But for many listeners, it’s also more relatable art.

And just as there’s tremendous variety in other genres, so it is in rap. Yes, Migos sing about parties and sports cars, but they also reflect on their impressive rise into superstars from nothing. Kendrick Lamar wants us to consider our faith; Jay-Z examines the complexities of marriage; the buoyant Chance the Rapper doesn’t shy away from political statements. Artists like Desiigner and Jaden Smith are high-spirited, while their emo-rap counterparts Lil Uzi Vert and Lil Xan reflect on substance abuse and heartbreak. Perennial hitmaker Drake flirts with global rhythms. Cardi B, the first female rapper to top the charts since Lauryn Hill in 1998, is an unlikely Cinderella story, urging women to know their worth. As rap has become the sound of the mainstream, the sonic landscape of the genre has become as varied as the U.S. is diverse.

Moreover, hip-hop’s recent ascendency means greater visibility for people of color at a moment when many feel under attack, whether as a result of police brutality or changing immigration policies. And even though several of rap’s rising stars are white, including G-Eazy and Post Malone, its most influential voices maintain deep roots in historically marginalized communities. As Scarano puts it, “Rap has always been a place for young black and brown people to speak about the world as they see it and as they live it.”

The fact that it’s now the new normal is a triumph for voices who haven’t always had platforms to call their own–and finally do. Migos are smart to call their albums “culture.” That’s exactly what it sounds like. 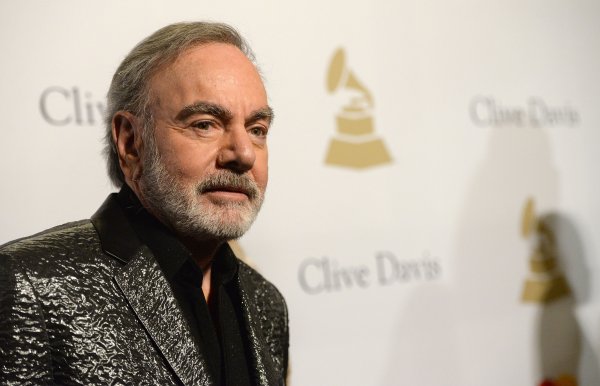 Neil Diamond Says He Has Parkinson's Disease
Next Up: Editor's Pick