The White House did not deny a report that President Trump asked Deputy FBI Director Andrew McCabe who he had voted for in the 2016 election.

“The President and Andrew McCabe have had limited and very non substantive conversations,” White House Press Secretary Sarah Huckabee Sanders told reporters at the daily briefing Wednesday. “I can’t get into the details of what was discussed. I wasn’t there.”

“I wasn’t in the room,” she continued when pressed again. “I don’t know what was discussed. I know he didn’t ask me.”

The Washington Post, citing seven current and former officials, reported Tuesday that after President Trump had fired former FBI Director James Comey in May, he requested an Oval Office with McCabe, who had assumed the position of acting director. In that meeting, Trump asked McCabe who he voted for in the 2016 election, according to the Post.

McCabe reportedly responded that he did not vote, but Trump then told him he was angry that McCabe’s wife Jill had received hundreds of thousands of dollars in donations during her state senate bid from a political action committee that was run by Terry McAuliffe, the former Virginia Governor and close associate of Bill and Hillary Clinton.

Trump has repeatedly singled out McCabe on Twitter for overseeing the investigation into Clinton’s private email server, and has expressed glee about reports of his imminent retirement—which Sanders mentioned again on Wednesday.

“There are widespread reports of his retirement,” she said when asked about the conversation between Trump and McCabe. “We’re making sure that we’re focused on the FBI and DOJ serving all Americans fairly and efficiently and we’re going to move forward from there.” 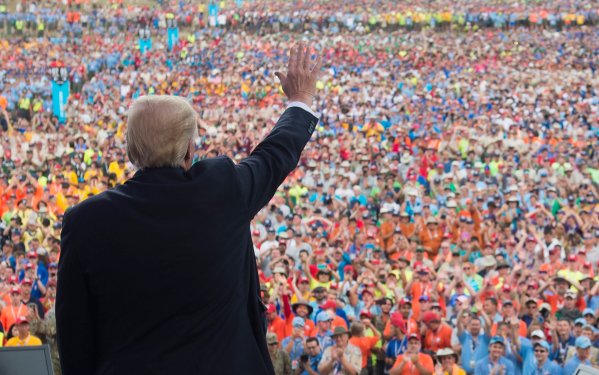 Here Are the Promises President Trump Kept and Broke in His First Year
Next Up: Editor's Pick