It’s no secret that Olympic icon Michael Phelps has already started teaching his one-year-old son Boomer with wife Nicole to swim; he’s previously appeared in the pool with Boomer from an early age.

But in a new Instagram, the U.S.’s most-winningest athlete shared some behind-the-scenes footage of the at-home training program they’re already implementing for young Boomer. Accompanied by the family dog — who really wants to get in on the action — Phelps shows his signature pre-race move, an arm extension and cross-body slap that limbers him up and clears his mind for the water.

Boomer plays along, attempting the move with aplomb, although his wingspan and muscle control do not quite match that of his legendary father — yet. But hey, if they’re already well on their way to the finer points of Phelps’s racing technique, looks like there’s plenty to look forward to for young Boomer’s future in the pool. Olympic team of 2032, here he comes. 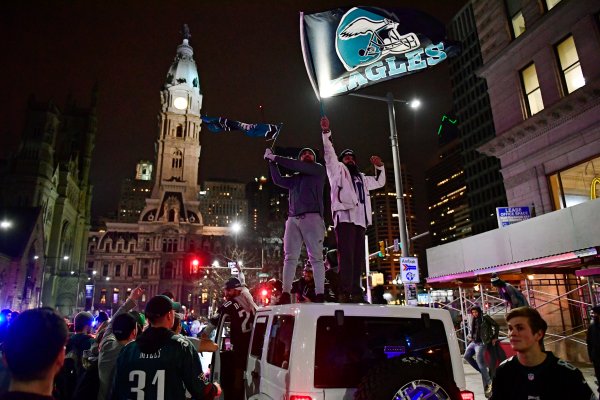 Eagles and Patriots Fans Had a Really Wild Time Celebrating Going to the Super Bowl
Next Up: Editor's Pick