Your iPhone Is About to Get a Bunch of New Features

Apple revealed Wednesday a plethora of new features and upgrades coming to the iPhone and iPad with the iOS 11.3 upgrade due out in the spring.

Most notably, Apple is adding setting allowing iPhone owners to disable a performance downgrade meant to prevent unexpected shutdowns in older iPhone models with aging batteries. The features comes after Apple was criticized for meddling with iPhone performance without customer consent; a pair of California residents even filed a class action lawsuit against the company over the issue. Apple has since apologized, lowering the price of iPhone battery replacements from $79 to $29. The ability to turn off this performance-altering feature will be found in the Battery section in the iPhone’s Settings menu.

Apple’s iOS 11.3 upgrade will also have a feature called Health Records, a one-stop-shop for iPhone owners to view their collective health data from participating medical providers. As its name implies, the app keeps track of a user’s health records so that they can see information like allergies, recent or upcoming procedures, medications, and lab results all in one place. Apple says this information is protected by encryption and requires a passcode to view.

Apple is making some improvements to its ARKit augmented reality platform as well, which it launched in the fall with iOS 11. The augmented reality software will now be able to recognize vertical surfaces like walls and doors, whereas it previously could only identify horizontal objects such as tables and floors. It will also be able to learn the position of two-dimensional objects hanging on a wall, like posters and signs, which Apple says developers could use to add interactive augmented reality elements to movie posters or museum exhibits.

iOS 11.3 will also bring changes to Messages, which will allow users to chat with businesses to schedule appointments, make purchases with Apple Pay, or ask other questions. This feature will be launching in beta in iOS 11.3 with support for companies like Hilton, Discover, Lowe’s, and Wells Fargo. Facebook has made a similar push with its Messenger app, particularly by adding a new feature that makes it easier for Messenger users to discover businesses that are active on Facebook’s messaging platform.

Other new features in iOS 11.3 include four new Animoji characters — a dragon, a bear, a skull, and a lion — and updates to Apple Music and Apple News. 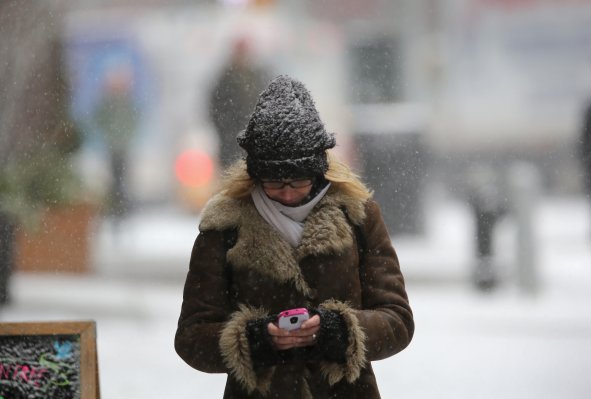 Cold Weather Can Mess With Your Phone. Here's How to Protect It
Next Up: Editor's Pick