Students at Marshall County High School in Benton, Kentucky, showed up to class Tuesday for a day of learning. By 8 a.m., they were met with unimaginable horror when a fellow classmate pulled out a gun and opened fire.

Bailey Nicole Holt and Preston Ryan Cope, both 15, were killed. Police say 17 others were injured. Five were in critical condition Tuesday night.

Now, some of the students who were at Marshall County High Tuesday are recounting the terrifying scenes they witnessed inside their school and the heroism of teachers and classmates in the midst of the mass shooting.

Student Bryson Conkwright said when he saw the gunman pull a weapon out, he didn’t immediately process what was happening.

“About the time that he pulled the trigger, it hit that this kid’s shooting at us. He’s shooting at us. And I’m just still there in shock, and I’m watching my friends and people that I’ve known forever, some people, just drop. It was unbelievable. It was chaos. Everybody was screaming,” Bryson told Good Morning America on Wednesday.

Marshall County High School junior Tristan Cline told CBS he passed a friend who had been shot and collapsed in the parking lot while running away. Cline said he loaded his friend into his car and drove him to the hospital.

“I mean, it had to have been 400 kids, and I started to flee in my car and that’s when I saw my friend Danny. He was laying in the field. He had been shot and he was surrounded by some teachers, and they didn’t know what to do, so I put him in my car as fast as I could,”

Brian Butler, 17, told The Today Show that he and other students barricaded themselves in a classroom.

“We realized what it was. We started to take off. Kids were scrambling over other kids, and it was horrible,” Brian said.

“The ones that lost their lives, there were probably the nicest people I ever met. They never had anything negative to say. They always had a smile on their face,” Bryson said.

The shooter has not been identified, though he has been taken into custody. Authorities said he will face murder and attempted murder charges. The 15-year-old student could be tried as an adult, according to CBS. Police have not yet released any information on a possible motive. In a press conference Tuesday, officials said they would be looking into “details” of the suspect.

It was the second school shooting in the United States within two days, and the second the area has seen. A 1997 shooting 30 miles away left three dead. 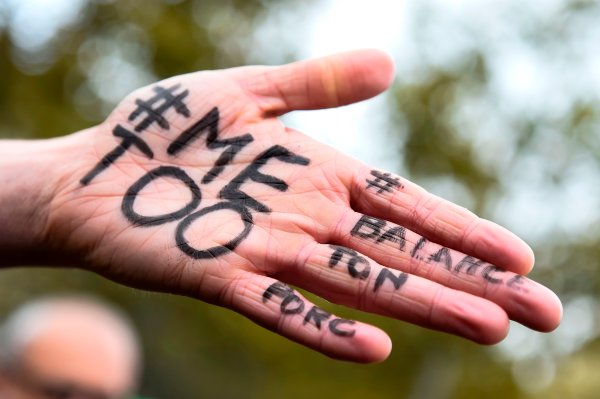 Accused Sex Trafficker Wants Trial Delayed Because of #MeToo
Next Up: Editor's Pick