Seth Meyers is delving deep into the psyche of President Donald Trump with a special Late Night with Seth Meyers investigation. The late night host jokingly divulged that his team has tapped into the ability of recording the “tiny voice that is inside Donald Trump’s head.”

“You might be surprised to know that, like everyone’s inner voice, Donald Trump’s is filled with paralyzing fear and self-doubt,” Meyers said.

Meyers used this insight to imagine what that tiny voice was thinking during a video clip that showed Trump standing next to vice president Mike Pence, while seemingly giving him some side-eye, something that Meyers imagined was masking some very insecure internal dialogue.

“Hey Donald, it’s me, the tiny voice in the back of your head,” Meyers as Trump’s inner voice said. “Are you thinking what I am thinking because I am thinking that Mike Pence looks a lot more like a president than you do. I mean, look at him. He’s killing it right now, speaking in complete sentences, turning the page each time he finishes a page, not making insane gestures. He looks like a real president.”

That wasn’t the only dig that Meyers had for Trump via this inner voice, however; he gave a backhanded compliment to Pence while continuing to highlight Trump’s seeming insecurity.

“And look at you, you look like a guy who won a contest to stand next to a president. I mean, he’s a complete freak and all but at least he can fake being normal. How does it feel to be weirder than Mike Pence?” 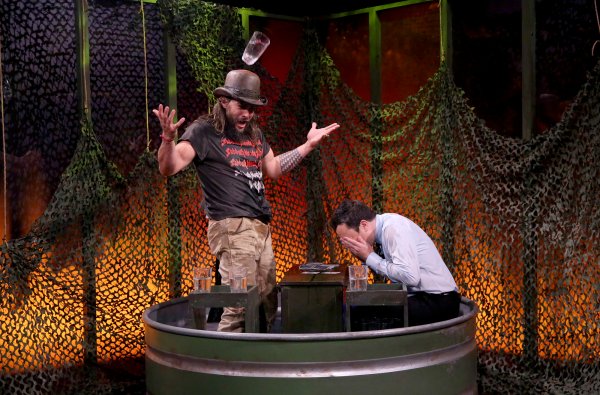 Jason Momoa Really Lives Up to His Khal Drogo Reputation in 'Water War' Jimmy Fallon
Next Up: Editor's Pick