The 5 Best Smartphones You Can Buy Right Now

Between all the makes, models and sizes out there, buying a new smartphone can be a dizzying experience. Should you get an iPhone or an Android? Do you want a massive phablet with a giant screen, or a more modest and pocketable phone? Do you care about having the latest and greatest camera features, or are you O.K. with something more modest?

If you need a little help picking your next smartphone, we’re here for you. These are our five favorite smartphones you can buy right now.

Apple fans who want a bigger screen without carrying around a larger phone should check out the iPhone X, pronounced “iPhone 10.” Because Apple has reduced the size of the border that frames the screen, the iPhone X’s display covers nearly the entire front of the device, meaning Apple was able to enlarge the screen while keeping the overall device smaller than the iPhone 8 Plus. It’s also the first iPhone to use an OLED panel rather than LCD for the display, giving the Phone X better contrast than Apple’s other mobile devices.

But the headlining feature on Apple’s top-of-the-line iPhone is Face ID, a facial recognition system. Owners can use Face ID to unlock their iPhone X and authenticate Apple Pay purchases, as well as use special features in certain apps. The 12-megapixel dual camera on the iPhone X is also tough to beat, especially when it comes to capturing outdoor photos and selfies. Above all else, the iPhone X stands out for its elegant design, sharp and vibrant screen, and quality camera.

The iPhone X may be Apple’s flashiest iPhone, but don’t underestimate the iPhone 8 and iPhone 8 Plus. Both share some of the improvements found on the iPhone X, such as a new glass back that supports wireless charging and Apple’s new A11 Bionic processor (meaning you performance won’t suffer if you choose the cheaper model.) Unlike the iPhone X, neither of these phones include facial recognition, and they both still have the Touch ID home button. But that could be a benefit, because you won’t have to learn a new method of using your iPhone.

The iPhone 8 and 8 Plus are solid choices for Apple fans who are upgrading from a an older phone, like an iPhone 6s or 6, and just want something that feels newer and faster. Those who need extra screen space and want the dual camera setup for taking photos in Portrait Mode and with better zooming capabilities should opt for the Plus model.

Read more: The 5 Best Laptops We Saw At CES

It may have taken a few years, but Samsung finally perfected the curved-screened smartphone with its Galaxy S8 and Galaxy S8+. Like several popular phones that were launched in 2017, the Galaxy S8 and S8+’s screens are virtually borderless. But Samsung’s devices include a less common characteristic: the screen subtly folds over the left and right edges of the phone, making the frame around the screen appear more seamless than on rival devices.

One of the Samsung Galaxy S8’s best changes, however, is how much simpler the software is compared to previous Galaxy models. The Galaxy S8 has a tighter, simpler look than the busy software on previous Samsung devices. And unlike the Apple iPhone, Samsung’s new phones have both iris and fingerprint scanners for unlocking the device.

The Galaxy S8 camera is roughly on par with that of the Galaxy S7; you can expect generally rich colors and good overall performance. The battery life is also long enough to comfortably last throughout an entire day, but that will vary depending on how you use your phone.

All that said, Samsung’s Galaxy S9 is right around the corner, so it may be worth holding off a little while. That way, you can decide whether to spring for the latest and greatest model, or opt for the S8 at what will probably be a discount compared to today’s prices.

Google’s most recent flagship smartphones represent a major step up from the first-generation Pixel. With an excellent, much-improved camera, a clean interface that’s simpler those found on most smartphones, and some useful software enhancements, Google’s newest Pixels are certainly worth a look.

The larger Pixel 2 XL model includes a 6-inch screen with a higher resolution of 2880 x 1440 compared to the standard Pixel 2’s 5-inch 1920 x 1080 screen. The Pixel 2 XL’s screen isn’t just bigger, it also occupies nearly the entire front of the phone with barely any visible border, like the Galaxy S8 and iPhone X.

But both phones have the same camera setup — a 12.2-megapixel sensor and a f/1.8 aperture lens — which I found in some cases was able to shoot better photos than the iPhone X and Samsung Galaxy S8. But perhaps my favorite aspect of the Pixel 2’s camera was its Google Lens feature, which turns the camera into a real-time object identification tool. Pointing the phone’s camera at an object or landmark and tapping the Lens icon prompts the phone to pull up more information about the subject.

What most sets the Pixel 2 apart from its rivals are its navigation shortcuts and user interface. The Pixel 2 has a new feature called Active Edge, which makes it possible to summon the Google Assistant just by squeezing the phone’s bottom edges. The phones can also display the song title and artist name of music playing nearby. Overall, the Pixel 2 is a worthwhile choice for Android fans and potential iPhone switchers that care about having a quality camera and easy-to-use software more than facial recognition technology.

For hundreds of dollars less than the Samsung Galaxy S8 and roughly half the price of the iPhone X, the OnePlus 5T’s price alone is enough to catch your attention. But what’s even more impressive is that a phone this cheap, which costs about the same price as the first generation iPhone did in 2007, is actually quite good.

Phones costing less than $600 usually come with some major compromises, but the OnePlus 5T barely has any. Its large AMOLED screen is sharp enough to make photos and videos look great, even if the 1080p screen isn’t downright dazzling like those of its pricer rivals. The OnePlus 5T’s dual camera captures crisp and bold photos, and can even shoot in Portrait Mode like the Plus-model iPhones and iPhone X. During my usage, the OnePlus 5T’s fast-charging battery was able to replenish its power from 48% to nearly 100% in just about a half hour.

The downside, however, is that the OnePlus 5T is not compatible with Verizon or Sprint. In terms of design, the OnePlus 5T also lacks some of the originality older models had, looking more like any other mid-range smartphone you might find. But AT&T and T-Mobile subscribers who want to save some cash should seriously consider this phone. 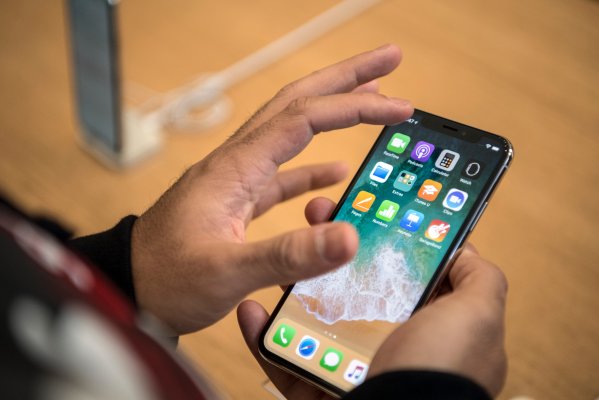 Your iPhone Is About to Get a Bunch of New Features
Next Up: Editor's Pick