The suffering of Myanmar’s Rohingya Muslims is worse than it has been portrayed by the media, Secretary of Defense James Mattis said, countering claims by the government of Aung San Suu Kyi that the international press has been biased in its coverage of what the U.S. and U.N have called a campaign of ethnic cleansing.

“This is a tragedy that’s worse than anything that CNN or BBC has been able to portray about what has happened to these people,” Mattis told reporters during a trip to Indonesia, Reuters reports. “And the United States has been engaged vigorously in the diplomatic realm trying to resolve this, engaged with humanitarian aid, a lot of money going into humanitarian aid.”

Some 688,000 Rohingya have been displaced to Bangladesh since Aug. 25, according to the International Organization for Migration, after fleeing a brutal counter-terror campaign by Myanmar’s military following an insurgent attack on state security forces. Many of the refugees recounted atrocities including extrajudicial killings, gang rape and arson.

U.N. High Commissioner for Human Rights Zeid Ra’ad Al-Hussein has said the violence resembles a “textbook example of ethnic cleansing” and that he couldn’t rule out “elements of genocide.” In November, Secretary of State Rex Tillerson said the violence “constitutes ethnic cleansing,” adding that “no provocation can justify the horrendous atrocities that have ensued.”

The governments of Myanmar and Bangladesh have agreed to begin repatriating hundreds of thousands of Rohingya refugees over the next two years, but rights groups warn that the process is beginning too quickly, and without adequate input from U.N. agencies risks forcing refugees to return against their will or facing further violence.

Bangladesh said the process would be delayed from a start date initially scheduled this week, as officials try to verify lists of people in Bangladesh’s sprawling refugee camps who are eligible for return, according to Reuters. Some of the refugees have issued demands such as citizenship status, accountability and the return of lost property before agreeing to return.

The U.N. refugee agency, UNHCR, which has not been involved in repatriation discussions, has also cautioned that the conditions for return are not in place.

“The necessary safeguards for potential returnees are absent,” UNHCR spokesperson Adrian Edwards said at a press briefing Tuesday. “To ensure the right of refugees to return voluntarily, and in safety and in dignity, we call again on Myanmar to allow the necessary unhindered humanitarian access in Rakhine State and create conditions for a genuine and lasting solution.” 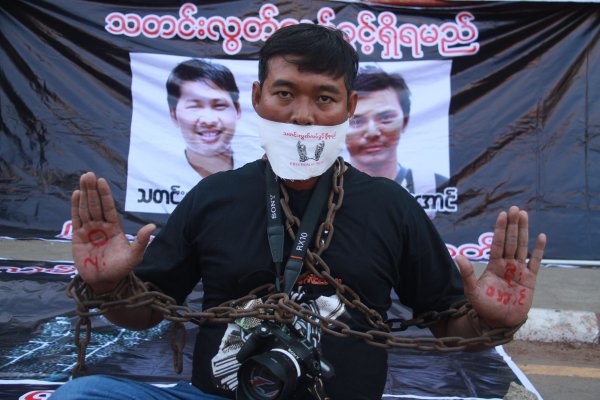 Myanmar’s Case Against Reuters Reporters Is a War on Truth
Next Up: Editor's Pick