Hengki Lee—EyeEm/Getty Images
Ideas
By Donald L. Rosenstein, Justin M. Yopp
Dr. Rosenstein is a psychiatrist and Dr. Yopp is a clinical psychologist at Lineberger Comprehensive Cancer Center at the University of North Carolina; they are the authors of The Group: Seven Widowed Fathers Reimagine Life. Resources for widowed fathers and mothers can be found at widowedparent.org.

In the months following the sudden death of his wife, Neill privately contemplated a terrible question: Would his children have been better off if he had died instead of their mom? His wife, Deanna, had been the family’s nerve center, managing the children’s day-to-day lives while he traveled regularly for business. Now the responsibilities of raising their four children, all of whom were grieving their mother, fell entirely to him. With each parenting misstep and perceived failure, Neill answered his own question with more and more certainty. One evening, during a support group meeting with six other widowed fathers that we formed, Neill declared with unwavering conviction, “There’s no question that the wrong parent died.”

The seven men in that group — Neill, Karl, Joe, Bruce, Steve, Russ and Dan — were all mourning their wives at the same time they had to contend with one disorienting parenting dilemma after another. How should they respond when their children refused to talk about their mother? Did the usual household rules and expectations apply, or should they cut their kids some slack? What was the best way to mark Mom’s birthday, the anniversary of her death or Mother’s Day? There was no playbook for their situation.

Each year in the United States, tens of thousands of parents of young children die. For decades, we as a society have known that a bereaved child’s psychological adjustment is related to the surviving parent’s ability to adapt — yet there are precious few resources for these mothers and fathers. When we formed that first support group, we could not find a similar group in the country.

Before joining the group, the men felt isolated and unsure of their parenting instincts. Each father was living his own version of the same catastrophe and worried that his parental incompetence would only compound his children’s tragedy. By the end of the first meeting, they had begun to bond. They understood each other, cried together and laughed about their seemingly endless “parenting failures” as they tried unsuccessfully to be both Dad and Mom.

During the early group meetings, when one father spoke there were always several heads nodding in agreement. However, when Neill insisted that his kids would have been better off with their Mom than him, it generated the first genuine disagreement among the men.

Karl challenged Neill. “That’s not being fair to yourself. In an ideal world, your children would have both parents. It’s not your fault that they don’t have that.”

Neill stood his ground and an animated group discussion followed. Joe didn’t see any value in even having the conversation: “What difference does it make, we’re the ones who are here.” Dan questioned the presumption that their wives were necessarily better able to comfort, nurture and raise their kids under such terrible circumstances. Bruce argued that they simply had different parenting skillsets than their wives and would have to learn how to braid hair, arrange play dates and figure out their kid’s summer schedules.

In time, the question of whether the wrong parent died morphed into something even more basic: Am I a good enough father? The group’s response to this question was extraordinary. They shared stories about their failures, fears and insecurities. They recounted seemingly impossible conversations with their children about how mom died and why in some cases they didn’t get a chance to say goodbye. Over the course of the nearly four years that the men met, they encouraged each other and healed together. Gradually, the fathers righted themselves.

At a group meeting two years after the debate about parental worthiness, Neill said he felt closer to his children than ever before. Karl then asked if he still felt that the wrong parent died. Neill thought about it for a moment before answering. “I suppose that a part of me will always feel that way. But I don’t think about it the same way now.”

“Well, lots of things. I’m around my kids so much more than I was before Deanna died. And when I’m with them, I’m really with them. My relationship with each of my children is better. I’m not saying that we don’t have our moments but, overall, we are much closer than before.”

“So, does that mean you no longer think that they ended up with the wrong parent?”

“Listen, you guys have heard me talk about how Deanna was such a fantastic mother. The kids were so attached to her and they always went to her first for everything. Now that I’m the go-to parent, that’s how they see me. So, I guess that I don’t see it as a comparison anymore. The reality is that there’s just one parent left. Me. I’m doing the best I can and I’m just glad that my kids and I are tighter.”

Bruce, who lost his wife Lisa, had come to a similar conclusion: “I desperately hate being a widower but I love that I’ve grown closer to my kids as a result.”

Neill kept pushing. He asked Bruce, “Do you ever worry about how people will react when you say stuff like that? I don’t know, almost as if it sounds like you’re glad that Lisa died.”

“I used to worry about that, for sure. Each time I would mention something being better now compared to how it used to be, I felt like I needed to begin by saying, ‘Of course, I would have given anything if Lisa hadn’t died, but… .’”

“I’ve stopped doing that, though,” Bruce added. “People get it. They understand what I’m saying. And if they don’t… well, that’s not my problem. I don’t need to apologize because some good has come from my nightmare. None of us do.”

Seventy-five years ago, the British psychoanalyst Donald Winnicott introduced to the world the wonderfully forgiving notion of the “good enough” mother. Winnicott’s central idea was that perfect parenting was neither possible nor desirable. What our children need is love, connectedness, structure and a parent who is present and in the game with them. Not a perfect parent.

Nothing can ever make up for the loss of a mother or a father. However, over time, and with the kindness and help of each other, the men in our group learned the wisdom and freedom of being a good enough father. And as a result, they did right by their kids. 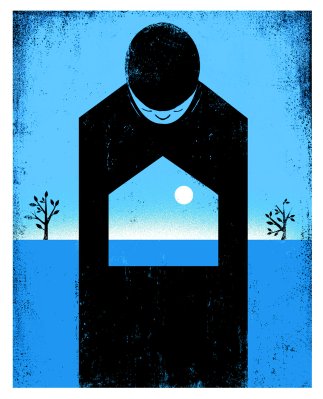 When the Only Home You Know Becomes a Place You May Never See Again
Next Up: Editor's Pick