Donald Trump Won the Shutdown by Shutting Up

One lesson from the latest government shutdown should scare Democrats: Donald Trump won by keeping quiet.

For critics on the left, Trump’s tendency to fire off early-morning tweets on the controversy of the day is a big argument for the case that he does not have the right temperament to be President.

Polls back that up. A Quinnipiac survey from last September showed that 69% of Americans want Trump to stop tweeting. No subset of voters — broken down by party, gender education, age or race — wanted him to continue. Even 52% of Republicans wanted him to stop.

And yet, for Trump’s opponents, the tweets are like #manna. They have consistently undermined his own messaging, hurt him in court and almost derailed two bills his Administration backed.

And what happened when Trump, as Senate Democratic Leader Chuck Schumer said, “sat on the sidelines?” He won. Other than a handful of tweets which took no real position on how to end the shutdown fight, Trump stayed off of television, away from the podium and far from an inauguration anniversary celebration at his Mar-a-Lago resort in Florida.

It’s true that Trump met privately with Schumer over cheeseburgers to try to hash out a compromise. But White House Chief of Staff John Kelly intervened to scotch the deal, while other staffers reportedly did a TV blitz to prevent Trump from making a bargain if coverage turned sour.

It wasn’t the first time Trump won a political fight by not showing up.

• During the Republican presidential primary, Trump skipped a Fox News debate over his criticism of moderator Megyn Kelly, instead holding a fundraiser for veterans in Des Moines. He did just as well on social media as he had when showing up for previous debates. (On the downside, the event drew the attention of future Pulitzer-winner David Farenthold on Trump’s charitable giving.)

• Shortly before the 2016 election, Trump’s campaign staff reportedly took over his Twitter account, allowing him to dictate tweets but not post them directly. The idea was to avoid a last-minute airing of grievances or insult that could cost him the election. After the election, Trump got his phone back and has continued tweeting on his own.

• During the confirmation hearings of Supreme Court Justice Neil Gorsuch, Trump reportedly fumed that the judge had called his attacks on the federal judiciary “disheartening” and “demoralizing” in meetings with senators, even mulling rescinding his nomination. But he said nothing publicly. (Trump disputed a Washington Post story on his reaction which ran later in the year.)

• In December, Trump skipped the traditional end-of-the-year press conference, the first time in 15 years that the President did not take questions from the press before heading out for vacation. But given his infamous 77-minute press conference in February or his controversial impromptu remarks on Charlottesville in August, that may have saved him worse news.

For Democrats, President Trump’s tendency to stir controversy keeps their grassroots engaged and ensures that he stays at the center of the news. Considering that Trump has only a 36% percent job approval rating right now, that could help them in the fall elections. But if Trump heeds the lesson of the shutdown and keeps quiet, Democrats could find themselves without a foil. 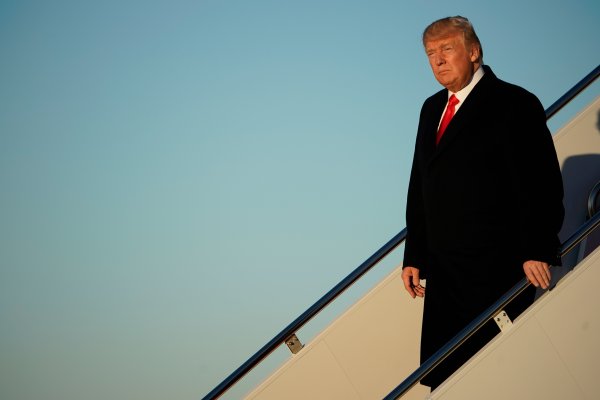 Trump Slams Tariffs on Solar Panels
Next Up: Editor's Pick