A Michigan man has been arrested for allegedly threatening to carry out a mass shooting at CNN’s Atlanta headquarters in a series of hostile phone calls earlier this month.

The man threatened CNN operators in 22 separate phone calls on Jan. 9 and 10, in which he allegedly called the network “Fake News” and threatened CNN employees with violence, Atlanta CBS affiliate WGCL-TV reported. “I’m coming to gun you all down,” he reportedly said.

“I’m smarter than you. More powerful than you. I have more guns than you. More manpower. Your cast is about to get gunned down in a matter of hours,” the man allegedly told a CNN operator, according to WGCL-TV. “I am coming to Georgia right now to go to the CNN headquarters to f—ing gun every single last one of you.”

The FBI launched an investigation into the caller, who was identified by released federal court documents as Brandon Griesemer of Novi, Michigan, a suburb of Detroit, according to ABC15 Arizona. Local police had previously looked into threatening calls made from the same phone number to the Islamic Center of Ann Arbor, Michigan in Sept, ABC15 reports, helping a CNN-employed investigator trace the calls to a number associated with Griesemer’s parents.

CNN said that it “takes any threats to CNN employees or workplaces, around the world, extremely seriously,” in a statement posted to Twitter.

“This one is no exception,” the statement continued. “We have been in touch with local and federal law enforcement throughout, and have taken all necessary measures to ensure the safety of our people,” the statement read.

CNN has been singled out as a particular target for media criticism under President Donald Trump’s administration, with numerous White House officials dismissing the network’s reporting as “Fake News.” Trump has repeatedly retweeted images or cartoons doctored to portray violence against the CNN logo, and complained in Nov. that the network’s international operation portrays the U.S. “very poorly.”

CNN was cited in four of the 11 “Fake News Awards” the administration unveiled last week to highlight what it claims is unfair treatment by the press — the most of any news organization. 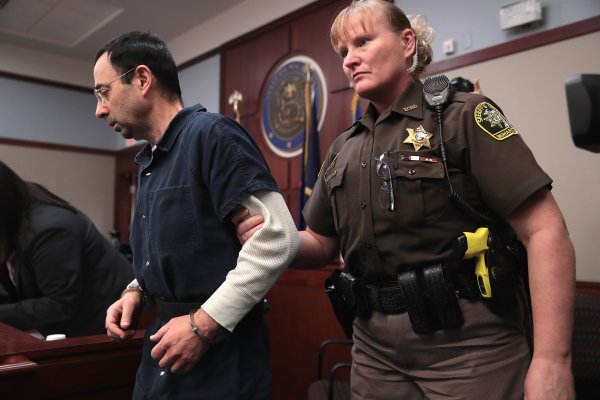 Larry Nassar Accuser Says She’s Still Getting Bills for Appointments Where She Was Abused
Next Up: Editor's Pick