A journalist protests the arrest of Reuters journalists Wa Lone and Kyaw Soe Oo (pictured in posters behind) in Pyay, Myanmar on Dec. 27, 2017.
Thiha Lwin—AFP/Getty Images
By Feliz Solomon

It’s hard to hide a massacre, but that hasn’t stopped Myanmar from trying. Satellites see the destruction, survivors speak out, and few things make reporters more determined fact-finders than being told their senses have tricked them. Though as hard as it is to conceal, the truth is also difficult to prove; courts require layers of evidence.

So it was alarming when Wa Lone and Kyaw Soe Oo, two Burmese reporters for Reuters, disappeared one night in mid-December, after accepting an invitation by police officers to meet over dinner. Authorities later said the pair, held incommunicado, had been arrested for possession of “official secrets” related to a military campaign in the country’s west, intending to share them with foreign media.

Their continued detention after appearing in a Yangon court on Tuesday was the latest disappointment in Myanmar, where what briefly looked like democratic progress is being violently derailed. But the real moment of truth came and went during a televised address last year, when Aung San Suu Kyi, the Nobel laureate who now leads the government, remained mystifyingly silent about allegations that the military abused the country’s one million Rohingya Muslims. The common conclusion was that she was either politically handicapped by the military, which still controls key levers of power, or delusional.

The violations Myanmar’s security forces are accused of are a global concern; the U.S. called it ethnic cleansing, while the U.N. human rights chief said he couldn’t rule out “elements of genocide.” Fleeing what they described as a campaign of arson, rape and murder, more than 655,000 Rohingya, a persecuted and mostly stateless minority, fled to Bangladesh since Aug. 25, when an insurgent attack triggered army reprisals. The world was left with a moral crisis, a staggering food and medical emergency and a new security threat; the more Rohingya suffer, the more violent extremists will co-opt their cause and try to recruit them.

Despite official denials, a partial picture of what happened to the Rohingya exists largely because news organizations, and especially Reuters, have documented it. In 2014, Reuters won a Pulitzer Prize for exposing the human trafficking networks that caused a regional migration crisis and killed thousands of people. After elections in 2015, their Yangon bureau expanded while others were in retreat, posturing them on the frontline as the current crisis unfolded. Their reporting may have helped corner the army into a rare admission of the existence of a mass grave bearing 10 Rohingya bodies.

The two reporters now facing 14-year prison sentences were recently hired by Reuters, plucked from jobs at local newspapers. Friends and colleagues say Wa Lone, 31, is known for his kindness and love of literature; he has written a children’s book, and devoted much of his spare time to charity work benefiting orphans. Kyaw Soe Oo, 27, is a Buddhist who grew up in Rakhine state, ground zero of the Rohingya crisis. He reports impartially on the ethnic and religious conflicts that ripped apart his hometown. In another nation they’d be seen as heroes, not criminals.

“It is entirely clear that they are innocent,” Stephen J. Adler, president and editor-in-chief of Reuters, said in a recent statement, calling their arrest “an egregious attack on press freedom.” Reuters, the U.S. government, the E.U. and the U.N. all called for the pair’s release, but they still spent more than a month behind bars. The case has had a chilling effect on other journalists, who fear they may be next. “But we should not stop doing what we always do,” says Aung Naing Soe, a Burmese photojournalist who himself was recently jailed two months for flying a drone near the Parliament. Even though, he adds, “we don’t know what will happen tomorrow.”

Myanmar’s Official Secrets Act is a colonial-era law that criminalizes the intention to share anything the government wants to conceal. A senior member of the ruling party has suggested Wa Lone and Kyaw Soe Oo may have been entrapped; the defendants told family members they were apprehended moments after the police who invited them for dinner handed over documents believed to be related to security operations in Rakhine. In a country transitioning from dictatorship to democracy, with little protection for either journalists who expose state crimes or for whistleblowers, Reuters tested the waters. They appear to be unsafe.

Myanmar is a place where ugly realities are often derided as “fake news,” and the credibility of trusted institutions is under attack. Suu Kyi said in September that a “huge iceberg of misinformation” was exacerbating the crisis. The country’s state-run newspaper has published op-eds accusing international media of colluding with terrorists. Yanghee Lee, the U.N. Special Rapporteur on Human Rights in Myanmar, was barred last month from entering the country because her assessments were seen as “biased and unfair.” She called the move a strong indication the government is hiding “something terribly awful.”

Myanmar and Bangladesh have agreed to soon begin returning hundreds of thousands of Rohingya refugees to Rakhine, despite warnings from human rights groups and U.N. agencies that it’s too soon. If the process resumes, after it was postponed Tuesday amid clear opposition from refugees, they’ll be sent back into a black hole where aid is restricted, U.N. specialists and journalists are barred, and at least one mass grave has been found. Whatever happens in that void, Myanmar authorities don’t want anyone to see it. 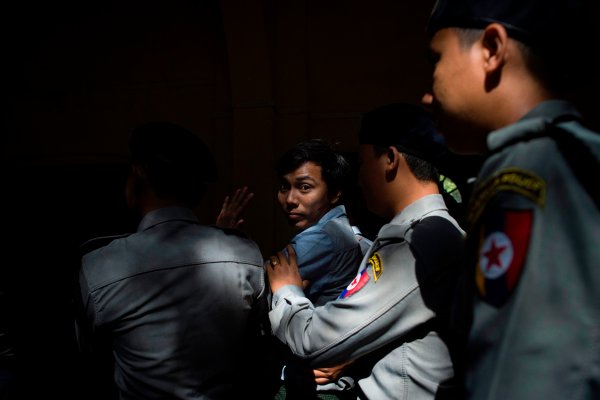 Myanmar Journalists Targeted for Speaking Truth to Power
Next Up: Editor's Pick