Nearly 25 years ago, separated by the wood-framed walls of a compound outside Waco, Tex., David Thibodeau and Gary Noesner stood on opposite sides of history.

Thibodeau was holed up inside the 77-acre Mount Carmel building with about 100 followers of his Branch Davidian sect, including the controversial religious group’s leader, David Koresh. Noesner was the FBI’s chief negotiator in the conflict that became widely criticized as one of the worst government failures of the 1990s after 75 people died.

Now, the two men have united for the first time to relive the tragedy together as advisers on the set of WACO, Paramount Network’s six-part television miniseries, which premieres Wednesday. WACO stars Michael Shannon (The Shape of Water) as Noesner and Taylor Kitsch – of Friday Night Lights fame – as Koresh.

Although Thibodeau and Noesner still don’t see eye-to-eye on certain details of the tragedy, they agree more than they disagree about what went wrong during the 51-day standoff and the deadly fire that ended it.

“It was like going back in time,” Thibodeau, one of only nine Branch Davidian members to survive the standoff, told TIME. “It was so profound.”

On April 19, 1993, Thibodeau watched in horror as his compound burned to the ground, killing 75 people, including Koresh and several children. The fire broke out 51 days into an FBI and Branch Davidian standoff, which began after an attempted government raid on the complex ended in a shootout between the Branch Davidians and federal agents. Four ATF agents were killed, records show.

Smoking fire consumes the Branch Davidian Compound during the FBI assault to end the 51-day standoff with cult leader David Koresh and his followers.
Gregory Smith—Corbis via Getty Images

The law enforcement agents were trying to raid the building and arrest Koresh on charges of unlawful possession of a destructive device when they said they came under heavy gunfire on Feb. 28, 1993. After the shootout, Koresh and his followers locked themselves inside the building for months until the flames came.

The cause of the fire has remained a point of contention, although an independent arson investigation determined the fire was started from within. The FBI claims the people inside the complex deliberately started the flames, while the Branch Davidians argue the FBI was behind the deadly fire.

Paramount Network recreated the site, which is where producers had Thibodeau and Noesner — both consultants on the miniseries — meet for the first time, surrounded by curious onlookers.

“You could tell — the looks on people’s faces. People definitely had the preconceived notion of what was going to happen,” Thibodeau said.

Noesner and Thibodeau said people were worried they might break out into a fight. But the two men kept their cool and heard each other out. “It was very civil,” Thibodeau said.

“You take kind of baby steps,” Noesner told TIME. “We have some different perceptions of things. I think that’s OK. We don’t have to agree.”

Gary Noesner and David Thibodeau of Paramount Network's 'Waco' pose for a portrait during the 2018 Winter TCA Tour at Langham Hotel on January 15, 2018 in Pasadena, California.
Maarten de Boer—Getty Images

Noesner, now 67, and Thibodeau, 48, both disagree about certain things, including the cause of the fire. But they agree there are important lessons to be learned from Waco, mainly how aggression can escalate tense situations and how working together could ease tensions.

“We are too quick to use force when we are frustrated. That’s losing self-control,” said Noesner, who ran negotiations for the first 25 days of the Waco standoff before he was removed because he says his superiors saw him as an “impediment to those who wanted to take a more aggressive role.”

On the last day of the siege, Noesner said he was called into the FBI’s headquarters to watch the monitors, for reasons he still doesn’t understand. “I watched the fire. I got angry, and I walked out,” he said. “I got more angry than I had ever been in my life.”

Thibodeau, now a musician in Maine, said he has held onto that same anger for a long time. In the two decades that followed, Thibodeau said the Branch Davidians were vilified for being cult members and for being allegedly at fault for the fire and siege. “The spin was in, the demonization — all of it,” he said. “It’s incredibly hard to fight against as an individual.” Thibodeau demurred when he was asked about his religious beliefs today.

He said he felt nobody in America wanted to hear his perspective until now, with the release of the Paramount miniseries. “I think this is going to change a lot of things,” he said. “People are being humanized for the first time.”

Thibodeau was on set throughout the show’s entire production. There, he watched the Mount Carmel compound burn down again. 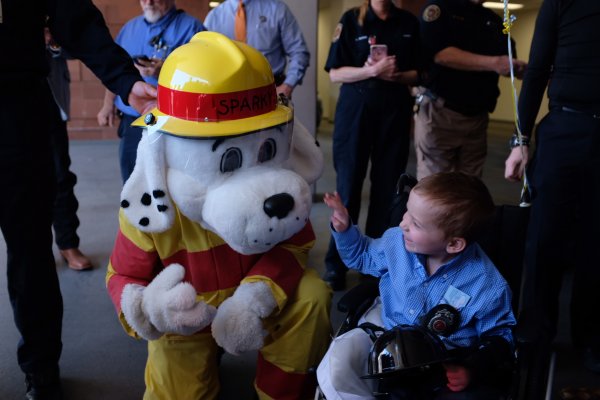 6-Year-Old Texas Church Shooting Survivor Got a Hero’s Sendoff As He Finally Left the Hospital
Next Up: Editor's Pick