One Man Made Childbirth a Nightmare for Me. Another Turned it Into a Gift

I had been distantly aware of a person to my left for some time. It was a man, nearing middle age, in hospital scrubs and mask, standing with his back against the wall of the operating theatre, just outside my field of vision. He was not taking part, but watching.

I still don’t know who this man was and I never will. His scrubs were beige; everyone else’s were blue. Was he a hospital orderly, a surgical student, a porter, a nurse? I have no idea.

What I did know, at the time of our encounter in the operating theatre, was three things: that the baby was out and somewhere over in the corner, screaming and being attended to, that I was desperate to lay eyes on him, that I was in trouble. My heart was galloping. Will, my husband, was being gripped by the arm and hustled away by a nurse. The floor was awash with blood and people were running. It is never a good sign, I’ve found, when medics run.

Five months earlier, I had tripped along to my appointment at a large London hospital with a friendly registrar. I explained to her that, as a child, I’d had a virus that meant I was in a wheelchair for a year and left me with mild muscle, nerve, and brain damage. The neurologists and pediatricians who had looked after me said that, should I ever have children, I would need a Caesarean. I had sustained damage to the neuromuscular junctions in my spine and pelvis, which meant that labor would begin but not progress; the contractions would not be strong enough.

I got halfway through my speech before the registrar nervously interrupted me.

“I’ll have to check this with the consultant,” she said, and scurried away.

A tall man with severe comb-tracks in his black hair came in, the registrar behind him. She introduced me and he took my proffered hand, but instead of shaking it, he used it to yank me bodily up out of my seat.

I wish now I’d left there and then, but at the time I was so astonished I complied.

“There is nothing wrong with you,” he pronounced, after he’d seen me take two steps. “You will have a normal delivery.”

I started to ask for clarification but the consultant — we’ll call him Mr. C — talked over me. Caesareans were a cult, he said, a fashion. I had been reading too many gossip magazines. I assured him this was not the case but he shouted me down again: Did I realize that Caesareans constituted major surgery? Why had I allowed myself to be swayed by celebrities? Did I doubt his medical expertise? What was wrong with me, that I was so afraid of a bit of pain?

Angry now, I attempted to say that I was in fact quite used to pain, but he surveyed me with an expression of utmost contempt.

“This illness you claim to have had” — he turned at this point to eyeball the registrar, who was hovering by the door — “Encephalitis, was it?” The registrar nodded and Mr. C turned his gaze back to me. “Do you have any proof?” he said, a slight but triumphant smirk curling his lips.

Mr. C shrugged but continued to stare at me in a way that seemed practiced, habitual. Was this his tried-and-tested method for humiliating pregnant women into submitting to his will? It seemed that way.

“Well, I suppose I could get my old hospital notes,” I said, after a moment, holding his gaze.

He narrowed his eyes, tapped his pen on the desk. And then Mr. C had had enough of me. He rose to his feet, dismissing me with a wave, and delivered his parting shot: “If you had come to me in a wheelchair, maybe then I would have given you a Caesarean.”

It was an extraordinary thing to say to anyone, let alone someone who has actually been confined to a wheelchair. It wasn’t Mr. C’s refusal to discuss my case, never mind grant me an elective Caesarean, that horrified me, it was his implication that I was some kind of malingering coward, trying to lie my way into an easy birth.

When I got home, Will, listened to my incoherent, rambling account of the appointment. He phoned the hospital and spoke to the registrar who said that, yes, I could change hospitals if I wanted to but the other options were quite a distance from where we lived. What might be better, she said, was if I stayed at the hospital but changed consultants. I wouldn’t have to see or speak to Mr. C ever again, if that was what I wanted.

That was exactly and precisely what I wanted. So I stayed at the local hospital. I changed consultants. I scribbled out every instance of Mr. C’s name from my notes with indelible ink and wrote in the new woman’s name.

As things turned out, the predictions of the neurologists from the 1980s were right. My labor went on and on but didn’t progress. I kept trying to explain; Will kept trying to explain. “The thing is,” I said, addressing a midwife, “I had acute encephalitis as a child. Severe cerebellar ataxia. Neurological damage. Vestibular malfunction. Please check my birth-plan, my notes. It’s all in there. My neuromuscular junctions are” — here, I yanked the gas-and-air mask off my face — “they are . . . they are . . . faulty and they said I’d need a . . . a . . . Wait, wait, where are you going? Come back.”

On the morning of my third day in labor, who should appear at my bedside but Mr. C. I wanted to shout, “Not you, anyone but you,” but I knew, in some shape or form, that my baby’s life was in his hands, my life was in his hands. He was the only consultant on duty that morning. So I was polite. I may have even smiled as I begged him for a Caesarean, from my prone position on a bed, getting out the words between contractions.

He glanced at the charts of my baby’s dipping heart-rate, read over my notes, perused my birth-plan, then granted me surgery, in the manner of a landowner bestowing a favor on a serf. But Mr. C still had me down as a hysteric. It would, he said, go down in my records as “by maternal request” — that is, medically unnecessary. This, despite three days of labor, the induction drugs, the non-progression, the diagnosis by neurologists.

The problem, it turned out, had been that the baby had become wedged in what is termed “star-gazer presentation.” This made it difficult for the surgeons to remove him and, somehow, in the ensuing wrestling and grappling, clutching and heaving, something had ruptured. All that should have stayed inside had come out.

We had agreed, Will and I, that he would stay with the baby in any eventuality. “Don’t let it out of your sight,” I had exhorted him. I had read too many novels and watched too many films about babies swapped at birth, babies who weren’t issued with an identity bracelet.

In the hospital, while the medics put my innards back inside, Will kept his promise. But then I couldn’t see him and the baby any more. They seemed to have been taken elsewhere, behind a screen or into another room. I was given more of whatever is in the drip. I raised my hand. I’m not sure, now, what for. To call a halt? To say, enough? To say, help me, please?

Suddenly, the man in beige was suddenly there. He stepped towards me, away from his wall, and took my raised hand. He enfolded it in both of his. I gazed up at him mutely. I had not known, until that moment, what a lonely experience it is to be in danger, in the middle of a room full of people who are frantically working to save your life.

He moved my hand so that it is curled around his wrist, and he places his other hand on top of it. His touch was infinitely gentle but firm and sure. He stayed with me while they stitched and stapled me together again; he took the weight of my head and shoulders as they lifted me from the operating table onto a gurney. He was there when they pushed me into a ward.

After that I lost sight of him. Did the man see me reunited with my son? I hope so.

He taught me something about the value of touch. I didn’t know, as I lay there, that I would think of him many times in the years ahead. When my son lay on a hospital bed, age four, with the raging fever of meningitis, I reached through the bodies of the attending doctors and held his slack, heated hand in both of mine. When my youngest child disappeared beneath the waves of the Mediterranean Sea and I had to leap in, haul her out, turn her upside-down so that the water drained from her lungs. Then all she and I could do was sit on the sand, wrapped in towels, contemplating what had almost happened, her small fingers wrapped in mine. When my middle child had eczema so torturous it made her scream and writhe through the night, I would press my hands over hers to stop the scratching, to ease her back towards sleep.

The people who teach us something retain a particularly vivid place in our memories. I’d been a parent for about ten minutes when I met the man, but he taught me, with a small gesture, one of the most important things about the job: kindness, intuition, touch, and that sometimes you don’t even need words.

Adapted from the book I Am, I Am, I Am: Seventeen Brushes With Death, by Maggie O’Farrell. Reprinted with permission of Knopf. 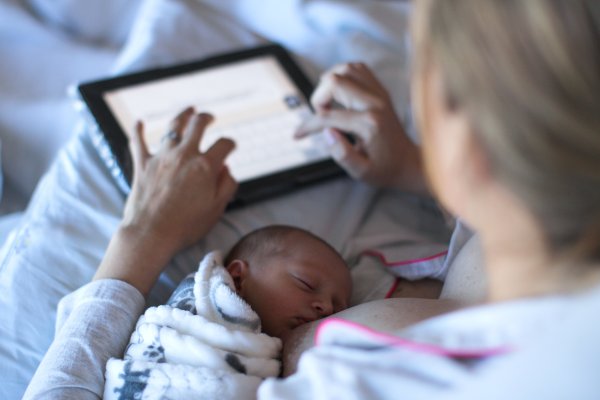 Exhaustion, Incontinence and the Messy Reality of Returning to Work After a Baby
Next Up: Editor's Pick