The Shutdown Ended Because Democrats Lost Their Spine

In a stunning show of blind trust, Senate Democrats believed Mitch McConnell’s promise that they could work on an immigration overhaul in the coming weeks if they gave him the votes needed to end a government shutdown Monday.

The midday vote ended a government shutdown that began last week when Democrats demanded action on young immigrants, known as Dreamers, who were brought to the country illegally as children. After three days of stasis, the Democrats blinked first and agreed to turn the government’s lights back on with only a verbal commitment that they could try to hammer out a deal for Dreamers in the coming weeks.

“McConnell made this commitment publicly on the floor of the Senate. He was much more specific than he was last night. And I think this is an important opportunity to demonstrate that he’ll carry though,” Sen. Angus King, a Maine independent who caucuses with the Democrats, told reporters outside the Senate floor ahead of the noon vote — a vote that had been scheduled earlier, for the unusual 1 a.m. hour.

An initial vote on the stopgap plan cleared the Senate, 81-18, seemed ready for an easy clear on a final vote and then a trip to the House for its members’ sign-off.

The backroom drama was all but certain to have deep ripples through the activist base in each party. Democrats yielded on their demands for Dreamers, while Republicans had moved away, at least temporarily, from a hardline policy against anything they branded as amnesty. Both sides seemed headed toward a collision with the activists in their corner.

At the same time, both parties nervously refreshed Twitter to see how the President might react to the news, or if he would again wade into the complicated question of immigration without a consistent position or clear goals.

“These days, you never know who deal with when it comes to the Republicans,” said Senate Democratic Leader Chuck Schumer, who added he hadn’t spoken to Trump since Friday as he rose to give support to the end of this crisis. “The great deal-making President sat on the sidelines.”

But Schumer nodded toward the cleavage he was walking toward with his own party: “This procedure will not satisfy everyone on both sides, but it is a way forward.”

The temporary, three-week measure funds the government in exchange for a pledge that Senate Republicans would allow separate discussions on how to protect the 800,000 young people who are known as Dreamers. Democrats had sought to couple the two issues and through the weekend refused to provide the Republican-led Senate enough votes to keep the government’s doors open.

The government ground toward a complete shutdown as the clock ticked from Friday into Saturday. The midnight funding lapse prompted the government to curtail services and paychecks to its employees. Several departments and agencies turned to rainy-day funds to cover operations, although those reserves were finite.

In any event, both sides spent the weekend attacking rivals for the shutdown and trying to game out the political victories. Most Republicans insisted they would not reopen the government until the Democrats abandoned their promises for the Dreamers. Democrats said there were no reasons to trust Republicans would follow-through on their plans to consider immigration legislation. After all, McConnell made similar promises to his own Republican lawmakers in December to win enough votes on legislation cutting taxes.

Yet, without securing any concessions beyond moving a deadline to do this again in three weeks instead of four, Democrats shuffled to the Senate floor to pass essentially the same bill that they voted down Friday night.

“Now comes the test, the real test, if we can get this done,” said Sen. Dick Durbin, the Democrats’ pointman on immigration negotiations who had held out hope for a Dreamer bill. “To all the Dreamers who are watching today, don’t give up. I know your lives are hanging in the balance.”

Progressive groups were not in the mood for a pep talk. “Any plan to protect Dreamers that relies on the word of serial liars like Mitch McConnell, Paul Ryan or Donald Trump is doomed to fail,” said Murshed Zaheed, political director of liberal CREDO.

In the end, though, Democrats decided to set aside their political consideration and picked up the human costs of the policy. Many lawmakers helped the Dreamers sign up for the program on the promises that if they acknowledged their legal status and petitioned the government for leniency, they would not be deported. In effect, these young immigrants created a registry of those in the country illegally, and the Trump Administration announced the program was ending and set a March deadline for its termination.

That left hundreds of thousands of immigrants and their families in limbo, along with paychecks for men and women serving in military uniform. “These kids or those kids,” offered Rep. Seth Moulton, a Massachusetts Democrat and veteran, setting up a choice of which young people would get the attention of Congress. Moulton, a former Marine Captain, said the political posturing left too many young people — those born in the United States and those who came here shortly after birth — in a grey area for political points. “Our children deserve better. The American people deserve better than this utter lack of leadership,” he said Monday.

Even so, it wasn’t clear the Senate-backed version would be popular in the House. It barely passed late last week on the promises that hardliners would get a chance to push their own bill. Talk of compromise in the Senate was unlikely to preserve votes among Republicans, and Democrats in the House weren’t eager to place their trust in Republicans. After all, a popular bipartisan immigration plan cleared the Senate in 2013 only to die in the House, where Republicans refused to take it up for a vote.

Democrats’ leap of faith was likely to cause reverberations among the liberal base, especially those who spent the weekend marching in the streets to mark Trump’s first year in the White House. Many of those women and men hoisted signs demanding protections for Dreamers and the extension of their Obama-era shield, officially called the Deferred Action for Childhood Arrivals.

Some Democrats were similarly dubious that their votes were not in folly. McConnell has proven a shrewd tactician and an unreliable dealmaker. To secure the votes needed to pass the tax cuts late last year, he promised Sen. Susan Collins of Maine a package of fixes to shore up the Obamacare health systems; those have not come to the floor. McConnell told Sen. Jeff Flake he could help shape an immigration plan in exchange for his tax-cutting vote; he’s been sidelined in this process and, late Sunday, said he’d vote yet again to give McConnell a win. And Democrats still have not gotten over McConnell’s norm-breaking decision to refuse to consider Barack Obama’s nominee for the Supreme Court until there was a new President elected.

Schumer gave McConnell a warning against walking away from the deal, especially given Congress will be back at the same deadline in early February. “He will have breached the trust of not only Democratic Senators, but members of his own party as well,” Schumer said of his Republican counterpart.

Yet it’s not clear that Democrats will have the same leverage in the coming weeks, or that McConnell would heed their threats. “A strategy to shutdown the government over illegal immigration is something the American people didn’t understand — and would not have understood in the future,” McConnell said, perhaps ominously warning against trying such a tactic again.

At the same time, the McConnell pledge does not bind the House, where immigration hardliners were unlikely to accept anything sent to them from the more moderate Senate. Ryan, who faces a revolt from his right flank, said the House would back the three-week bill, but he was able to get his part of the government funding process through the House only with the promise that he would allow a vote on a far-right immigration bill that is similarly doomed in the Senate. It’s not clear how a hardline House version and the more moderate Senate-backed Dreamer proposal can coexist.

The tradeoffs seem predicated on promises that everyone has reason to doubt. McConnell is unlikely to give Democrats their win on DACA, especially if it can’t guarantee the President’ signature. Ryan can’t deliver protections for Dreamers as his hardliners stand in lockstep against any compromise. House Democrats are not eager to bail out Ryan with a handful of votes to get him over the finish line on major legislation. And the strongest activists in both parties threaten — perhaps with primary challenges — incumbents who don’t hold firm against compromise.

“Sadly, most in Congress, Republicans and Democrats alike, are ready to standby and drown taxpayers in a river of red ink without making tough choices on spending,” said Jason Pye, a vice president at the libertarian FreedomWorks.

In short, lawmakers on Monday were ready to jump off a cliff together. What awaits them is unknown, but it’s almost certainly not the warm embrace of their bases. If anything, they might do well to invest in noise-canceling headphones. After all, the activists in both parties have shown they are loud and ready to confront those who defy orthodoxy at their homes. 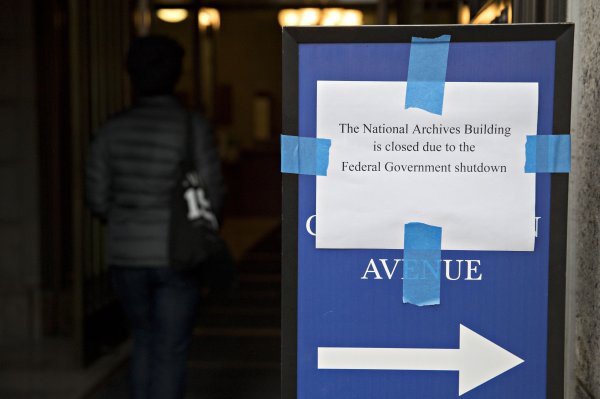 The Government Shutdown Is Almost Over After a Key Vote in the Senate
Next Up: Editor's Pick