I Quit My Job to Advocate for Sexual Assault Survivors

Majoring in American Studies and Drama doesn’t do much in the way of preparing you to choose a job after college. I settled on what made sense, and that was to aim for a job in the advertising industry. It was accepted in our house: I come from a family of engineers, accountants and doctors, and my academic interests didn’t make sense to them, but a career in advertising did. It felt good to be on a track that everyone was on board with.

Then, at the beginning of my junior year, I was studying abroad in Dublin when I was sexually assaulted by another person in the program.

I was in another country and didn’t know how the laws worked, didn’t know who to tell. I was afraid of the general fallout, and I didn’t do anything about it until I was back in the U.S. When I returned, I went to therapy, but trauma is a hard thing to solve, especially when you’ve spent so much time not talking about it. So I turned to theater writing. I was about to start my senior year and begin work on my thesis, and I kept thinking, “What if I looked at sexual assault in an academic setting?” It wasn’t something I knew much about, but I thought I could use theater as an educational tool to connect people emotionally to the issue.

Unfortunately, writing a one-person show became isolating for me as I revisited traumatic memories over and over again. I ended up getting depressed and thought of hurting myself.

So I restarted, this time writing the show to include three characters. This brought in other women and allowed us to address more issues and perspectives, making the play truly educational. Our show created a special community of women supporting each other, a network of people who were there for each other and who were working on making an impact together. The end result of the project was not only a production that I was really proud of, but it was also a healthy way for me to move past the assault.

Now I wanted to do more: to speak out louder on the topic, help build stronger support systems, work personally with other survivors. I had a decision to make, and time was short. It was the end of April when the show wrapped, and I was graduating in mid-May. I always thought I wanted be in New York, and I had interned at an advertising agency there the previous summer. Suddenly, there was this other thing I really cared about — but could it be a career? Professionally, I didn’t know what pursuing sexual assault advocacy looked like. Emotionally, did I want to do that to myself? I had already been in a really dark place in dealing with the subject, and I didn’t want to be depressed, or upset, or put pressure on myself. And I questioned my abilities: how good could I be at helping others with something that I couldn’t handle on my own? So I stayed the course for advertising in New York, with an aim toward finding a balance: I’d take the advertising job and volunteer with sexual assault victims on the side.

Adult life began, and I set out to volunteer as a rape crisis counselor through a hospital program that trains volunteers to help survivors of sexual assault when they come to the emergency room. We would guide people through what was happening, but we were mostly there to be a friend for the victims as they came in. The training program was exactly what I wanted: a concrete, meaningful outlet. I said, “Okay, now I can focus on my day job because I have this on the side.” In retrospect, I already knew what my priorities were, but I tried not to take notice. Meanwhile, everyone at the office said, “You’re doing a good thing. As long as you’re getting your work done, it’s fine.”

Those first seven or eight months were a difficult juggling act. I was handling a new city with a new job and a very new context for dealing with a tough subject: it’s one thing to talk about sexual assault on a policy level; it’s another to get into the nitty-gritty of being told someone has been sexually assaulted and is sitting in the emergency room waiting for you. But the work I was doing felt important, and I’d leave the hospital exhausted but happy, satisfied that I was playing a small part in helping people.

It was St. Patrick’s Day. I was on the night shift and at 11 p.m., and a young woman about my age came in. I was assigned to help her. As a rape crisis counselor, sometimes your job is just to distract the survivor, so we spent hours together just talking, laughing. At one point, a nurse came in and said to me, “I thought you were the advocate.” I told her I was. “Oh, do you two know each other?” We had met that night, I responded. “That’s so wonderful! It just seems like you two are such good friends.”

That was when I knew. It was 8 a.m. when I left my shift and went straight to the office for my advertising job, in my same clothes from the night before. I hadn’t slept, but I didn’t care. I felt like I’d actually made a connection with someone — I’d made a real difference in that person’s life. I showed up to work, and everyone was yelling about advertising, and I just sat and watched, absolutely exhausted in my yoga pants. I thought, “I can’t do this anymore. I just can’t do this anymore.”

It’s not that I had a problem with anyone in my job or in the industry. I think people mistake that part of the jump process — as if there’s always some clear adversary or bad guy that you jump from — but that’s not accurate. The truth is, whatever it is you’ve been doing, it becomes really hard to keep doing it when you identify a new value system and new priorities. If you then find yourself surrounded by people, on a day-to-day basis, who don’t share those priorities or values — it’s not anyone’s fault — it just makes it very hard not to jump.

As I sat there at work, my jump crystallized. I was going to leave advertising and go to law school so I could become a full-time advocate for sexual assault victims. The area in the hospital where I was most helpful and where I was most productive was teasing out the legal part of what was happening. In terms of making an impact, knowing people’s legal rights was a really big deal — especially at a public hospital where you work with underserved populations. And I realized that as nice as it was to support people emotionally, leveraging the law was an important tool for actually improving their lives.

My parents were supportive of law school, but they were concerned. I hadn’t told them that I was assaulted until long after the fact, and when I did, it troubled them — I don’t think any parent can hear that and feel good. And now they were worried I’d be setting myself up to hurt even more. I probably would have shared that sentiment had I not planted the seeds prior to jumping: by now, I knew what my jump would look like. I knew what I could do, what I would feel. The volunteering, the brainstorming — it was helpful for my parents, but most important, it was helpful for me.

Telling everyone at the office was hard. For many people who work in advertising, that industry is the pinnacle of professions. For most of my colleagues, this work was all they wanted to be doing, and they were confused that it wasn’t what I wanted. When I announced I was leaving, the response was, “Okay, good luck, but I don’t know why you’re leaving.”

The one exception was my former boss. She is French, and her understanding of work-life balance and chasing down a passion is very different from the traditional American perspective. In the months prior to my jump, she would say, “You do a good job, but I can tell when you’re passionate about something and when you’re just doing it. And I know that you’re not passionate about this.” And when the day came to hug her goodbye, she whispered in my ear, “You’re absolutely doing the right thing.”

Walking out of the office, I felt relieved. I had started to resent myself for not making a move. I’d had the urge to jump, but in my head, I would think, “Well, they say that in the real world you’re supposed to stay at your job for at least a year, and how will it look on my résumé if I leave before then?”

Turns out the answer is, who cares? I hated getting up in the morning. I hated going to work. I hated staying any amount of time past 5 p.m., which in advertising, you just do. I was putting all this time and effort into something I didn’t care about. No part of it was fun anymore. Whatever you’re doing, when it gets to that point, do yourself a favor and jump. It’s only scary until you leave.

Kelly O’Hara, a former advertising associate, is a law school student with plans to become an advocate for survivors of sexual assault.

Excerpted from WHEN TO JUMP: If the Job You Have Isn’t the Life You Want by Mike Lewis, published by Henry Holt and Company. Copyright © 2018 by Mike Lewis. All rights reserved. 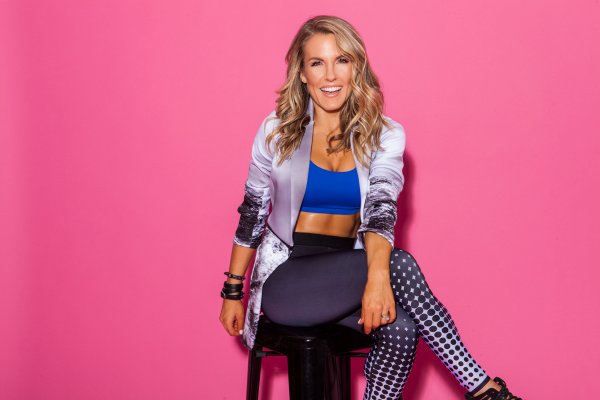 Anna Kaiser's Practical Advice for Keeping Your Fitness Goals
Next Up: Editor's Pick