On Monday, Megyn Kelly blasted Jane Fonda on her NBC show, adding fuel to a disagreement that kicked off in September.

Back in the fall, Fonda appeared on the Today Show with Kelly to discuss her latest movie with Robert Redford. When Kelly asked Fonda about her experience with cosmetic surgery, a tense exchange followed, and Fonda later criticized the question. It has come up repeatedly since then, even turning into a sharp joke Fonda delivered on another visit to the Today Show last week and in an interview with Variety published over the weekend.

Now, Kelly is speaking out about it, delivering Grace & Frankie star in a lengthy monologue on Monday. “Look, I gave her a chance to empower other women, young and old, on a subject which she purports to know well, and she rejected it, and that’s OK,” Kelly said. “But I have no regrets about that question, nor am I in the market for a lesson from Jane Fonda on what is and is not appropriate.”

She also brought up Fonda’s political history in the spotlight. “After all, this is a woman who is synonymous with outrage. Look at her treatment of our military during the Vietnam War. Many of our veterans still call her “Hanoi Jane” thanks to her radio broadcast which attempted to shame American troops,” she continued. “The moral indignation is a little much. She put her plastic surgery out there. She said she wanted to discuss the plight of older women in America. And honestly, she has no business lecturing anyone on what qualifies as offensive.”

In Variety, Fonda said she wasn’t “upset” by Kelly’s line of questioning, but rather “stunned.” “It was so inappropriate. It showed that she’s not that good an interviewer,” Fonda told the magazine, adding that she would consider returning to Kelly’s show if “she comes around and learns her stuff.”

Kelly debuted her spot at NBC in September after leaving Fox News.

Watch the full monologue below. 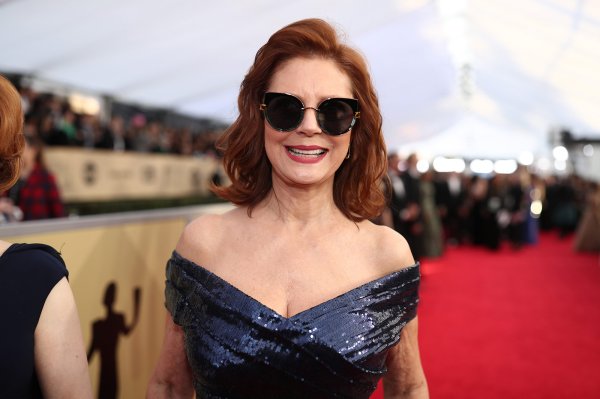 No One on Earth Can Deal With Susan Sarandon Rolling Up to the SAG Awards in Sunglasses
Next Up: Editor's Pick