The 2018 awards season started out wide open. Way back in December, even as initial screenings of The Post had some ready to call the whole thing early, there were still a number of contenders, any one of which felt like a viable indie David to Steven Spielberg’s Goliath. Then came January’s awards ceremonies — Golden Globes, Critics’ Choice, Screen Actors Guild — and the dominance of Three Billboards Outside Ebbing, Missouri had prognosticators asking, “Steven who?”

All of that happened before the nominations for the 90th Academy Awards were even announced. When they were, early Tuesday morning, the final act of the 2018 awards season began to come into focus. Although there’s still a ways to go before the Oscars air on March 4 —final ballots aren’t due until Feb. 27, later than usual thanks to the Winter Olympics — here’s what the 2018 Oscar nominations tell us about how this year’s awards are shaping up.

MORE: The Biggest Snubs and Surprises of the 2018 Oscar Nominations

The Shape of Water received the most Oscar nominations, with 13. Dunkirk followed with eight, while Three Billboards Outside Ebbing, Missouri continued its streak with seven. (While some might have expected Three Billboards to come out on top, The Shape of Water‘s dominance across technical categories gave it the edge, and Dunkirk performed strongly across those fields, as well.) Based on how Three Billboards has fared throughout awards season thus far, especially in the acting categories, its dominance isn’t surprising. But moviegoers’ enthusiasm for fellow Best Picture nominees like Get Out, Lady Bird, Call Me By Your Name and The Post makes Three Billboards‘ continued reign, especially in light of the controversy surrounding it, a bit of a head-scratcher. The Shape of Water looks like it’s squarely back in the running, but the narrative’s going to have to majorly shift if Three Billboards is to be dethroned before the first Sunday in March. Campaigners have their work cut out for them.

Get Out was released nearly a year ago in February 2017. Its genre, horror, is rarely recognized with glitzy mainstream awards. But the movie’s four nominations Tuesday morning proved that a socially relevant movie that manages to stay in the conversation months after its release can make a notable dent among the pack.

Similarly, Mudbound was positioned as Netflix’s major Oscar play for 2017, but its November release made a rather small splash during the first part of awards season. When the nominations were announced, however, Dee Rees’ historical epic received four nods, including two for Mary J. Blige, for Supporting Actress and Original Song. Mudbound and Get Out, both of which were written and directed by black filmmakers, are evidence that the Academy, especially with its newly diversified ranks, can see beyond convention every now and again.

Women are finally getting some recognition behind the camera

When Rachel Morrison was nominated for Best Cinematography for Mudbound on Tuesday morning, she became the first woman ever nominated in that category in the Academy Awards’ 90-year history. While it’s disappointing that it’s taken this long, her breakthrough is not exactly surprising, given that women comprise only 5% of Hollywood cinematographers.

Meanwhile, Lady Bird director Greta Gerwig became the fifth woman ever nominated for Best Director, after what many perceived as a snub at the Golden Globes — not least of all Natalie Portman, who called out the category’s all-male lineup when presenting the award earlier this month. Gerwig’s directing nomination, the first for a woman in nine years, comes alongside one for Original Screenplay. Taken together, these nominations may not feel like a sea change, but they represent incremental progress in an industry in which, most often, incremental progress is the best we can expect.

Women’s stories are increasingly seen as worthy of big awards

In years past, it was par for the course if a couple of the ten or so Best Picture nominees featured narratives about women. Last year, it was Arrival and Hidden Figures. The previous year, Brooklyn, Room and Mad Max: Fury Road. Always present, never dominant. This year, nearly half of the Best Picture nominees are about women, from The Post‘s story of a female publisher in a male-dominated industry to Three Billboards‘ story of a morally conflicted grieving mother looking for justice in all the wrong places.

Perhaps most momentous is the major awards recognition heaped upon Lady Bird, the story of a teenage girl’s interior life and her relationships to her mother, her best friend and her hometown. If movies about women are made, and taken seriously, less frequently than movies about men, movies about teenage girls have been relegated to their own even more blatantly condescended-upon genre. That a film about first love, teen angst and high school musical theatrics is a serious contender for Best Picture says a lot about what Academy members deem worthy.

#oscarssowhite remains in the rearview mirror, but there’s more work to be done

Last year, following 2016’s all-white crop of acting nominees, was a banner year for inclusion among Oscar nominees. A record-breaking number of people of color were nominated for acting awards, with Fences, Hidden Figures and eventual winner Moonlight among the Best Picture nominees. This year doesn’t quite repeat last year’s numbers, but the progress continues.

Octavia Spencer, Daniel Kaluuya, Denzel Washington and Mary J. Blige all received acting nominations, with Blige snagging another for Original Song. Mudbound‘s Virgil Williams and Dee Rees were nominated for Adapted Screenplay, making Rees the first black woman nominated in that category. The Big Sick‘s Kumail Nanjiani was nominated for Original Screenplay along with Emily V. Gordon, and Jordan Peele received nominations for Best Picture, Best Director and Best Screenplay, making him only the third person ever to do so for a debut feature.

The list goes on — director Yance Ford for documentary Strong Island, Chile’s Foreign Film nominee A Fantastic Woman, which stars transgender actor Daniela Vega, Kobe Bryant for the animated short Dear Basketball, Mexican director Guillermo del Toro and Pixar’s all-Latino animated feature Coco — and yet, as always, it is not difficult to see where there is more room for inclusion. The Best Actress and Supporting Actor fields are all-white, and there has still never been a black woman nominated for Best Director. There is still a very good chance that all four acting winners will be white. Representation of Latinos and Asian Americans, among other groups, continues to be paltry or even altogether absent, a reflection on the industry even more so than on the films the Academy chooses to recognize. Here’s to the progress made in 2018, and to an even better 2019. 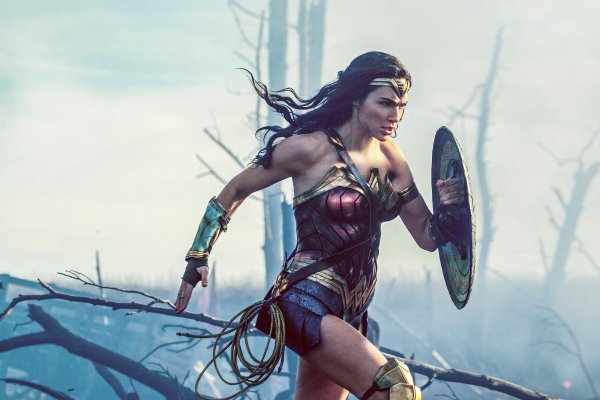 Wonder Woman's Oscars Snub Has the Internet Up in Arms
Next Up: Editor's Pick