When Morgan Freeman took the stage in a baseball cap to accept the Lifetime Achievement Award at the 24th annual Screen Actors Guild Awards, he had some pointed feedback about the statuette.

“Oh and one more thing. I wasn’t going to do this,” Freeman said as he was wrapping up. “I’m going to tell you what’s wrong with this statue. It works from the back…from the front, it’s gender-specific.”

The green statuette called “The Actor” depicts – in broad strokes – the figure of a nude male holding the comedy and tragedy masks. It’s created at the American Fine Arts Foundry in Burbank, California.

“Maybe I started something,” he finished, with his signature wry smile.

Before his closing remark, the audience rose to give him a standing ovation, and the 80-year-old veteran actor got down to his thank you’s. “This is beyond honor. This is a place in history.” He kept his speech short, thanking his kids, his life partner, and business partner, and Freeman’s onetime Electric Company co-star Rita Morena, who presented his award.

But his issue with the statuette’s gender was the line that really took off. People on Twitter were quick to react to his message amid the debate about gender inequality in the entertainment industry.

As far as awards show moments go, it has yet to rise to the level of “Winona face.” But someone did use this opportunity to invoke the most iconic moment of the 2017 SAG awards. 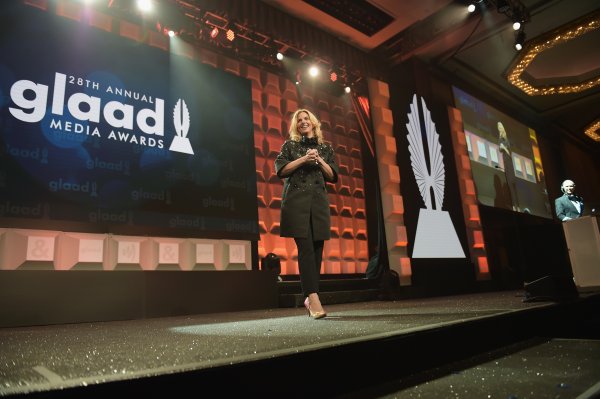 Here Are the 2018 GLAAD Media Awards Nominees
Next Up: Editor's Pick