It wasn’t just Democrats in Congress who complained about President Donald Trump Saturday. It was also Republicans, who grumbled just as loudly that they were not sure who in the White House was negotiating to end a partial government shutdown.

Which Trump was it: The ultimate deal-maker eager to deliver what eluded his predecessors from both parties or the firebrand who rode a hardline immigration stance to power? As with so many other moments of consequence for his presidency, it seemed the last person to speak with Trump determined his position.

For the President, it was not how he anticipated spending the one-year anniversary of his inauguration.

The White House’s budget director and legislative liaison made the rounds at the Capitol. Its press secretary called lawmakers “losers.” The chief of staff seemed to reverse his boss’ compromises with Senate Democrats and protect the President’s right flank. Trump, surrounded by protesters outside the White House gates, was trolling them on Twitter and raging that Congress was not bending to his will.

Some Republicans marveled that the focus for many leaders in the party was on shifting blame and scoring wins, not finding a way to reopen the government.

“Enough is enough,” said Republican Sen. Lindsey Graham of South Carolina, a lead negotiator in the immigration talks that are central to the crisis. “The idea of letting this continue to fester is unacceptable.”

“The White House position remains the same: we will not negotiate the status of 690,000 unlawful immigrants while hundreds of millions of tax-paying Americans … are held hostage by Senate Democrats,” White House legislative director Marc Short told reporters on Saturday. “We hope Senate Democrats will yield.”

The White House budget director Mick Mulvaney insisted all talk of the funding lapse should be branded “Schumer Shutdown,” after Senate Democratic leader Chuck Schumer. “It has that nice little ring to it, doesn’t it?” Mulvaney said, again arguing that talks with Schumer were fruitless. “At what point does it even become profitable to continue to work with someone like that?”

But if Republicans hope to reopen the government, the White House will need to work with Schumer and his caucus, where retreat was not an appealing option as Day One of the shutdown unfolded. Schumer’s top deputy, Sen. Dick Durbin of Illinois, briefed House Democrats on Saturday morning behind closed doors. From outside, cheers were audible, signaling a compromise was unlikely.

“The President created this challenge on September 5th,” Durbin told TIME outside the Capitol in the early hours of Saturday morning as he prepared to make his way home after a long night. It was on Sept. 5 that Trump declared an end to the Deferred Action for Childhood Arrivals program, or DACA, that protected many of the Dreamers.

“The Republican-controlled House and Senate have not produced a single bill to respond to this,” an exhausted Durbin said. “The President put the fates of these young people in doubt, and we have a responsibility to do something to help them.”

That call to action was echoed throughout the day as lawmakers marveled how a program Trump backed as late as last week suddenly was the sticking point.

“The only way out of this is for the President to take ‘yes’ for an answer,” said Schumer, who met with the President for 90 minutes over cheeseburgers late Friday afternoon. Schumer thought he was close to an off-ramp and indicated he could convince his colleagues to give the President some of the money needed for his border wall.

Frantically, Senate Majority Leader Mitch McConnell phoned the White House urging the President to stand firm against any deal shorter than four weeks and to void any hopes of compromise with Schumer. He also phoned House Speaker Paul Ryan and urged him to hold the line against compromise.

At the White House, advisers told the President that the Democrats’ offer was only for one year of border building, not the whole costs. That, for the moment, talked him away from dealmaker and back toward his hardline stance.

White House chief of staff John Kelly phoned Schumer on Friday to tell him that a short-term deal was not possible under these conditions.

“What happened to that President? He backed off at the first sign of pressure,” Schumer said, casting the President as a choke artist — a gamble that could provoke Trump.

Republicans continued to shove blame on the Democrats. They accused their colleagues across the aisle of placing politics above the health and well-being of American children, since the failed spending package contained funding for the Children’s Health Insurance Program (CHIP), which lapsed in September. They rejected the notion that their own party — which controls both chambers of Congress, and which has failed to bring CHIP to the floor in the four months since it lapsed — bore any responsibility.

“Bottom line, this was a clean bill, and it… is so obvious that they are putting the Obama legacy ahead taking care of children and supporting our troops,” Republican Rep. Evan Jenkins of West Virginia told TIME.

Speaking to reporters in the Capitol on Saturday, other House Republicans held their ground. Throughout this entire process — the tentative progress towards an immigration deal last week; the negotiations of a spending bill after that progress collapsed — these lawmakers had been the biggest hurdle to compromise. Unlike their more moderate colleagues in the Senate, a powerful faction of conservatives in the House is rigidly opposed to a bipartisan solution on DACA, preferring instead a hardline bill that would restrict immigration and amplify domestic enforcement.

But when asked if her colleagues would be amenable to an immigration compromise, Rep. Cathy McMorris Rodgers of Washington, the fourth-ranking House Republican, demurred. “The first order of business is to get the government funded,” she said. “We need more time [on immigration] — and that should not be used to put the country through this shutdown.”

There were whispers of disagreement among Republican leaders on the Hill. Reports indicated McConnell and House Speaker Paul Ryan were not on the same page; aides to each disputed those reports strongly.

Yet, there are limits to how much McConnell can unilaterally do. Spending bills have to start in the House, and it’s not clear Republicans in both chambers were of the same mind, or where the President might be on a final compromise. Ryan has a rowdy caucus to manage, McConnell will need Democratic votes to reach the 60-vote threshold to fund the government, and the President has proven unpredictable.

For his part, McConnell sought a way out of the crisis that didn’t hinge on the President’s consistency. He offered a possible deal to reopen the government through Feb. 8 — or so — and fund a health insurance program for poor kids for six years in exchange for a pledge that talks will resume on an immigration deal that would protect Dreamers. The three-week funding bill is a one-week reduction from the proposal that failed late Friday, a difference that seemed to make no difference to Democrats, especially if promises from the President were in the mix.

“This President just does not have a reputation for telling the truth,” said Democratic Rep. Maxine Waters of California.

As the Democrats huddled to discuss their options, they looked up to see split-screen coverage of a stand-still Capitol and scores of women marching against Trump’s agenda. Any skittishness about the decision to shutter government melted as they saw the grassroots activists filling streets from San Diego to New York. Republicans are worried they could lose their majorities in the House and maybe the Senate in this fall’s elections, and maintaining this energy among liberal activists is crucial.

“All I can tell you is there are a lot of meetings going on. I just came from one,” Sen. Angus King, a Maine independent, told TIME on Saturday afternoon as he walked down a hallway in the Dirksen Senate Office Building. The building was quiet and seemingly empty. “I don’t think I’d say I’m optimistic, but I’d say that everyone wants to get to a positive result.”

Republicans, too, were clearly frustrated. Against long odds, Ryan had cobbled together enough votes for a one-month funding plan by promising the most conservatives lawmakers a vote on a hardline immigration plan that has little chance of clearing the House, let alone find support in the Senate.

“We do some crazy things in Washington but this is utter madness,” the Speaker said, brimming with frustration. He later sent that observation to his email list.

It echoed McConnell’s pre-shutdown pique. Even as the government was hurtling toward running out of cash, the top Republican in the Senate said he wasn’t sure what it would take to get the the President’s sign-off. “I’m looking for something that President Trump supports,” he said. “And he’s not yet indicated what measure he’s willing to sign.”

In fact, some in the President’s negotiating team told lawmakers to pitch a Homeland Security outline of immigration demands. Hardliners inside the White House said the list was incomplete, and the President seemed to side with them. That effectively undercut Homeland Security Secretary Kirstjen Nielsen, a close Kelly ally, and sent everyone back into a chaos so familiar after a year of the Trump presidency.

That left many White House aides and their Republican counterparts on the brink of rage and undercutting each other in meetings. “How do we win against Congress if we can’t even agree among ourselves? We can’t even figure out what a win looks like,” a frustrated White House staffer said. “No one here knows how this ends.” 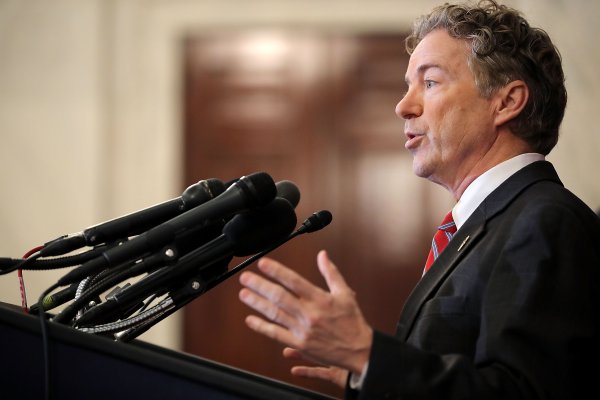