'It's a Women's Wave Coming.' The Women's March Is Turning Into a True Political Force

She couldn’t vote in 2016, but O’Connell is already doing everything she can to cancel out her brother’s throwaway ballot. She and her friends, Kaitlyn Viola and Briana Taddeo, both 17, plan to march whenever they can, make phone calls for candidates, and encourage their older relatives to vote responsibly. And this November, they’ll be showing up to the polls. “I’m definitely going to vote,” says O’Connell, who canvassed and phone banked for Bernie Sanders during the 2016 election, “even if I don’t have a candidate I strongly believe in.” (Taddeo, who will still be 17 in November, plans to convince her homebound grandmother to vote in her stead.)

One year after the Women’s March became the largest single-day protest in U.S. history, O’Connell and her friends represent the movement’s new direction: Doing anything and everything to wrestle control of Congress from a Republican Party that has largely worked to advance President Trump’s agenda. An unprecedented surge of Democratic women are running for office this year, but that’s just the crest of the “Pink Wave.” In interviews with some of those among the estimated 120,000 people who marched in New York City Saturday, a pattern emerged. If they’re not running, they’re organizing. If they’re not organizing, they’re donating. If they’re not donating, they’re voting. Nobody is doing nothing.

The official Women’s March organizers have translated this motivation into a new strategy for 2018: Power to the Polls, a nationwide voter registration drive targeting first-timers in swing states ahead of the midterms. Marchers have created their own ways to expand their political impact, too.

“Last year we were all in shock, angry we didn’t do more, says Diane Johnson, a 59-year old New York City real state broker. “Now we know we can’t let this ever happen again.” Johnson says she is personally making sure everyone she knows is registered to vote. She’s also making regular donations to Emily’s List, which supports pro-choice Democratic women candidates.

Lisette Cheresson, a 33-year old festival organizer, said that after last year’s march, she began attending local Democratic party meetings and learning the inner workings of New York local government. Her friend Erica Duncan, a 28-year old designer, joined the campaign to repeal New York City’s “cabaret law,” which made it hard for local businesses to allow dancing in their establishments. Lauren Barkley, a 30-year old fashion student, said she has given money to so many different causes over the last year that sometimes after a night of drinking she’ll wake up to an email thanking her for her contribution to Planned Parenthood or the ACLU — “drunk donating,” she calls it.

“I don’t think any of this would have happened if Hillary had won,” Cheresson says. “We would have continued to live under the assumption that we had broken the glass ceiling, when in fact we had only cracked it.” She likens this possibility to the Obama presidency, “when people thought racism was over, and really it wasn’t.”

Kim Hall, 45, says participating in last year’s Women’s March helped her meet other like-minded women in Wilton, CT. When they noticed that a local candidate for school board had posted confederate flags on Facebook and called on Trump to “build a wall,” they started a publicity campaign, organized against her, and got local organizations to pull their endorsements. “It wasn’t inclusive, and it didn’t belong on our school board,” Hall says.

In many ways, this year’s anniversary March was a celebration of everything the women’s movement has done in the last year, from organizing calls to Congress to coalescing around the #MeToo campaign. And throughout the March, there was a sense of personal agency, a feeling that any one person could make a difference moving forward. “What you’re seeing is an emphasis on the fact that women can make a change in the midterms,” says Kathleen McNamara, a 64-year old grants writer carrying a sign showing a pink tidal wave. “It’s a women’s wave coming.” 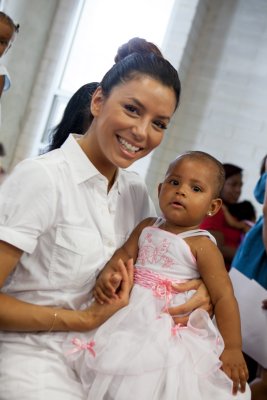 Eva Longoria: Helping Women Changes Communities for the Better
Next Up: Editor's Pick