'We're Going to Get Better at This.' Samsung Is Still Betting Big on the Smart Home

Silicon Valley tech giants and startups alike have for years been trying to drum up excitement around Internet-connected home appliances. But despite the push from companies like Samsung, Google and Apple, consumer adoption has been slow. Only 7% of households in the Americas were estimated to have connected home tech by the end of 2017, according to research from IHS Markit.

Shoppers have had good reasons to avoid smart home gadgets. They’re usually more expensive than their “dumb” counterparts, they can be complicated to set up and use, and the true utility they offer can be unclear.

For its part, Samsung admits the smart home revolution is taking longer than it might have hoped. But it’s taking steps to remedy the situation. At this year’s CES, the company announced that it’s unifying its various Internet of Things apps into one SmartThings app that will launch this spring, one step the company is taking to make the smart home world just a little simpler.

Yoon Lee leads Samsung’s U.S.-based innovations team, overseeing products from the company’s Internet-connected appliances to its virtual reality platform. Lee sat down with TIME to discuss the company’s smart home ambitions, why he believes the smart home is primed to succeed, and what the company has learned from past efforts. What follows is a transcript of our conversation lightly edited for length and clarity.

TIME: The promise of the smart home has always been to have your home appliances connected and communicating with one another. So why is Samsung only pushing this SmartThings ecosystem now?

Yoon Lee: The technology wasn’t right when we were continuously trying it. We thought we could do it, but the technology was holding us back. So we think it’s about the right time now because of all of the AI, the data science, 5G. Everything is really formulating the right environment.

The second reason is: If you’re a baseball player, the best baseball player hits .300, right? Does that mean you don’t have to swing the rest of the time? You have to. You have to not only swing, but you have to fail [in order to] . . . adjust your strategy and your reaction behavior to how you want to swing your bat. So on the third swing, you actually get a hit or a home run.

So I think what we’ve been doing in the past is exactly that baseball analogy. We had to do it. And we had to fail because the technology was not right. And we took a lot of learnings from that. Because of that, I think we’re in a better position than someone coming from the side and saying: “Look at those Samsung folks. They’ve done something really wrong in the past. We’re going to do it right.” No, they can’t. They’re at bat for the first time. We’re at bat for the fourth time. And that environment is correctly situated where I think that we can take off.

You said a few moments ago that artificial intelligence has advanced over the past few years, which is part of the reason why now is the right time for technology like this. What specific advancements have been made over the past year or so?

There are a few things. The first one is intelligence. Intelligence is based out of insight. In order to get to the insight, you need data. In the past, the industry as a whole didn’t have a good technology for accumulating the data and processing the data. Because of the advancements in that area, now we’re able to get closer to the insights that are relevant to use. That’s probably the most important thing.

The third one, and probably most important one, is the public’s understanding. At the end of the day, what we’re actually pushing towards is a change in behavior. You can’t really change your behavior if you’re used to it. I think a good example is when you update PowerPoint to the next version. The first thing you do is you literally bitch about it. You say this is shit, because you’re used to the old paradigm. But once you’re used to it, you now say it’s more convenient and better. That’s change in behavior.

Let’s talk about Bixby for a minute. Bixby seems to be a really important part of Samsung’s smart home strategy moving forward. At CES, we saw Bixby being integrated into TVs and refrigerators to answer questions and show information in various parts of the home. How does Samsung plan to make Bixby stand out from rivals like Amazon’s Alexa and the Google Assistant?

We actually have different roles. We ride on a different backbone. If you look at Alexa’s backbone, it’s heavily anchored to e-commerce, as well as other content like music. If you look at Google Assistant’s backbone, it’s riding heavily on their search engine. And we need those [types of] information in our lives, I think they’re serving that. If you look at Bixby, we’re serving how to use products more intelligently. That’s different than the Google Assistant and Alexa’s domain . . . People are getting confused because there are some overlaps between those products. But our heritage is really to serve the products better.

Would you say the smart home market is shaping up to be different than the smartphone space, in terms of how you view the competition? It sounds to me like you’re saying there’s room for Google, Amazon, and Samsung in the home.

It’s actually heading toward being more different. I wouldn’t even want to call them competing products. They’re products serving different domains versus products serving our domain. SmartThings was particularly crafted to observe those overlapping touch points.

When it comes to smartphones, Samsung has been criticized in the past for cramming too many features into one device. What have you learned from your experience in mobile devices that you’ve carried over to smart home devices?

We’ve learned a lot. And we’re going to get better at this. But there are contradicting points of view of the criticisms we get versus what people want. Do you think people really want fewer features? No. They want simplicity with a lot of features. That’s difficult. Simplicity and a lot of features are actually in a different domain. Just like my baseball analogy, what we’ve stumbled upon is trying to put that into one playground. And we thought it was simple enough, maybe from an engineer’s point of view, but not a consumer’s . . .

If you look at our Family Hub (Samsung’s smart refrigerator) in 2016, it was very minimal. We’re trying to do two things. One is making sure we add new relevant features and functions, and the second one is that the overall experience is a lot more pleasant. With those two strategies we’re hoping we can get to where we want to go. 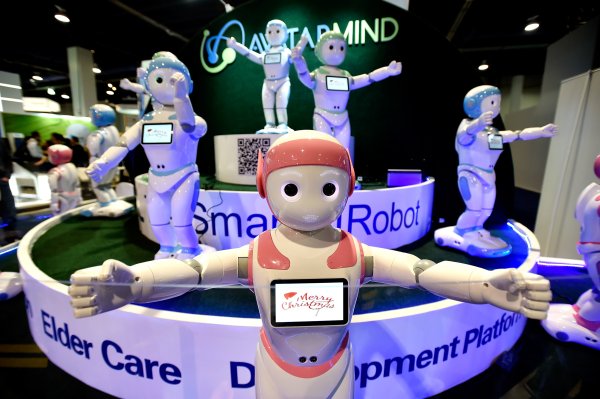 The 9 Absolute Weirdest Gadgets We Saw at CES This Year
Next Up: Editor's Pick