What Is a Government Shutdown? Here's What Happens Now

Lawmakers are scrambling and headlines are screaming Friday as the U.S. government heads towards a shutdown. But what does that actually mean?

Congress needs to pass a budget resolution by the end of Friday to fund the government. But the political parties can’t come to agreement on the bill, wrangling especially over whether to include immigration measures, like a fix for the Deferred Action for Childhood Arrivals (DACA) program, and whether to pass a short-term fix or come to a lasting budget agreement.

Democrats are blaming Republicans, who control the White House and both houses of Congress, for the mess; Republicans, who need cooperation from the other side to pass the funding bill with 60 votes, are blaming Democrats. (The House voted Thursday night to avoid the shutdown, but the bill now faces a murkier future in the Senate.)

Here’s what you need to know about government shutdowns.

What is a shutdown?

A government shutdown is when Congress doesn’t approve a federal budget for the upcoming fiscal year and nonessential functions of the U.S. government close until lawmakers can agree on a budget.

What happens when the government shuts down?

When the government shuts down, that doesn’t mean that all federal operations cease — just the ones deemed nonessential. Nonessential federal workers are furloughed, which means they are sent home and docked pay. (They can later be paid retroactively for this time off.) These jobs can include such things as working at national parks or monuments, processing passport and visa applications and maintaining government websites. During the last shutdown, 850,000 executive-branch employees were furloughed.

But many of the government’s primary duties will continue to be performed, although the workers may not be paid for it. Trump, for example, tweeted that a shutdown will be “devastating to our military,” but that’s not true. The military is considered essential so it would largely continue to function, though Congress would have to reapprove a bill from 2013 to have members of the military continue to receive paychecks during the shutdown.

Government offices related to national security law enforcement, air traffic control, U.S. mail and others all remain open. “All of these people will be working for nothing,” Mulvaney said. “Which is simply not fair.”

When has the government shut down before?

Will the government shut down this time?

Possibly. The House passed a short-term spending bill Thursday night, so now it’s up to the Senate. The Senate could vote on the bill the House passed, and if it passes again the shutdown would be averted. Right now, a key sticking point between Republicans and Democrats is whether to pass another continuing resolution for a short-term fix or come to a more difficult but longer-lasting budget compromise, and whether to include a DACA fix in the spending bill to protect undocumented immigrants brought to the U.S. as children. (Trump repealed DACA in September, and it runs out March 5.) The House bill ignores the immigration issue. 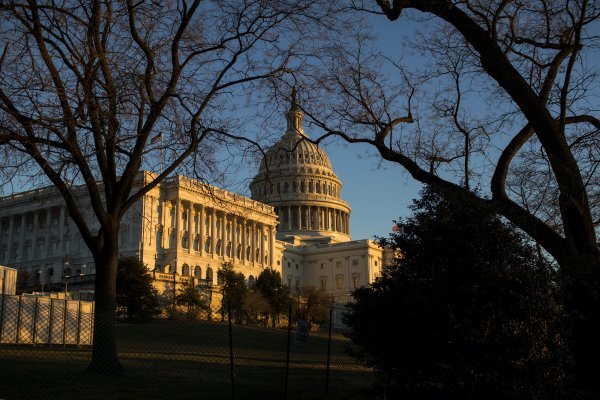 The Government Is Hours Away From Shutting Down. Who's to Blame?
Next Up: Editor's Pick