President Trump Is Against the Government Shutdown. But He Encouraged Them in the Past

President Donald Trump is arguing that a looming government shutdown would be “devastating,” but over the past five years he’s repeatedly praised shutdowns as a legislative tactic and even argued they are good for the country.

As part of a fight over how to handle immigration, a measure to keep the government open before a midnight deadline appears likely to fail Friday, leading to a shutdown starting this weekend.

Trump has blamed Democrats for the shutdown and argued it will be “devastating to our military,” though members of the military are largely exempt from shutdowns as they are considered essential services.

But that’s a much different argument than the ones he’s made in the past in support of Republican-led shutdowns under the Obama Administration.

In fact, when House Republicans sought to shut down the government in the fall of 2013 as a way to stop the implementation of the Affordable Care Act, Trump was a cheerleader for the effort.

As with the current shutdown fight, Trump was concerned in 2013 with the military, criticizing the Obama Administration for delays in money to the families of military personnel killed in action and barricades at the World War II Memorial, one of the national park sites that was closed during the shutdown.

But overall, Trump argued in 2013 that a shutdown was not a big deal because “all essential services continue,” linking to an Associated Press explainer on how shutdowns work, and claiming that it showed the federal government could get by with fewer employees.

After the shutdown began, Trump noted that the stock market had done well, arguing that closing the government might even be good for the economy. (There’s little evidence for this. In fact, Moody’s Analytics estimated the cost of the 2013 shutdown as $23 billion in lost economic output.)

Trump also encouraged Republicans to stay united during the shutdown, telling talk show host Larry King that if Republicans were unified they could win the shutdown fight and he harshly criticized those in the GOP who did not want to continue the fight.

“If the Republicans stuck together, which they absolutely not doing, they could actually win,” he said. “But they can’t win with half of them saying we shouldn’t be doing this.”

(He has a point. There is a lot of evidence that the party that controls the White House suffers the most during a shutdown.)

As a presidential candidate in 2015, Trump also backed a strategy proposed by Texas Sen. Ted Cruz to attach a rider defunding Planned Parenthood to a spending bill and force a shutdown, arguing that the strategy could have worked in 2013 if Republicans had stayed united.

“If they had stuck together they would have won that battle,” he told conservative radio host Hugh Hewitt. “I think you have to in this case also, yes.”

Trump backed the idea of a government shutdown even after he became president, arguing out of frustration with the Senate rules in May of 2017 that the country “needs a good ‘shutdown.'” 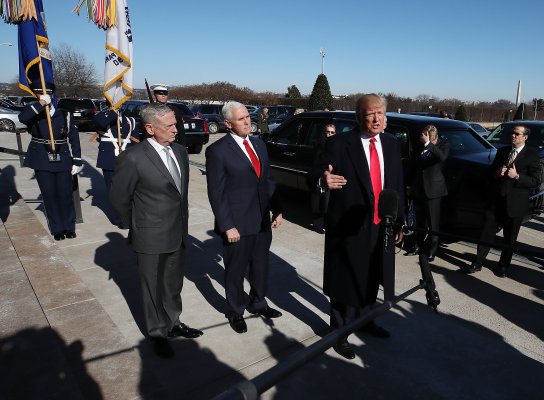 Trump Keeps Arguing a Shutdown Will 'Devastate' the Military. That's Not Exactly True
Next Up: Editor's Pick