The Flu May Be Spread Just By Breathing, Study Says

For years, you’ve been told to cover your mouth when you cough or sneeze, especially when you’re sick. But a new study finds that it may be possible to spread the flu just by breathing—no coughing or sneezing required.

“People shed a lot of virus all the time, even when they don’t cough,” says Donald Milton, author of the study published in PNAS and a professor of environmental health at the University of Maryland School of Public Health. “As a result, it’s important to realize you can be infectious at any time.”

During the 2012-2013 flu season, Milton and his colleagues studied 142 University of Maryland students with active influenza, attempting to track how and when they expelled virus particles. During a total of 218 30-minute observation sessions, the students sat in a machine that could measure the droplets they shed while breathing, talking, coughing or sneezing. While coughing did expel some flu particles, the researchers discovered that almost half of the aerosol particles collected in the absence of coughing also contained flu matter, suggesting that simply inhaling germ-ridden air could get you sick.

The researchers also found that men shed more flu virus per cough than women, but women coughed more frequently. People with a higher body mass index also tended to expel more viral particles than people with a smaller BMI, perhaps because higher BMIs have been linked to higher rates of inflammation and more frequent closing and reopening of small airways, Milton says.

All that said, Milton notes that the study did not track transmission, so it’s impossible to say for sure whether the exhaled droplets would have given someone the flu. In fact, the validity of airborne transmission is a controversial topic in the medical world. But Milton says the new study suggests that, “if that person next to you looks really sick, even if they’re not coughing, they can probably infect you.”

If future studies can prove that these tiny, airborne droplets can pass on the flu, those findings could potentially lead to changes in the way public spaces are built and ventilated, Milton says. (His team is currently studying how flu is transmitted in the freshman dorms at the University of Maryland.) Until then, though, he says the study should serve as a reminder to stay home from school or work when you come down with an illness.

“The take-home message is to stay away from other people when you’re sick with flu-like symptoms, even if you’re not coughing,” he says.

But what if your sick cubicle neighbor comes into the office anyway? Unfortunately, there’s more bad news for germaphobes: Milton says past research has shown that flu masks do little to stop the kind of fine particles measured in the study.

“There’s not much evidence that any of that works very well,” he says. “Surgical masks block mostly the large droplet spray, but the surgical masks don’t block the fine particle aerosols very well. The route of infection matters.” 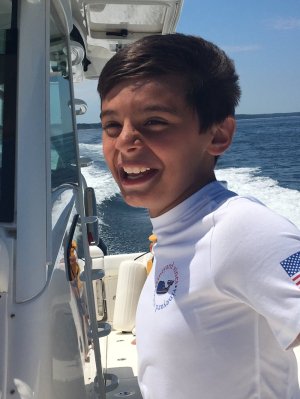 'It's Actually a Nightmare.' Mother Warns Others After 10-Year-Old Suddenly Dies From Flu
Next Up: Editor's Pick