Puppies Found Healthy in California House of Horrors Are Up for Adoption, Officials Say

Photo courtesy the City of Perris, California
By Melissa Chan

A pair of puppies belonging to the Perris, Calif. couple accused of torturing and starving their 13 children are up for adoption, city officials said.

The City of Perris said it is holding an adoption raffle, beginning Friday, to find a new home for two small dogs that authorities seized from David and Louise Turpin after the couple’s arrest this week.

The dogs — female Maltese-mixes, each about 1-year-old — appear healthy and friendly, Perris Senior Animal Control Officer Christina Avila said in a news release. Both are leash-trained and will be spayed and immunized before they’re given away on Feb. 5. Officials said they’re hoping both dogs are adopted together. Potential new owners must live within the city and undergo home inspections.

Authorities on Sunday found the couple’s 13 biological children malnourished and living in filth, after a 17-year-old girl escaped the house and alerted police. At least three of the children were shackled to furniture with chains and padlocks, authorities said. The victims’ ages range between 2 and 29. 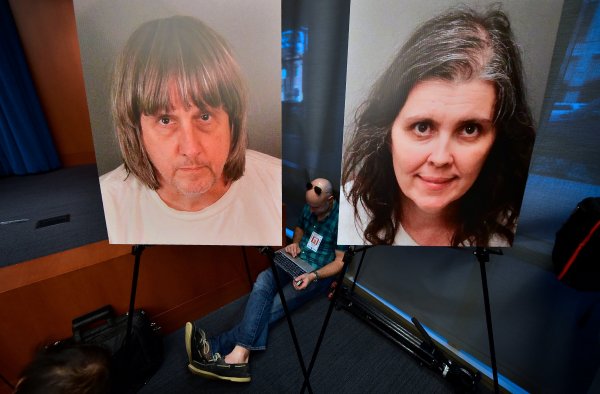 Allowed 1 Shower a Year and Fed Just Once a Day: New Allegations of Abuse in House of Horrors Case
Next Up: Editor's Pick