Allowed 1 Shower a Year and Fed Just Once a Day: New Allegations of Abuse in House of Horrors Case

The 13 siblings who were allegedly kept in captivity for years in their Perris, California, house often had no access to a bathroom, were not allowed to shower more than one time per year and received just one meal per day, prosecutors alleged on Thursday.

“This is severe, emotional and physical abuse, there is no way around that,” Riverside County District Attorney Mike Hestrin said when announcing the charges on Thursday. “This is depraved conduct.”

The couple was charged with 12 counts of torture, 12 counts of false imprisonment, seven counts of abuse of a dependent adult and six counts of child abuse, according to the AP. The father also faces a charge of lewd conduct on a child by force or fear. They pleaded not guilty in court on Thursday.

The victims, who range in age from 2 to 29 years old, told investigators they were frequently beaten and choked, and that they started being tied up as a form of punishment “many years ago,” Hestrin said during the news conference.

While the parents bought food, including pies, they would not let the children eat them, according to NBC News. Instead the children were allegedly fed just one meal a day, prosecutors said.

This deprivation led to most of the victims being severely malnourished, Hestrin said during the news conference. Only the 2-year-old appeared to be getting enough to eat. Some of the siblings also experienced cognitive and nerve damage as a result of their malnutrition, according to the AP.

Other abuse included allegedly depriving the children of basic information about the outside world, according to the AP. None of the 13 siblings had ever seen a dentist and none had seen a doctor in more than four years.

They also remained chained up, even to go to the bathroom, and were allegedly punished if they were discovered washing their hands above the wrist area, Hestrin said, according to the AP.

Other abuses involved allegedly showing the children toys but not allowing them to play with them. It seemed that writing was the only activity allowed, according to the AP, as authorities are now reading through hundreds of journals found in the home.

“We are at the beginning, not the end,” Hestrin said on Thursday according to the Press-Enterprise. 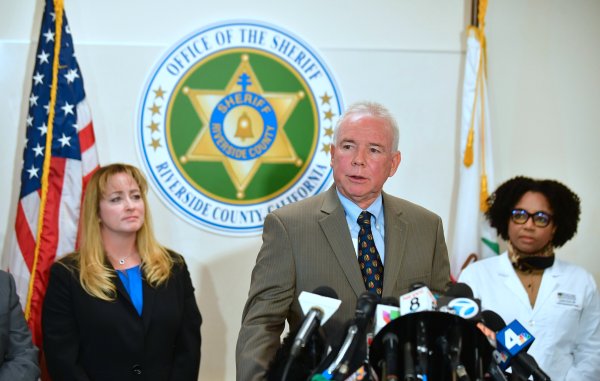 Adult Siblings Found Shackled in Home Look Like Young Children Due to Malnourishment, Hospital Says
Next Up: Editor's Pick