Immigration Debates Have Always Been Tied to America's Moments of Crisis

As Congress this week struggles to deal with the immigration program known as DACA in the face of a potential government shutdown, it faces the monumental task of reconciling utterly opposing views of the proper role and status of millions of immigrants now living in the United States. But, while this task is huge, it is not without precedent. In fact, the current debate is part of an ongoing pattern in American history.

Writing in the 1990s, William Strauss and Neil Howe showed that the nation’s history could be viewed through the lens of an 80-year cycle, each time punctuated by a great political crisis that created a new order: the American Revolution, the Civil War, and the Depression and Second World War. They also predicted, correctly as it turned out, that the nation would be in such a crisis by 2010 or 2015. (Steve Bannon was drawn to their view.)

Arguments about immigration have always been part of that cycle. The question of who belongs in the national community is a hot one when crises begin, and every great time of American turmoil has found new answers to the question of who gets to be an American.

The question now is how the U.S. can possibly find a solution to the current debate, as it has done in the past.

Even the era of the first such crisis—the American Revolution—saw conflicts over immigration. As early as 1751, an obscure Pennsylvania newspaper editor named Benjamin Franklin (!) railed against a flood of German immigrants: “Why should the Palatine Boors [Germans] be suffered to swarm into our Settlements, and by herding together establish their Language and Manners to the Exclusion of ours? Why should Pennsylvania, founded by the English, become a Colony of Aliens, who will shortly be so numerous as to Germanize us instead of our Anglifying them, and will never adopt our Language or Customs, any more than they can acquire our Complexion.” But when the revolution began, political conflicts moved ethnic ones off center stage, and the minority that was driven out of the colonies when the war was over were Tories—supporters of George III—not ethnic minorities.

The same holds true for the next great moment of crisis, around the Civil War. Slavery, of course, emerged as the nation’s leading political issue in the 1850s, but it was not the only one. Immigration, particularly from Ireland after the potato famine of the early 1840s and Germany after the failed revolutions of 1848, had taken off in the new nation, and it had provoked a backlash. Some Americans of British descent hated and feared the new immigrants, and they formed a whole new political party, the American or Know Nothing Party, to combat it. A list of its policy proposals that has survived in the Duke University library calls for the repeal of all naturalization laws, “more stringent and effective Emigration laws,” “war to the hilt on political Romanism”—that is, Catholicism—“eternal enmity to all those who attempt to carry out the principles of a foreign Church or State,” and “American Laws and American legislation and death to all foreign influences, whether in high places or low.”

The Know Nothings were strong enough actually to win many local elections and gain control of the state government of Massachusetts—a center of Irish immigration—in 1854. But the party, being anti-slavery as well as anti-immigrant, was largely absorbed into the Republican Party after 1856. For the new party, the spread of slavery, rather than the growth of immigration, was the main threat to free laborers in the North. What really solved the immigration crisis, however, was the war itself. Both Irish- and German-Americans fought in great numbers in the Union Army, and the war created a new national loyalty that largely transcended the old ethnic one.

By the early 20th century, millions of new immigrants were arriving from southern Europe—mainly Italy—and from Eastern Europe. As the New York Times recently noted, this led in 1924 to the passage of a very restrictive immigration act that brought this migration almost to a halt. That act, which remained in force for 41 years, restricted immigration drastically and set up quotas that reflected the percentages of various national groups within the population in 1890. This nativist reaction also helped lead to the resurgence of the Ku Klux Klan in the South and much of the Midwest, and made the 1920s a very bad decade in the history of race relations. It also largely closed the United States to refugees, just as Fascism came to power in Italy, and made it much more difficult for refugees from Nazism to reach the United States as well.

The act took the immigration debate off the table before the crisis of the Great Depression struck five years later, right on schedule, and practically speaking it would have been much more difficult for Roosevelt to implement his New Deal politics if new waves of immigrants were continuing to arrive in the U.S. But the real resolution came when the crisis continued with the Second World War, which promoted assimilation in the same way that the Civil War had 80 years earlier. Italian, Polish, Jewish and black Americans were drafted into the military along with others, fought and died, and emerged with the respect of most of their countrymen, an overriding national loyalty, and a new sense of citizenship. By 1965, the nation had granted full legal equality to black Americans and was feeling inclusive enough to let immigration barriers down again.

Like the 1840s-50s and the 1890s-1920s, the last few decades have combined massive new immigration with political polarization. Now the controversial immigrants come from Latin America, Asia and the Middle East, but the feelings they have aroused mirror those that have greeted newcomers from new lands in every era of American history.

The bipartisan U.S. political elite, including both Ronald Reagan (who signed a law giving legal status to millions of immigrants in 1986) and George W. Bush (who tried and failed to pass a similar one), has favored the new wave of immigration, which, like the others, has met very real demand for labor, and enriched America. Many voters, however, do not agree. Congress has repeatedly failed to pass laws that would allow those who have entered illegally to become citizens. That failure to act—one without precedent in earlier periods—has left us with more than ten million undocumented immigrants within American borders, a vulnerable population who lack the rights of citizens even as they play essential roles in the nation’s economy.

A solution parallel to those of past eras would involve all Americans in some great national task that would mobilize our manpower and resources and, when successfully accomplished, would leave us with a new sense of unity and citizenship. No huge foreign war seems likely to do so, but dealing with global warming could fill the bill, as could the rebuilding of our infrastructure and measures to solve our growing housing crisis.

Our political class, however, has failed to mobilize us behind any such task. That makes our immigration crisis a critical part of our attempt to make our constitutional order, once again, work as the founders intended. It will not simply go away. 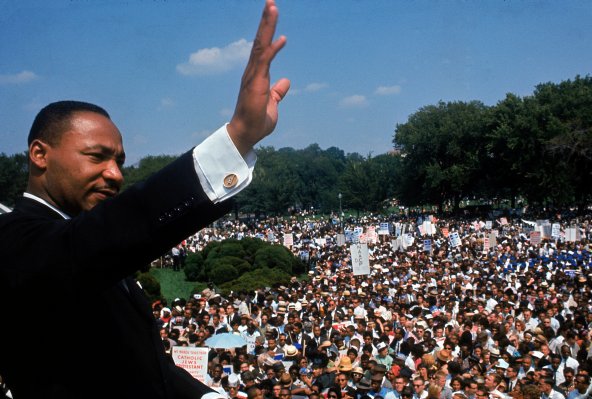 Don't Forget That Martin Luther King Jr. Was Once Denounced as an Extremist
Next Up: Editor's Pick