In a dimly lit ballroom inside the MGM casino in Las Vegas earlier this month, Nvidia CEO Jensen Huang was discussing a strange topic in front of a very eager crowd: Different species of flowers.

That may seem out of place to anyone familiar with Nvidia, a company best known for graphics processors that power everything from gaming computers to driverless cars. But Huang was illustrating how his company’s technology could use machine learning to identify and label more than 900 images of flowers in just a second.

It was a fitting way to kick off this year’s CES, the biggest tech show of the year. Many of the show’s announcements and exhibitions centered on artificial intelligence (AI) and its role in smart homes, smart cars, and smart everything. If previous CES events introduced “smart” gadgets to the world, this year’s show proved they’re here to stay.

Here’s a look at three ways AI will keep changing your life in 2018, if the gadgets and gizmos on display at this year’s CES is any indication.

Screens will be everywhere around you

We already spend a large chunk of our day staring at screens, whether it be on a smartphone, laptop, or TV. But tech firms are increasingly trying to integrate them into nearly every facet of life, from our home appliances to our cars.

Both Samsung and LG flaunted new refrigerators with built-in screens for showing information like shopping lists and the weather. Samsung’s new Family Hub fridge also works with the company’s voice-activated Bixby personal assistant, while LG’s InstaView ThinQ model integrates with Amazon’s Alexa. Refrigerators with touchscreens aren’t new: Samsung debuted an earlier version of the Family Hub in 2016. But their recurring presence at CES indicates that Samsung and LG — two of the world’s biggest home appliance makers — intend to continue with this approach.

Meanwhile, companies like Google, Lenovo, and Chinese search giant Baidu used CES to showcase new voice-centric computers with screens resembling tablets meant to be home appliances. Lenovo and Google jointly announced their new Smart Display, a voice-activated speaker powered by the Google Assistant. It’s like the Google Home, but the Smart Display includes a touchscreen. The hardware is also made by Lenovo rather than Google. Like the Amazon Echo Show and Echo Spot, the Lenovo Smart Display pulls up supplementary information on-screen while answering voice commands. When asking for restaurant recommendations, for example, the Smart Display will show nearby eateries on its screen, which users can tap into to learn more.

The home isn’t the only place you can expect to see more screens in the near future — they’ll become more prominent in your car and the office as well. Smart car startup Byton’s futuristic car concept, for example, not only includes facial recognition cameras but also a massive screen that wraps around nearly the entire front of the car’s interior. Mercedes also showcased its new infotainment interface, which it says uses AI to surface pertinent information (like directions to a favorite restaurant at dinner time) on a digital cockpit made of touchscreens. In the office, Samsung wants to replace traditional flipboards and whiteboards with a giant touchscreen computer, which it appropriately calls the Samsung Flip.

“Smart” devices will actually be smart

Tech companies have long promised that connecting home appliances to the Internet will make them easier and more convenient to use. But that vision has yet to fully come to fruition, in part because the smart home space is still split among different platforms operated by Apple, Google, and Samsung, among others. And while many of today’s smart appliances can be switched on or off via a number of cues, whether it be a voice command, the push of a smartphone button, or data about your phone’s location, they typically offer few other benefits. Samsung and LG say they intend to change this.

“For too many, the world of connected devices is still fragmented and complex,” HS Kim, president of Samsung’s consumer electronics division, said during the company’s keynote. “Each new device means a new setup experience, new passwords to remember, a new interface to learn, and a new way to manage and control it all.” Samsung announced at CES that it would be combining its Samsung Connect, Smart View, and Smart Home apps into one single platform launching this spring powered by SmartThings, the IoT company Samsung acquired in 2014.

LG, meanwhile, used its keynote as an opportunity to divulge details on how it’s incorporating artificial intelligence into home appliances. An LG washer running on the company’s ThinQ AI platform, for example, could observe frequently used laundry modes and other factors, like air quality or the weather, to optimize the machine’s settings.

Your car will know who you are

Companies like Apple and Google are already hoping to make your car’s entertainment system work more like a smartphone through their CarPlay and Android Auto platforms, respectively. But a handful of tech and auto firms are hoping to do more than just make it easier to use apps from behind the wheel. At CES, Nvidia, Byton, and auto supplier Gentex, among others, spoke about how biometric technology can be used to help future smart cars identify drivers and passengers, for instance.

Nvidia kicked off the conference by revealing its Drive IX platform, which could make it possible for car manufacturers to use facial recognition to check whether someone may be too drowsy to drive. The platform also makes it possible to track where the driver is looking in order to detect nearby objects that may be out of his or her line of sight. Volkswagen will be among the first car companies to work with Nvidia’s Drive IX software.

Byton, too, says that its concept smart car will include facial recognition to identify the driver. Gentex, similarly, was at CES promoting the newest version of its in-vehicle biometrics technology, which could identify a driver by scanning his or her irises. Doing so would prompt the car to start and automatically adjust settings like the seat position and favorite music stations.

While CES may once have been a stage for the world’s most dazzling technology demonstrations, this year’s event showed that it’s evolving into something different. It now serves as a status update for technology, auto, and home appliance companies to prove they’re getting closer to accomplishing the goals they’ve been promoting for years, however incremental those advancements may be. It may not have the razzmatazz of previous years, but it’s still offers a valuable look into the near future of the tech industry. 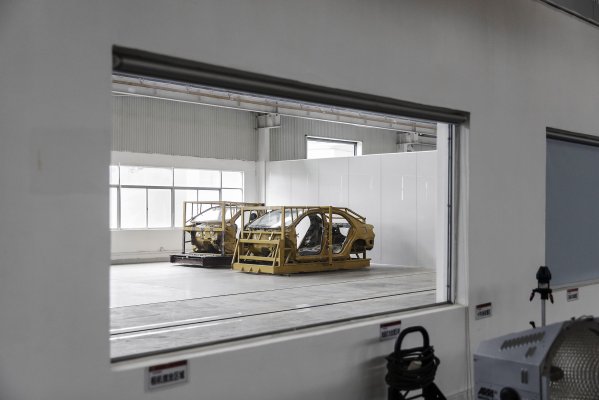 Why China Will Beat Tesla in the Electric Car Race
Next Up: Editor's Pick