Meghan Markle and her sidekick Prince Harry are in the midst of a number of public appearances following the announcement of their upcoming nuptials this spring.

This week, they made the journey to Cardiff, the capital city of Wales, where they toured the 2,000-year-old castle and stopped by local recreation center Star Hub, which promotes fitness activities for kids.

While hanging out with the kids, the former Suits actor partook in a classic game of Jenga. With the scene soundtracked by some upbeat pop, Markle seemed to be very much enjoying herself in the midst of the group. It’s not clear how the game turned out — we don’t see the tower fall — but at least early on she was at ease in the potentially-stressful situation.

Markle and the Prince also chatted with local high school students about fitness as they rode stationary bikes, and spent time greeting fans and receiving gifts outside the castle while on their Welsh jaunt. It wasn’t all fun and games during their journey to the English territory, though: they apparently got stuck on a delayed train for about an hour on their way there. Looks like things are going more smoothly on the ground, as onlookers who got a chance to meet Markle have only nice things to say. 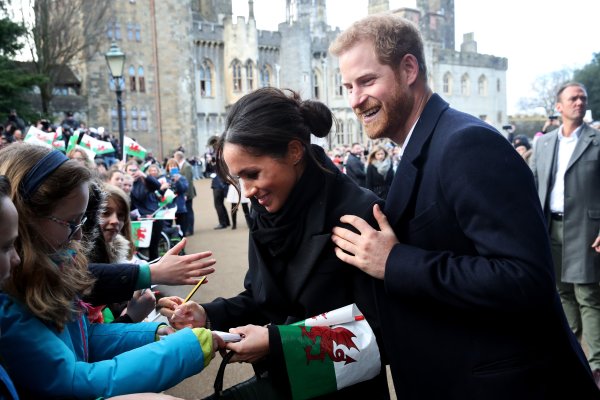