Its just four months until the world watches Meghan Markle and Prince Harry get hitched and gifts are starting to arrive.

This week, the royal family released their annual list cataloging all the presents they received, a required public disclosure. The royal family does not officially “own” such gifts nor do they pay tax on them. The newly engaged Markle scored an apron, according to The Telegraph. A member of the public gave Prince William the protective kitchen gear to give to Markle while the future king was in Finland last year.

An apron might strike some as old-fashioned, but Markle and her future husband are known to throw down in the kitchen. In fact, the pair were having a cozy night in roasting a chicken when Prince Harry surprised her by getting down on one knee to propose, they told the BBC. Markle scored her go-to recipe from Ina Garten, calling it a game-changer.

The duo went for a walkabout, signing autographs and shaking hands with well-wishers in Cardiff for their third royal appearance on Thursday. The royal wedding ceremony is set to take place May 19 at St. George’s Chapel at Windsor Castle, where Prince Charles married Camilla Parker Bowles in 2005. 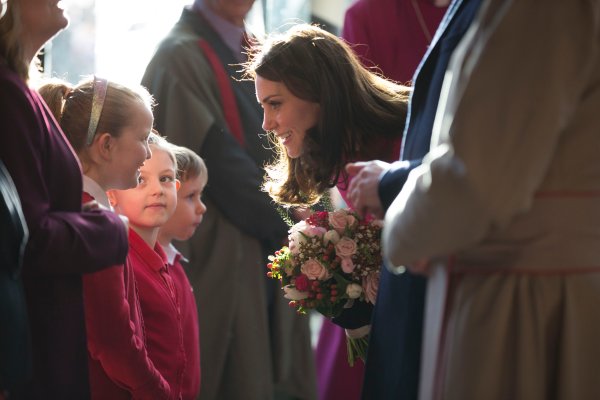 Kate Middleton Had the Sweetest Things to Say About Her Kids
Next Up: Editor's Pick