When Robin Li looks back at the question now, he can laugh. But things were different in 1992, when the Baidu CEO was a tongue-tied Chinese student applying for a computer-graphics graduate program in the U.S. The interviewing professor asked him, “Do you have computers in China?” It left the young man stunned. “I was very embarrassed,” says Li, 49, breaking into a grin from the penthouse office of his Beijing headquarters. “I thought, One day I’ll demonstrate that China has a really powerful computer industry.”

Eight years later, he did. In 2000, Li founded Baidu, a search engine that today is second only to Google in popularity, and whose 80% market share in China makes it the world’s fourth most popular website. The company, whose name derives from a 13th century Chinese poem, has grown into a $60 billion behemoth rivaled in China only by social-media-focused conglomerate Tencent and Jack Ma’s online shopping empire Alibaba. Baidu Maps directs every Chinese motorist, Baidu search results enlighten every student. Nobody is asking Robin Li if computers exist in China anymore.

In fact, what was once a land of cheap knockoffs now has Silicon Valley losing sleep. China has nurtured a third of the world’s 262 tech “unicorns,” or private $1 billion startups, according to a recent report by the global consulting firm McKinsey. Alibaba’s 2014 stock floating remains the biggest IPO in history, valued at $25 billion. China is the world’s largest e-commerce market, accounting for almost half of all global transactions by value, up from less than 1% just over a decade ago. Its big cities are verging on a cashless society, where even steamed buns or rickshaw rides can be purchased with a flash of a smartphone QR code. It’s a far cry from when former U.S. Vice President Joe Biden scoffed that the Middle Kingdom didn’t innovate.

China has now set its sights on the next tech frontier: artificial intelligence. On July 20, China’s State Council issued a Next Generation Artificial Intelligence Development Plan to become the “premier global AI innovation center” by 2030, when it predicts China’s core AI industry will be worth $148 billion, with AI-related fields at $1.48 trillion. China already rivals the world’s leading developed nations by spending 2.1% of its $11.2 trillion GDP on research and development. At November’s Artificial Intelligence and Global Security Summit in Washington, Eric Schmidt, then executive chairman of Google parent Alphabet, predicted China’s AI prowess will overtake the U.S. within a decade. “By 2030, they will dominate the industries of AI,” he said. Russian President Vladimir Putin recently said that whoever masters AI will become “ruler of the world.”

No one in China takes this challenge more seriously than Robin Li. Some $1.2 billion of his firm’s $9 billion revenue over the first three-quarters of 2017 was put back into R&D, according to published accounts–much of it into AI. He believes Baidu can dominate the global market for AI by harnessing China’s greatest advantage: scale. At a basic level, AI systems replicate human learning based on empirical data: whether driving patterns, financial behavior or the true intention behind a slurred voice command. The more data, the better trained the algorithm–giving a company that serves the world’s most populous nation an obvious leg up. “[China is] a very large and uniform market,” Li says. “Everyone speaks the same language; they all obey the same law.”

Therein lies the contradiction at the heart of China’s efforts to forge the future: the country has the world’s most severe restrictions on Internet freedom, according to advocacy group Freedom House. China employs a highly sophisticated censorship apparatus, dubbed the Great Firewall, to snuff out any content deemed critical or inappropriate. Google, Facebook and Twitter, as well as news portals like the New York Times, Bloomberg and TIME, are banned. Manned by an army of 2 million online censors, the Great Firewall gives outsiders the impression of deathly silence within.

But in fact, business thrives inside the firewall’s confines–on its guardians’ terms, of course–and the restrictions have not appeared to stymie progress. “It turns out you don’t need to know the truth of what happened in Tiananmen Square to develop a great smartphone app,” says Kaiser Kuo, formerly Baidu’s head of international communications and a co-host of Sinica, an authoritative podcast on China. “There is a deep hubris in the West about this.” The central government in Beijing has a fearsome capacity to get things done and is willing to back its policy priorities with hard cash. The benefits for companies willing or able to go along with its whims are clear. The question for Baidu–and for Li–is how far it is willing to go.

A trip in Baidu’s self-driving car is not yet a comfortable ride. When TIME took a test drive around the Baidu campus, potential obstacles like trash cans or parked cars caused the vehicle to regularly jolt to a halt. The car is far from road-ready: there’s a clumsy spinning radar on the roof and a trunk full of whirring gadgetry. Still, Baidu’s driverless-car platform, Apollo, has been adopted by 130 independent manufacturers, testament to what Baidu has achieved in the field. The company has launched voice-recognition software, DuerOS, which it says recognizes Mandarin Chinese more reliably than a human being does. Its AI-driven facial-recognition software is so advanced, it is being used to reunite missing children with their parents by digitally aging and matching photographs. On Jan. 8, Baidu was ready to unveil Apollo 2.0, which enables autonomous driving on simple urban roads, at the Consumer Electronics Show in Las Vegas. Baidu’s message at the event said it all: “AI is changing the world, at China speed.”

“Our vision is that humans can interact with all devices using human language,” says Li. “The difference between humans and animals is that humans can use tools. Over the past 100,000 years, whatever tools you invent you have to learn how to use. In the future, you won’t need to do that–tools will learn how to understand human language, human intentions. That’s the future.”

It’s a future that Li could hardly have imagined growing up in Yangquan, a city of about 1 million people in China’s hardscrabble central province of Shanxi, known for farming and mining. Li’s high school had only five Apple II computers for 1,800 pupils, so the teachers prioritized their usage for the dozen kids with the best math scores. Li enjoyed math but “immediately fell in love with computers,” he says. “I thought they were magical.”

After studying information management at Peking University, Li obtained a computer-science degree at the State University of New York at Buffalo. He initially worked for the Wall Street Journal as a software engineer, before joining search-engine pioneer Infoseek. Then Li made the decision to return to China to found his own company, in a hotel room opposite the Peking University campus. “I hired a professor and five students about to graduate to work on the first version of the Baidu search engine,” he says.

Baidu went from strength to strength, unperturbed even by the entry of Google to the Chinese market in 2005. Baidu had over 40% of Chinese search traffic at that time, compared with its rival’s 30%. By the time Google withdrew from China in 2010, citing what it believed was government hacking of Gmail, Baidu had 75% of Chinese search traffic, while Google had shrunk to just in the teens.

Li says the company used government meddling as an excuse. “Google left because Baidu was gaining market share,” he says. “The China market is very competitive and things can change very quickly, so you really need to make decisions very quickly, and the problem is that U.S. companies’ decisionmaking is not made here in China.” Lee Kai-Fu, head of Google in China at the time, says the decision to retreat was “difficult.” “You really have to make the decision to fork your product into two different products. That’s very painful–especially for Silicon Valley entrepreneurs.”

China’s 1.4 billion people are a tantalizing prospect for American business minds, but the obstacles are significant. Chief among them is compliance with local regulations, including censorship. Skype, for example, was removed from Chinese app stores in mid-November for failing to abide by new regulations. Last year, China rolled out a controversial new cybersecurity law that, among many stipulations, requires foreign companies doing business in the country to store related data locally. This means, say critics, courts beholden to the Communist Party can easily subpoena it. Even so, that hasn’t dissuaded every U.S. company; on Jan. 10, Apple agreed to outsource local iCloud services to a Chinese firm.

Baidu also plays by the government’s rules by, for example, censoring searches of the 1989 Tiananmen Square protests and deadly crackdown. Li is unapologetic. “If certain things are deemed illegal, then it’s illegal, and we should block it,” he says. “That’s our way of doing business here.” But lately even Baidu has fallen foul of Chinese officialdom. In 2015, the Chinese government hijacked Baidu Analytics JavaScript to inject malicious code into hosting platform GitHub, according to independent analysts, sparking an almighty public-relations ruckus. In May 2016, Chinese regulators limited the lucrative health care advertisements that Baidu could carry following the death of a student after undergoing experimental cancer treatment he found on the site. The treatment took place at a state hospital, and many felt Baidu was made a scapegoat for China’s broken health care system.

Then, on Aug. 11, China’s cyberspace administration said it was investigating Baidu–as well as fellow tech titans Tencent and Sina Weibo–for alleged cybersecurity violations relating to social-media posts on its platforms. Previously unfettered chat services like WhatsApp have also found themselves proscribed. Is Li worried that Chinese cyberspace is getting smaller? “As an Internet company, we always don’t want anything regulated so we can do things freely,” he says carefully. “But I also recognize that that’s not practical and not even good for the country.”

It’s unlikely that Li would have gotten to where he is today by challenging the Communist Party. For the moment at least, both are united in their goal of harnessing the potential of AI. But the technology brings awesome risks as well as rewards. Tesla boss Elon Musk says uncontrollable AI represents a “fundamental” threat to humanity, while renowned physicist Stephen Hawking fears it could “spell the end of the human race.”

Li disagrees, saying, “Humans will always have the capabilities to make the world a safe place. Think about nuclear weapons: they can kill a lot of people, they killed a lot of people, but we can actually control this type of weaponry. And the real function of nuclear weapons was to end the Second World War. They did not start the Third World War.”

Not yet, at least. But fears over AI are not all about a dystopian future. The technology is already automating tasks that provided incomes to people. Driverless technology will most quickly be adopted for long-distance haulage, potentially putting up to 16 million Chinese truckers out of work. For Li, the problem is unavoidable. “When technology changes the world, then a lot of jobs are lost,” he says, comparing it to the advent of the steam engine. “You cannot change that. What you can do is continue to innovate and create more new jobs for people.”

That will require the Chinese government to remain open to the world, he suggests, and not withdraw as the U.S. appears to have done under President Trump. The White House’s proposals to limit immigration “damage the innovation environment of the U.S.,” Li says, urging China to take a different tack. “We should create a better environment for foreigners to open up here, to innovate here, to set up companies.” But for that to happen, and for Baidu to truly dominate AI, Li may have to confront China’s own ideological tightening. For now, however, Li is focused on his mission: “to make the complex world simpler.” Or, perhaps, to pull down barriers faster than others can throw them up. 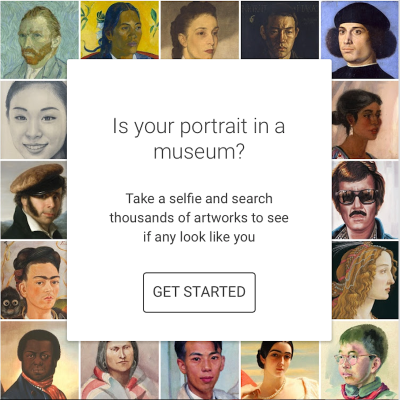 You Can’t Use Google’s New Selfie Art App in These States
Next Up: Editor's Pick