Troops were on patrol as protests and arson roiled Washington after the assassination of Martin Luther King Jr.
Darryl Heikes—Bettmann Archive/Getty Images
Ideas
By Jon Meacham
Meacham is the author of Destiny and Power: The American Odyssey of George Herbert Walker Bush

No one in the loop–including, almost surely, the man himself–was sure he would really do it. On March 31, 1968, Lyndon B. Johnson was scheduled to address the nation about the Vietnam War at 9 p.m. He had drafted a short section for the end of the speech announcing that he would not seek re-election in November. The President had talked about it with family and a few advisers, but the circle of trust was small after more than four years of tumult and war. As political a man who ever drew breath, Johnson kept his options open through the afternoon hours. At one point, the President stopped in his aide Marvin Watson’s office to talk about the race with Terry Sanford, the former North Carolina governor who had agreed to manage the 1968 campaign. “After spending all day at the White House,” recalled Johnson adviser John P. Roche, “Terry Sanford left for the airport still under the impression that he was the campaign manager.” Only a few hours later, on television, Johnson withdrew, solemnly drawling, “I shall not seek, and I will not accept, the nomination of my party for another term as your President.” Roche couldn’t believe it. “I had already put an LBJ ’68 bumper sticker on my car,” he said, “and I was wearing an LBJ ’68 button. We were left with 15,000 of the goddamn things.”

The watershed of 1968 was that kind of year: one of surprises and reversals, of blasted hopes and rising fears, of scuttled plans and unexpected new realities. We have embarked on the 50th anniversary of a year that stands with 1776, 1861 and 1941 as points in time when everything in American history changed. As with the Declaration of Independence, the firing on Fort Sumter and the attack on Pearl Harbor, the events of ’68 were intensely dramatic and lastingly consequential. From the assassination of Martin Luther King Jr. in April and of Robert F. Kennedy in June to the violence at the Democratic National Convention in August to the election of Richard Nixon in November, we live even now in the long shadow of the cascading crises of that year.

History shouldn’t be a cultural Zoloft, alleviating the pervasive depression of a time as dispiriting as our own in 2018. The past can, however, give us a sense of proportion–a framework in which to assess where our discontent ranks in terms of what has come before. And in that light, there’s an element of reassurance in looking back on 1968 from the perspective of half a century. A book by British journalists on America in 1968 was titled, aptly, An American Melodrama; the year was also, inescapably, a time of American tragedy. For all the unhappiness and madness of the present, for all the tribal conflicts of the Age of Trump, we are not–at this hour, anyway–engaged in a consuming war, and political violence is largely restricted to argumentative agitation. Tet, we should remember, was worse than any single tweet.

As 1968 began, the war in Vietnam was going badly and was about to get worse. More than half a million U.S. troops were there, and combat deaths occurred at a rate of about 46 U.S. troops a day, for a total of 16,899 that year. It was a terrible, tragic time. The promises of JFK’s New Frontier and LBJ’s Great Society seemed irretrievably lost in the humid jungles and sharp elephant grass of Southeast Asia. Johnson’s decision in March to stand down from re-election was the result of the apparent insuperability of the war. From the first phase of his presidency, in the wake of John F. Kennedy’s assassination in November 1963, Johnson had worried that Vietnam posed a tragic trap, and his worst anxieties had come true.

Four days after his March 31 speech, Johnson received word that King had been shot to death on a motel balcony in Memphis, where the civil rights leader was headquartered as he supported a strike of sanitation workers. King was not yet 40 years old. Thrust into history by the antisegregation Montgomery bus boycott in 1955, a movement set off by Rosa Parks’ refusal to surrender her seat to a white passenger, King had been crucial in the formation and promulgation of the civil rights crusade’s commitment to nonviolence. By framing the struggle against Jim Crow and for equal opportunity as a fulfillment of Thomas Jefferson’s promises in the Declaration, the African-American Southern Baptist minister had become, in the phrase of historian Taylor Branch, a “new founding father.”

A noble moment, but the fates were not yet satisfied. In April, Jacqueline Kennedy had shared her premonition of disaster. “Do you know what I think will happen to Bobby?” she asked Arthur Schlesinger Jr. “The same thing that happened to Jack … There is so much hatred in this country.” She was proved correct in June, when Robert F. Kennedy was gunned down in the Ambassador Hotel in Los Angeles after winning the California primary. Back in the ballroom, a woman screamed, “No, God, no. It’s happened again.”

The fear that the world was out of balance in a fundamental way helped Nixon, who had only narrowly lost to John F. Kennedy eight years earlier, prevail, also narrowly, in November against Hubert Humphrey. The dynamics of the ’68 campaign resonate still: Nixon–advised, among others, by Roger Ailes, who would go on to found Fox News–campaigned on a cultural populism, arguing that elites were undercutting American greatness and implying that minorities were too.

Even more relevant to our current politics was the presence, and ultimate performance, of a third-party candidate in 1968, George C. Wallace of Alabama. A cigar-chewing segregationist and populist, Wallace campaigned as a champion of the common white man. “You just watch him in the years ahead,” an Alabama political observer told Wallace biographer Marshall Frady in 1967. “He can use all the other issues–law and order, running your own schools, protecting property rights–and never mention race. But people will still know he’s tellin’ ’em, ‘A nigger’s trying to get your job, trying to move into your neighborhood.’ What Wallace is doing is talking to them in a kind of shorthand, a kind of code.” And it worked. In November, Wallace carried 13.5% of the popular vote nationally and won five states: Alabama, Louisiana, Georgia, Arkansas and Mississippi, giving him 46 electoral votes. It was not a bad starting point for a subsequent populist candidate who would tell voters that walls and tariffs would bring back the America they thought they had once known.

As battered and beleaguered as he felt, Johnson, that old New Dealer, never gave up hope. After his last speech, delivered in December 1972 at a civil rights conference at his presidential library–he would be dead within six weeks–he urged activists to fight on. “Let’s try to get our folks reasoning together and reasoning with the Congress, with the Cabinet!” the former President said. “Reason with the leadership and with the President! … And you don’t need to start off by saying he’s terrible–because he doesn’t think he’s terrible. Start talking about how you believe that he wants to do what’s right and how you believe this is right and you’ll be surprised how many men who want to do what’s right will try to help you.” Perhaps, half a century on, in our own troubled time, we can appropriate that benediction as the resonant lesson of a brutal age. 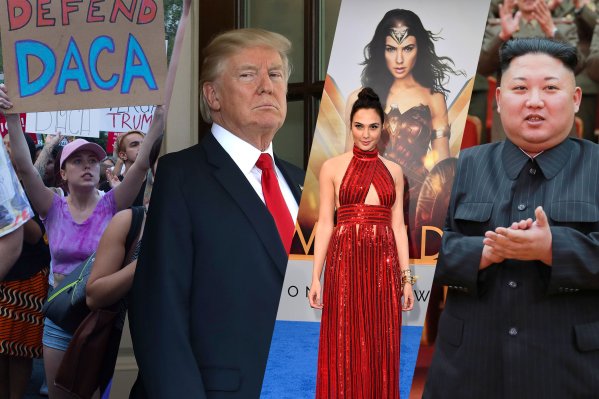 Re-live the News Roller Coaster That Was 2017 in 4 Minutes
Next Up: Editor's Pick