Death Cleaning to Hygge: These Books Want to Be the Next Marie Kondo

Illustrations by Tomi Um for TIME
Ideas
By Lucy Feldman
Feldman is a Senior Editor for TIME.

If you haven’t yet learned the definition of hygge, don’t sweat–the world will have moved on twice before you do. Thanks to concepts like hygge, lykke and lagom, bookstore browsing has become an exercise in translation, with more and more covers boasting foreign catchphrases as prescriptions for a new and happier lifestyle.

Following the outsize success of The Life-Changing Magic of Tidying Up, Japanese author Marie Kondo’s decluttering book that has sold 8 million copies worldwide, publishers are scouring the globe for similar hits. Drawing material from the Nordic countries, there’s a host of titles on hygge (the art of cozy living), lagom (the pursuit of balance) and now lykke (joy) as well as an end-of-life tidying manifesto on dostadning, or “death cleaning.” Publishers are chasing their tails for repeat Kondo performances in an industry that is rarely able to predict hits, but readers seem happy to buy in for now.

Kondo stirred an unexpected fervor with her pocket-size guide to the KonMari method, a way of unburdening your life by streamlining your possessions. Since the U.S. release in 2014, the professional organizer has followed up with two more, Spark Joy: An Illustrated Master Class on the Art of Organizing and Tidying Up and The Life-Changing Manga of Tidying Up. Hygge (sounds like “HOO-gah”), a concept from Denmark often described as “conscious coziness”–think candles, hot drinks and fluffy socks–arrived in stores next. Dozens of hygge books, from coffee-table tomes on dressing in warm knits to comfort-food cookbooks and fiction, written by Danes and non-Danes alike, have come out in the U.S. over the past two years. Many in the media have declared hygge the next KonMari. But wait. There’s also lagom (“LA-gom”) and dostadning (“DUH-sted-ning”), both from Sweden, and lykke (“LOO-kah”), another Danish contribution. Kondo’s own publisher, Ten Speed Press, has The Hygge Life: Embracing the Nordic Art of Coziness Through Recipes, Entertaining, Decorating, Simple Rituals, and Family Traditions and Live Lagom: Balanced Living, the Swedish Way.

“A really sticky concept from overseas can capture the imagination,” says Cassie Jones, an executive editor at HarperCollins who edits Meik Wiking, the Danish author of two such books. It can also spark dollar signs in the eyes of publishers. A colleague of Jones’ discovered a book on hygge that was taking off in the U.K. in the fall of 2016–Wiking’s The Little Book of Hygge: Danish Secrets to Happy Living–and acquired it for the U.S. company. The book didn’t seem unlike Kondo’s in its potential appeal, but that’s not a comparison an editor would openly make, Jones says–in the publishing world, it’s taboo to claim you’ve found the next fill-in-the-blank smash. But, she adds, “you could say, ‘We’re appealing to the same idea of being intrigued by how another culture solves a problem.'”

The Little Book of Hygge has risen to the top of the joyful-cozy book stack: it has been published in 33 territories and, since its January 2017 release, has sold about 95,000 copies in the U.S., according to NPD BookScan. HarperCollins happily acquired a second book from Wiking, The Little Book of Lykke: Secrets of the World’s Happiest People, which touts the Danish word for happiness but covers happiness practices worldwide. Published stateside in December, that book has sold only about 5,000 copies so far, according to NPD BookScan, but it has been released in 25 other territories.

Research on happiness has gained steam since the U.N. made it an official agenda item in 2011, and books on the pursuit, including Gretchen Rubin’s The Happiness Project, have a history of hits. Wiking is the founder and CEO of the Happiness Research Institute, a think tank in Copenhagen where suddenly pedestrians come knocking, expecting to find “rooms full of puppies.” (No such luck.)

Hygge books boomed because they capitalized on global curiosity about, if not envy of, the happiest country on earth, Wiking says, referring to Denmark. (It has consistently ranked in one of the top slots in the annual World Happiness Report since the survey was launched in 2012.) Wiking spoke to TIME as he rode his bike to his Copenhagen gym, having just finished 12 consecutive interviews with Canadian radio stations. Plus, hygge gave a name to a common guilty pleasure, along with permission to pursue it: couch potatoism. Go ahead, curl up under a pile of feathery blankets, sip hot cocoa and ignore the outside world. It’s hygge.

Wiking’s lykke book aims to strike at the heart of the same readership, stretching beyond Denmark for tips. Try shinrin-yoku, or “forest bathing,” a practice from Japan that includes mindfully experiencing the beauty of breathing cool, damp air, listening to leaves rustle and watching sunlight peek through treetops. Or follow the French health recommendation of eating meals in the company of others. “Denmark doesn’t have a monopoly on happiness,” Wiking says. But he’s quick to add, “More and more books will come out of Nordic countries in terms of explaining ways of life in that region. Those countries are doing something right.”

Indeed, we can thank neighboring Sweden for lagom and dostadning, and the guides therein. Lagom roughly translates to the Goldilocks rule: “not too little, not too much,” or balance in all things. Niki Brantmark, a British interior-design blogger who has lived in Sweden for 13 years, sat down to write about the concept last January. Her book Lagom: The Swedish Art of Living a Balanced, Happy Life was published in the U.K. in September. “Scandinavia is quite a hot topic at the moment,” says Brantmark, who admits a connection between the home-decoration aspects of lagom–fill your space with just the things you need and enjoy, and nothing more–and KonMari. Lagom seemed poised to dethrone hygge, but it didn’t quite pluck the same heartstring in the U.S. While compatible with U.S. culture when defined as “working out a lagom amount, wearing clothes of a lagom fit,” as Brantmark does, lagom also extends to personal status. Standing out is anathema in Sweden; excess is as American as it gets.

And then there’s dostadning. A new book this January, The Gentle Art of Swedish Death Cleaning, by artist Margareta Magnusson, unpacks the term, which is a somewhat less violent act than it sounds. To death-clean, a process that the writer “somewhere between 80 and 100 years old” is currently undertaking herself, is to prepare for the end of one’s life by ridding oneself of unneeded possessions–a merciful act for your next of kin if you’re old, and a satisfying personal experience no matter your age or stage of life. It bears some resemblance to KonMari. While some authors resist comparison–Brantmark was sent a copy of Wiking’s hygge book but says it’s quite different–Kondo acknowledges a symbiosis with death cleaning, and with hygge, lykke and lagom. “Each of those concepts encourages people to re-examine what matters in life and begin a way of life that is truly satisfying,” she says.

Jones, Wiking’s editor, saw firsthand the potential for real impact when a friend of hers became one of the first certified KonMari consultants in the U.S., officially sanctioned to go to New York City apartments to help people tidy their space. She’s not in the market for books with “happiness” in the title, she says, but there’s still room to play with more foreign concepts. Wiking hasn’t yet committed to another book, but he’s not ruling it out. “The Fins, they have a word for sitting at home in your underwear drinking by yourself. It’s one word, I can’t remember it,” he says. “But whether that will make a good book, I’m not sure.” (Attention writers: It’s kalsarikannit.)

In the meantime, readers less interested in mastering new vocabulary words can pick up a December release, The French Art of Not Giving a Sh*t. 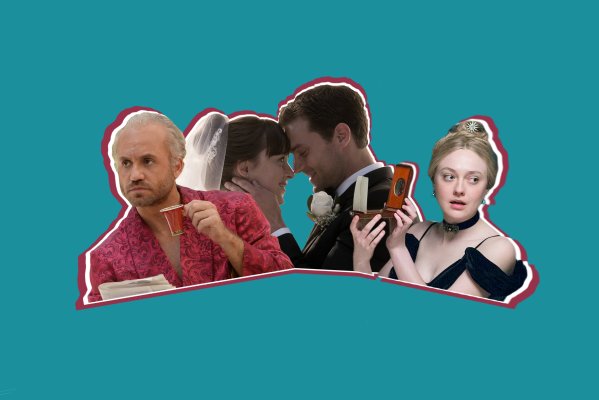 26 Books That Are Being Made Into Movies and TV Shows in 2018
Next Up: Editor's Pick