Repeated Hits to the Head — Not Concussions — May Cause CTE

When a football player stumbles off the field, woozy, there’s a good chance the player suffered a concussion. Often, medical professionals will converge on him, offering an assessment as to whether he can safely return to the game. These procedures are wise: Concussions are dangerous, and a brain should never be put at further risk.

But concussive episodes alone may not be responsible for the potential long-term damage to a football player’s brain. New studies from Boston University in humans and mice suggest that repeated head injury can trigger the onset of chronic traumatic encephalopathy (CTE) — a neurodegenerative disease associated with head trauma — independent of concussion.

The research, published in the journal Brain, analyzed the brains of both humans and mice to reach its conclusions. Researchers conducted postmortem brain examinations of four male teenage athletes — with an average age of 17 — who died after suffering sport-related head injuries. The athletes died 1, 2, 10 and 128 days, respectively, after sustaining their injuries. Each had played football; each athlete also had a history of concussions.

One of the athletes was diagnosed with early-stage CTE. In two of the other cases, abnormal levels of tau protein — which can kill brain cells and is a marker of CTE — accumulated inside their brains. A control group of four athletes of similar ages, but without recent head injuries, did not show any signs of CTE. “These results were surprising and alarming,” says Dr. Lee Goldstein, lead author of the study and associate professor at Boston University School of Medicine and College of Engineering.”They show that CTE is relevant to even teenagers, and that the onset of CTE can occur soon after injury.”

To determine a cause of CTE, the researchers conducted an experiment on mice. They administered a few mild blows to the heads of the lab mice: the force was equivalent to the impact of a right hook to a human, or a helmet-to-helmet football collision, but the blows did not always cause concussions in the mice, says Goldstein. The head impacts consistently triggered in mice markers of CTE, like leaky blood vessels, changes in electric functions and the buildup of tau proteins. There was no correlation between the presence or severity of concussion and CTE pathology. “Head impacts can trigger CTE with no concussion at all,” says Goldstein. “Concussions cannot be the cause of CTE.”

Such an experiment is impossible to replicate in humans, but some researchers believe that repetitive head trauma in a sport like football may be contributing to CTE. “The focus on concussion is not based in valid science or clinical research,” says Goldstein. “This is the first experimental evidence to solidly say that it’s the hits, not concussions, that count for CTE.”

Goldstein supports a proposal from his colleague, Boston University neurosurgeon Dr. Robert Cantu, who has long advocated that kids under 14 refrain from playing tackle football. In an ideal world, tackle football would be pushed back until later in adolescence, Goldstein says — your brain continues to develop into your twenties — but he knows such restrictions are unrealistic, given how deeply high school and college football is ingrained in American culture.

“We prohibit children from engaging in dangerous behaviors, like driving and drinking,” says Goldstein. “Maybe we need to think about whether or not we want to expose our own kids to something that can be inducing lifelong harm, and accelerating a neurodegenerative disease.” 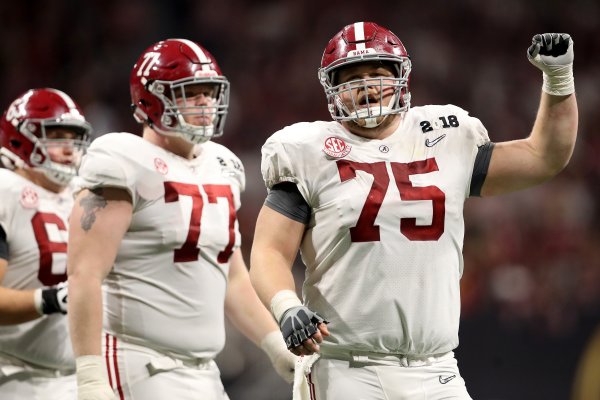 An Alabama Player Proposed To His Girlfriend After His Team's Stunning Comeback
Next Up: Editor's Pick