France Pulls Out of Event to Mark Rwanda Genocide

Rwandan President Paul Kagame looks on at his office in Kigali, Rwanda, on April 6, 2014
Evan Schneider—UN/Getty Images
By Sam Frizell

The French government has withdrawn from Monday’s 20th-anniversary commemorations for the genocide in Rwanda, after the country’s President accused France of participating in the 1994 mass killings.

French Justice Minister Christiane Taubira canceled plans to attend the events in Kigali on Monday following Rwandan President Paul Kagame’s denunciation of the “direct role of Belgium and France in the political preparation for the genocide,” the BBC reports.

President Kagame’s remarks were made to the French-language weekly newsmagazine Jeune Afrique in an interview on March 27. The French Foreign Ministry said Kagame’s remarks hurt the reconciliation process between France and Rwanda.

More than 800,000 people were killed in Rwanda — mostly ethnic Tutsi, but also moderate Hutus — after the death of President Juvénal Habyarimana, an ethnic Hutu, on April 6, 1994. The violence only ended after Kagame’s Tutsi-led group defeated government forces in July 1994.

Kagame’s faction, which has held the government since, has long blamed France for aiding the genocide. France was an ally of Habyarimana’s government, and a Rwandan commission found France helped train ethnic Hutu militias, who prepared in the mass killings, and was aware of preparations for the genocide.

France has acknowledged serious errors it made during the genocide, but has said its forces protected civilians during the violence. 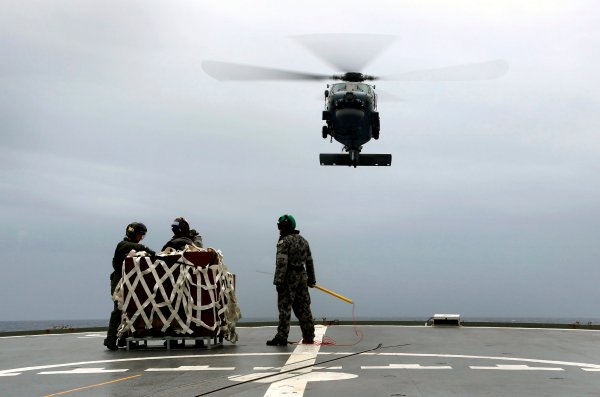 Jet-Search Team Finds a Pulse
Next Up: Editor's Pick