The first year of Donald Trump’s presidency has been a disaster, policy-wise, for American women.

Donald Trump and the Republican Congress wasted no time going after the Affordable Care Act — and even though they failed at their attempt to repeal it, they still managed to gut key provisions of the law, practically dismantling the requirement to provide women with access to cost-free birth control and doing away with the individual mandate.

The Trump Administration also paused an Obama-era equal pay rule and dealt a devastating blow to American women and their families when President Trump signed the Republicans’ tax bill — which effectively does nothing but further line the pockets of billionaires at the expense of working families — into law.

And in the year of the #MeToo movement, and Time’s Up, Donald Trump’s presidency means the White House is occupied by a man who’s been accused of sexual misconduct by at least 18 women without ever being held accountable.

And now, 2018 is already being called, “The Year of the Woman,” with women — as candidates and voters — poised to transform our politics. Since the 2016 election, more than 26,000 women have signed up at EMILY’s List for more information on running for office up and down the ticket. Many of these women will start by running for office in their communities, at the state and local levels. Together, they represent an entire future generation of women leaders.

Last year we already saw many historic “firsts” for American women in politics, and it all began building in early 2017 with the historic Women’s March around the world the day after Trump was inaugurated. We then saw the first African American woman elected as mayor of Charlotte, North Carolina; we elected the first Latinas, Asian American women and transgender woman to the Virginia state legislature; and we elected the first African-American lieutenant governor of New Jersey to name a few.

In the Alabama Senate election, African-American women voters made history, showing up in huge numbers to decide the election for Senator Doug Jones.

In 2018, we’ll carry this momentum through to the ballot box once again, where women candidates and voters will be the key to enacting policies that benefit, instead of hurt, women. Like in Virginia, women will drive significant progress in taking back state legislatures. And a record number of women gubernatorial candidates will be on the ballot.

As the president of EMILY’s List, I’m often asked what we’ll do and who we’ll endorse the first time we see more than one woman running for president at the same time. My answer is always that, first, we’ll celebrate — because that will be a good problem to have. And hopefully one we’ll have in every presidential election going forward. This is, after all, the entire point of the work that we do. Getting to the point where it’s normal to see multiple women running for office in every race, and at every level, is our end goal. It’s also the key to putting forth and maintaining laws that promote equality. This is why we fight so hard for these “firsts” at EMILY’s List. And it’s also why EMILY’s List has never stopped fighting since we were founded to elect the first Democratic woman to the Senate in her own right: The point of electing the “first” woman to any office is always so we can elect the second, and the third and the fourth — until we’re so used to seeing a woman in a particular role that there’s nothing new or out of the ordinary about it anymore.

And this is why I believe the story history will tell about the first year of Donald Trump won’t be defined by his policies as much as by the women who’ve stood up to fight back against them.

Right now, the transformation that’s starting in this “Year of the Woman” feels historic and exciting and new. But the best thing about it is that someday, this will be our new normal. 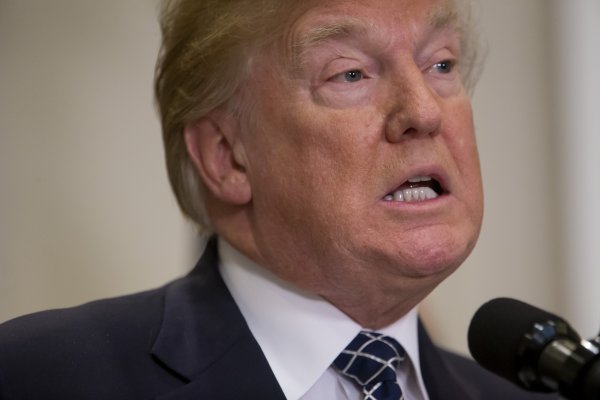 U.S. Ambassador to Panama Quits, Saying He Can't Do His Job Under President Trump
Next Up: Editor's Pick