Broken staircases, improper food storage and inadequate smoke detectors — President Donald Trump’s Mar-a-Lago Resort in Palm Beach was cited for maintenance violations which could have posed a threat to public health, safety and welfare, according to a recent inspection of the 1920s beachfront property.

The bed and breakfast part of the resort required emergency repairs to pass its most recent inspection in November, according to state records reported by the Miami Herald. The B&B was cited for two high priority violations “which could pose a direct or significant threat” to the public, according to the inspection code. Those included the absence of smoke detectors capable of alerting hearing impaired guests through flashing lights, and chunks of missing concrete exposing steel rebar on a staircase.

Meanwhile, the exclusive club’s kitchens were cited for 15 violations. The two main kitchens were written up for improper food storage, including milk that was stored at the wrong temperature and hot dogs stored on the ground floor of the freezer, according to the records. The kitchens passed the inspection, however, and did not need to be rechecked.

This isn’t the first time Mar-a-Lago’s catering services have prompted sanitation concerns. In February 2017, just days before the arrival of Japanese Prime Minister Shinzo Abe, inspectors found sushi fish that had not been subject to necessary treatment for parasites, and cited the club for storing food in two defunct coolers which reportedly reached temperatures that could spoil fresh food.

Trump, who bought the 20-acre estate in 1985, spent his Thanksgiving vacation at the club, a week after the inspection. The President also spent Christmas and New Year at the resort, which takes a $200,000 membership fee. 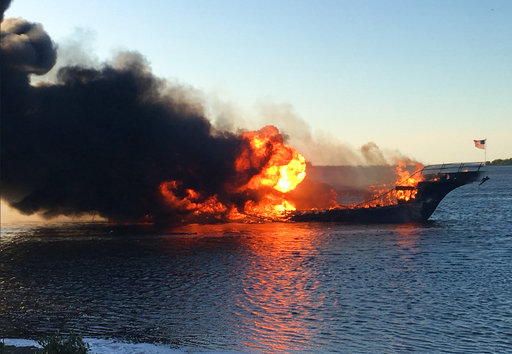 1 Woman Dead After Casino Boat Catches Fire Off Florida
Next Up: Editor's Pick