The Real Meaning of the Separation of Church and State

Ideas
By James Lankford, Russell Moore
Lankford is a U.S. Senator from Oklahoma; Dr. Moore is the President of the Southern Baptist Convention Ethics and Religious Liberty Commission.

We are told that one should avoid discussing two things at the dinner table: religion and politics. Clearly they have never eaten at our dinner tables. Religion and politics can be polarizing, precisely because they deal with important matters that are deeply personal and close to our passions. But these discussions do not have to be polarizing or combative. Intolerance of another person’s faith is a personal choice, not a legal requirement.

We are also told that we “should not mix religion and politics.” Again, this saying has a powerful truth: that when religion is used for political purposes, it empties religion of its eternal meaning and becomes just one more cynical method of acquiring power.

But there is also a disclaimer hidden in that phrase: that sometimes when people say “Don’t mix religion and politics,” they actually mean “Don’t bring your faith into the public square where I can see it.” In other words, hide your faith outside of your place of worship because we have a “separation of church and state.” Separation of church and state is too important a concept to be misused — especially not as a tool for silencing opposing views. As a matter of fact, on National Religious Freedom Day, it just might be as important as ever to consider the true meaning of church/state separation and religious freedom.

Congress’s 1992 resolution that made Jan. 16 as Religious Freedom Day — a designation reaffirmed by every President since — was based on the anniversary of the 1786 passage of the Virginia Statute for Religious Freedom, originally authored by Thomas Jefferson. This act inspired and shaped the guarantees of religious liberty eventually found in the First Amendment.

The text of the 1786 Virginia Statute for Religious Freedom gives great insight into our nation’s First Amendment right. It reads: “… no man shall be compelled to frequent or support any religious worship, place, or ministry whatsoever, nor shall be enforced … in his body or goods, nor shall otherwise suffer on account of his religious opinions or belief; but that all men shall be free to profess, and by argument to maintain, their opinion in matters of religion, and that the same shall in no wise diminish, enlarge, or affect their civil capacities.”

In short, the act affirmed what we should recognize in every era: the right to practice any faith, or to have no faith, is a foundational freedom for all Americans. This right is also behind what Jefferson meant when he spoke of a “wall of separation” between the church and the state.

Jefferson’s famous phrase came in an 1802 letter to the Danbury Baptist Association in Connecticut. The Baptists were worried about the freedom to practice their faith, writing to Jefferson that “what religious privileges we enjoy, we enjoy as favors granted, and not as inalienable rights,” which is “inconsistent with the rights of freemen.”

Jefferson wrote back that religious liberty, free from state tampering, would be a key part of the American vision. The Constitution, he wrote, would “restore to man all his natural rights.” In this same letter, Jefferson explained the intent of the Establishment Clause and Free Exercise Clause of the First Amendment to the Constitution, which reads: “Congress shall make no law respecting an establishment of religion, or prohibiting the free exercise thereof…” This, he said, built a “wall of separation of church and state.”

In its day, a constitutional prohibition that the state would not establish or restrain personal faith was truly revolutionary. Sadly, in many countries today, religious freedom is still revolutionary. America has the obligation to live this truth and demonstrate the depth of this powerful human right.

Thankfully, the Courts have affirmed this time and time again.

In 2014, the Supreme Court held in Town of Greece v. Galloway that “it is an elemental First Amendment principle that government may not coerce its citizens to support or participate in any religion or its exercise.”

In the recent Trinity Lutheran case, the Court held “that denying a generally available benefit solely on account of religious identity imposes a penalty on the free exercise of religion… The exclusion of Trinity Lutheran from a public benefit for which it is otherwise qualified, solely because it is a church, is odious to our Constitution all the same, and cannot stand.”

These cases not only explain the religion clauses of the First Amendment, but they also affirm the separation of church and state. In Town of Greece, the Court was clear that the government cannot coerce someone to participate in a particular religion, but it also should not attempt to restrict all acts of faith from the public square. The concept of a “separation of church and state” reinforces the legal right of a free people to freely live their faith, even in public; without fear of government coercion. Free exercise means you may have a faith and you may live it.

Before he died, Thomas Jefferson left instructions that in his grave’s epitaph, he wished to be remembered for three things — one of them being the Virginia Statute of Religious Freedom. On Religious Freedom Day, we should do just that, look back with gratitude for a nation that guarantees a free church in a free state. Separation of church and state doesn’t shut down our debates over religion in the public square; it guarantees the freedom for us to respectfully have those debates. Faith is worth talking about in many places in American culture and, yes, maybe even at the dinner table.

The original version of this story misstated the year in which Thomas Jefferson wrote a letter to the Danbury Baptist Association in Connecticut. It was 1802, not 1801. 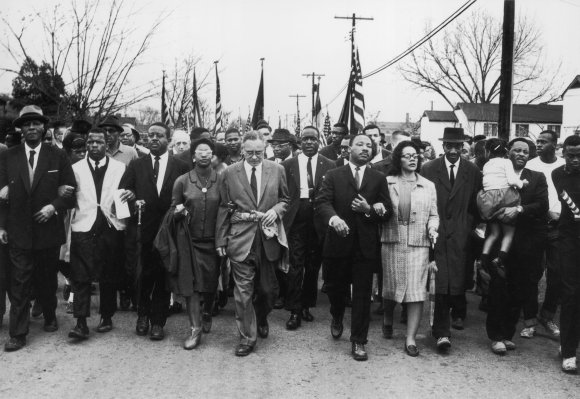 CAIR Exec: What American Muslims Can Do Today With Dr. King’s Lessons
Next Up: Editor's Pick