We are ready to go back to the future: The second season of The Handmaid’s Tale — which has scooped up just about every major award for its haunting and harrowing adaptation of the classic Margaret Atwood novel — will premiere April 25. And you can get a first look at what’s in store for us above. (Who knew a Buffalo Springfield cover could be so dang creepy?)

Ahead of Sunday’s Television Critics Association panel, it was revealed that the 13-episode season will be focused and shaped by the pregnancy of Offred (Elisabeth Moss) and her struggle to find her daughter inside the nightmare that is Gilead. Returning players in addition to Moss include Joseph Fiennes, Yvonne, Strahovski, Samira Wiley, Alexis Bledel, Ann Dowd, and Max Minghella.

At Sunday’s panel, more details were revealed, including that Marisa Tomei will guest star as a commander’s wife in the second episode, which will take place in the Colonies, signaling an expansion from the original novel’s world. “I certainly don’t think we’re going beyond the story that [Margaret Atwood] was telling,” executive producer Bruce Miller said. “She’s very much the mother of the series.”

Speaking of mothers, star and producer Moss reiterated that this season is all about motherhood. “It’s a wonderful thing to have a baby, but [Offred] is having it potentially in this world that she may not want to bring it into,” Moss said, adding, “I get bigger and bigger as the show goes on.”

When asked whether any real-life events make them want to change anything on the show, Miller said, “We have a few more months to go before we premiere, and certainly things can catch up to us. We’ve already had things where we thought about, shot them, put them in episodes, and then almost exactly the same images are on television. But I don’t think it’s a reason to jump in and start changing stuff.”

As for the tone on the series, Miller said, “There’s a lot of horror and cruelty and dread in this situation, but there’s also a lot of absurdity. I feel like June is always this close to turning to the camera and being, like, ‘What the actual f—.’”

Season 2 will kick off with two new episodes on the 25th and then will follow with new ones every Wednesday on Hulu. Moss said she thinks the second season will be even darker than the first, and when EW spoke to Miller earlier this month, he had one suggestion for how to prepare for viewings: “a bottle of scotch.” 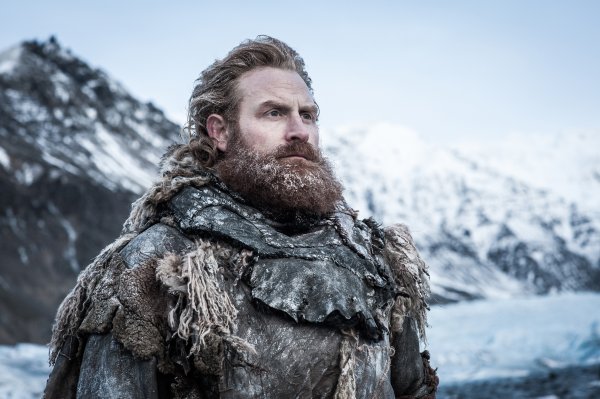 Here's When HBO Says You Can Expect Those Game of Thrones Prequels to Air
Next Up: Editor's Pick