How the U.S. and Canada's Women's Ice Hockey Teams Formed One of the Biggest Rivalries in Sports

Meghan Agosta-Marciano #2 of Canada celebrates scoring a goal in the third period against Jessie Vetter #31 of the United States during the Women's Ice Hockey Preliminary Round Group A game on day five of the Sochi 2014 Winter Olympics at Shayba Arena on February 12, 2014 in Sochi, Russia.
Pool—Getty Images
By Jennifer Calfas

Nearly every world championship in women’s ice hockey has been fought over by two teams: the United States and Canada.

The powerhouse ice hockey teams have traded world titles and Olympic medals since the 1990s, typically with Team USA coming out on top in the International Ice Hockey Federation (IIHF) women’s world championship and Team Canada securing gold at the Olympics, where the sport debuted in 1998.

The women’s storied rivalry has taken ice hockey’s center stage at this year’s Olympics as they battle over the biggest title in their sport. The two teams will once again meet in the gold-medal round following a preliminary match-up that Canada won 2-1.

“It’s one of the best rivalries in women’s sports or in sports in general,” said Brianna Decker, a Team USA forward who will compete at her second Olympic games in PyeongChang. “We cherish the opportunity to play them.”

The IIHF women’s World Championship began in 1990, when Canada beat the U.S. 5-2 win in the final round. Canada continued its dominance over the U.S. with each IIHF world championship until 2005, when the U.S. won 1-0 to earn the title. That win came several years after the U.S. secured the first-ever women’s ice hockey gold medal at the 1998 Winter Olympics in Nagano, Japan, where women’s ice hockey debuted as an Olympic sport.

But Canada has dominated the Olympics with gold medal wins in each Olympic showdown since — most of which were won in the final round against Team USA, save for a Canada-Sweden showdown in 2006. That year, the U.S. won bronze.

Heading into PyeongChang, Team USA is still reeling from a dramatic loss in the final round of the 2014 Sochi Olympic games, where Canada secured a 3-2 win in overtime. “It’s something that stings and something you don’t forget,” Decker said of the loss in Sochi.

Alex Carpenter #25 of United States shoots and scores against Shannon Szabados #1 of Canada in the third period during the Ice Hockey Women's Gold Medal Game on day 13 of the Sochi 2014 Winter Olympics at Bolshoy Ice Dome on February 20, 2014 in Sochi, Russia.
Martin Rose—Getty Images

Though the U.S. has recovered with world championship wins against Canada (with the most recent in 2017), no gold is quite as sweet as that from Olympics, Decker says. She said the U.S. has upped its mental toughness in preparation for PyeongChang as they aim to earn their first Olympic gold in 20 years. The team now does mental visualizations of upcoming games and what their opponents may bring to the ice to better prepare themselves.

The rivalry is particularly unique due to the dominance each team has had on the ice. That differs for men’s ice hockey, where the Olympic gold has gone to Canada, the U.S., Sweden, the Soviet Union and the Czech Republic. The same goes for the men’s IIHF hockey championships in recent years, with Sweden, Canada, Russia and Finland, among others, coming out on top.

A number of the women’s players from Team USA and Team Canada played with or against each other in college — turning former teammates into arch rivals.

“For us, when we’re on the ice, it’s all business,” said Haley Irwin, a forward on Canada’s team and two-time Olympic gold medal winner. “It’s game time. There are no friends on the ice when you’re playing a hockey team.”

“When you have Canada and USA, it’s just game time,” she added.

The rivalry has taken shape in a variety of ways on and off the ice. At two different matches just months before the Olympics in Sochi, Team USA and Team Canada broke out in fights on the ice, where fists flew and players shoved each other as referees tried to pull them apart. “We had a similar scrap in 2010, so I guess we have one every Olympic cycle to get it out of our system,” said Hayley Wickenheiser, a five-time Canadian Olympian who won’t be competing in PyeongChang. (A similar brawl has not broken out on the ice between the two team during this Olympic cycle yet.)

As for off the ice, U.S. forward Amanda Kessel said in an interview last year her brother married former Canadian player Courtney Birchard, which made for a somewhat awkward wedding.

“She had just retired, but she was on the national team for quite a while so a lot of the Canadian girls were at her wedding,” Kessel said. “We were cordial there. Since the season hadn’t started, it was OK. But now, I don’t know if I’d say much more than hi.”

The U.S. and Canada will square off in the gold medal match on Wednesday at 11:10 p.m. EST. 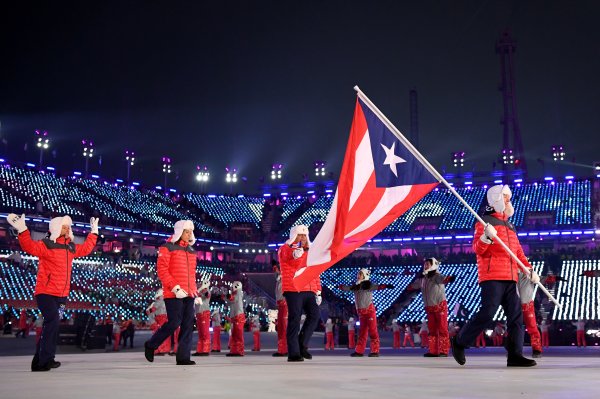 This Skier is the First Athlete to Compete at the Winter Olympics for Puerto Rico in 20 Years. Here's Why
Next Up: Editor's Pick