Hawaii’s emergency authorities lacked reasonable safeguards to prevent the kind of false alert that panicked residents with a warning of an imminent ballistic missile attack, the head of the Federal Communications Commission said.

FCC Chairman Ajit Pai said in a statement on Sunday that an investigation into the incident is well under way with federal and state officials.

“It appears that the government of Hawaii did not have reasonable safeguards or process controls in place to prevent the transmission of a false alert,” Pai said. In determining steps to prevent a rerun “we also must ensure that corrections are issued immediately in the event that a false alert does go out.”

Hawaiian residents, already anxious about months of nuclear saber-rattling between U.S. President Donald Trump and North Korea’s Kim Jong Un, were sent into a panic on Saturday by the false missile alert. The alert was sent when an employee at the Hawaii Emergency Management Agency “pushed the wrong button,” according to Governor David Ige.

Ige apologized for the “pain and confusion” that resulted and said “everything” is being done to prevent a repeat. The FCC has jurisdiction over the emergency alert system. Federal and state lawmakers have also called for an investigation into Hawaii’s incident.

Residents of the island state, as well as thousands of tourists, woke around 8:07 a.m. local time on Saturday to alerts lighting up their mobile phones about — in all capital letters — a “ballistic missile threat inbound to Hawaii” and a warning that “this is not a drill.”

Television programming was interrupted with flashing red text: “A missile may impact on land or sea within minutes. This is not a drill. If you are indoors, stay indoors. If you are outdoors, seek immediate shelter in a building.” Residents were told that if indoors they should stay well away from windows. If driving, they should pull over and “seek shelter in a building or lay on the floor.”

Authorities reversed the warning with a second mobile alert sent 38 minutes later confirming “no missile threat or danger” and “false alarm.” That lengthy delay, and the processes behind it, have been criticized by Pai and others.

How a Real Ballistic Missile Attack in Hawaii Would Play Out

Here's What the Hawaii Missile Alert Looked Like on People's Phones

HEMA Administrator Vern Miyagi said Saturday that a two-person redundancy system is now in place to prevent this type of event — which he said was basically an errant mouse-click — from occurring again.

Hawaii has been on high alert for months given claims by North Korea that its newest intercontinental ballistic missile could fly 13,000 kilometers (8,000 miles). If true, that would put even the mainland U.S. within range, and Honolulu is only about 7,400 kilometers from Pyongyang.

The isolated nation conducted its sixth and most powerful nuclear test on Sept. 3, and launched more than a dozen missiles in the past year. Trump and Kim have traded barbs for months. The president told North Korea’s Kim on Twitter on Jan. 2 that he has a “much bigger & more powerful” nuclear button. Nikki Haley, the U.S. ambassador to the United Nations, has warned that North Korea’s regime “will be utterly destroyed” in a war with the U.S.

“At a time of heightened tensions, we need to make sure all information released to the community is accurate,” Senator Mazie Hirono, a Democrat, said Saturday on Twitter. “We need to get to the bottom of what happened and make sure it never happens again.”

Representative Tulsi Gabbard of Hawaii said Sunday that “you can only imagine the panic, the terror, the chaos and confusion that ensued” across the state.

“Taking this threat seriously, they’ve got minutes to say goodbye to their loved ones, to find their loved ones, to try to find some kind of shelter somewhere, which there are no designated nuclear bomb shelters in Hawaii,” the Democrat and a member of the House Armed Services Committee said on ABC’s “This Week.”

HEMA’s Miyagi said Saturday that if there were a real missile headed to Hawaii from North Korea, “there will be 12 to 13 minutes” of warning.

Given those risks, Gabbard said Trump “absolutely and immediately” should be talking to Kim. “I’ve been calling for President Trump to sit across the table from Kim Jong Un without preconditions, work out the differences, figure out a way to build this pathway towards denuclearization,” she said.

Residents and tourists on Saturday reported pandemonium when the phone alert hit. One widely shared video showed children being lowered into a storm drain for safety; others showed people running toward buildings at the University of Hawaii.

Suzanne Mulder, a Bloomberg employee from Princeton, New Jersey, is vacationing in Honolulu with her family. Her 10-year-old-son noticed the mobile alert.

“We grabbed all the food and water we had, the kids grabbed their stuffed animals and we headed to the lobby,” Mulder said. “Kids crying everywhere, no one knew what was happening. We made our way to an internal bathroom and huddled there with some other people. It was probably 30 minutes between the alert and when we knew it was a false alarm.” 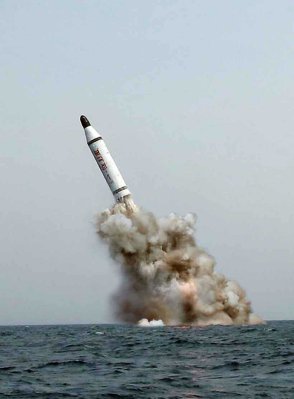