Sharon Stone on the #MeToo Movement: ‘It’s Up to Men to Teach Other Men What to Do'

Sharon Stone is heading to HBO—but she hasn’t left behind what makes her a movie star.

The actress’s role on Steven Soderbergh’s new series Mosaic (airing nightly from Jan. 22 to 26 at 8 p.m. E.T.) capitalizes on Stone’s charisma, her big laugh, her willingness to push further than most of her contemporaries might and her ability to pull it off. (To wit: In the show’s first episode, Stone asks a strapping bartender to “pour me something tall and muscular.”)

Mosaic is a return to Stone’s Casino 1990s shot through with bleeding-edge modernity: The show began its existence as an app that allowed viewers to choose their own experience of the story. And Stone, speaking to TIME Jan. 11, had plenty to say about the times in which we live, including her response to the #MeToo and Time’s Up movements. As Stone puts it, she has spent recent months finally “able to sit with my friends and laugh until we cry and cry until we laugh.”

What made you decide to come onboard this show?

When Steven Soderbergh writes something for you, once you get done screaming and get back up off the floor, I think it’s time to say yes!

Was the shoot—moving quickly to produce content for the Mosaic app—demanding?

Oh, good Lord, yes! When I was first making the deal, they said, you don’t get a trailer and you don’t get a chair. I’m like, the trailer’s one thing, but I need a f-cking chair! I’ve been in the business forty years, people. Let’s get with it!

It was beautiful, and because Steven doesn’t light, I was really grateful for all that white snow, because then you get all that beautiful white bouncy light! And I was also grateful for not having a trailer because that way I got to the set first and got the best light. [laughs]

Do you feel as though people got more of a sense of your character’s point of view because of the show’s style? That people got inside your perspective more?

I think that people said Steven’s not going to talk to you, he never talks. And then I got to the set and he and I just hit it off like a house on fire. And I felt like I had just such a real connection and real understanding. The man is a genius. The specificity is extraordinary and the professional respect is absolutely unbelievable.

Did Soderbergh inspire you to work harder?

I’m really a good soldier. If I have a good general, I’m just great. If I have a really crappy leader, as I think we’ve seen in some of my films, not as great! Because there’s nothing to intuit. When I have a great director and great material, I know what I’m doing.

You were just at the Golden Globes. Do you look at some of these directors and say, I’d like to work with him or her?

I want to work with Guillermo del Toro. I think that his innocent genius works for me. Because, frankly, I think it was my innocence that allowed me to work so well with [Basic Instinct director] Paul Verhoeven. Because, I’m not afraid. I don’t have that kind of fear about doing all kinds of things, because I have an innocence, I don’t have self-doubt. So I like to work with people that have innocence in their craft. People who can go forward and can really tell a story with open fluidity, I just love that.

Your character is a children’s book author, which presents an interesting contrast with her frankness about her desire.

Well, isn’t that how women are? I don’t think that for so long we’ve been able to see women as women are. It’s as though women are supposed to compartmentalize themselves, and we’re not supposed to understand that women are complex people. I think we grasp at this point that’s a bit passé.

Do you feel as though it’s getting easier to get projects with complex women made?

Now that women are making them! And now that people like Steven are making them, men who like women, men who understand and know women. That’s, I think, the nature of what’s happening in our culture, is that we’re starting to tell the truth more. Part of the backlash of so much lying and artifice is this exposure of truth, both in drama and comedically. People are relieved to see the truth of our own reality on film and on television.

It seems like you’re saying it’s a good thing that we, after all the revelations of the past months, can be more open in talking about big systemic problems in Hollywood.

Well, isn’t that the point? We’re in the business of discussing our own humanity and while we are, obviously, trying to kick down some doors, the point is that we’re trying to get to truth but we’re also trying to get to reconciliation. One would hope. And the reconciliation is the ability to be more truthful, to be more compassionate, to be more empathetic. To be more revealing of the tender parts of our day so that we can be more sincere in our human storytelling.

Has recent conversation about sexual abuse and assault made you think differently about your experiences in Hollywood?

More, it’s made me be able to sit with my friends and laugh until we cry and cry until we laugh. It’s taken the secrecy away, it’s taken all the shame and confusion and humiliation away. People can sit down with their loved ones and tell their stories and get love and get it out and get rid of it and see themselves clear and clean. And tell stories that in the end can become freeing and shame-free and sometimes quite hilarious! Because some of the things people do are so stupid. You know, it’s almost unbelievable.

And even—forget the Hollywood aspect of it. Because I would say the majority of my close friends aren’t in the business, so it’s not really about the business. It’s my mom and her mom and all of the women before us, and men, because I’ve had many of my men friends sit here and put their heads in my lap and cry.

Do you feel as though having friends outside the business has been valuable? When did you decide to keep a foot planted in reality?

I have the same friends I’ve had all my life. I just think it’s my personality. I don’t come from here. I come from a small town in Pennsylvania. I’m sort of an outsider. I didn’t have the luxury of going to Yale School of Drama or being in with the “in” people. And then I came from modeling, so people were a little bit more skeptical about me. And even after Basic Instinct, people wanted to say that I was just like that. [laughs]

It’s funny how a role can stick.

Well, Jesus! Especially if you’re good in it!

I wanted to ask if there are any other recent favorite TV shows or movies you wanted to recommend.

And you know from experience how much it takes grit and determination—you really have to have a thick skin.

They’re not going to let her do it that easily because she’s so beautiful, but I think she’s got the grit to climb that hill.

I always feel like it’s unfair to ask women in Hollywood to do all the work of protesting or coming up with more work to do to fix broken systems. What do men need to do in order to make a more fair system?

Thank you for asking me that, because I’m a Buddhist. I really believe in the yin-yang practice. And yin is that breath where you breathe in and you create an opening, an expanse. And I believe that’s what women are doing. Yang is the breath out, and kind of that chop through the space that has been opened. It’s up to men to teach other men what to do. Let me be really clear, a lot of young men have been damaged with this issue, so I want to be absolutely clear that I feel men, particularly young men, have been underrepresented in this movement. But I would like to say that I feel like men are going to have to speak to other men. It’s men that are going to have to set an example.

Because first of all, we want to hear those apologies. I really don’t like the way that these apologies have been shut down. I want to accept Louis C.K.’s apology. I want to say that if you’re courageous enough to say an apology, I want to hear your apology.

Then I’d also like to have men teach other men what is the appropriate way to behave. Because we don’t want to lose the beauty and joy of our sexuality in this new transaction. We don’t want to lose flirtatiousness. We don’t want to lose our human sexuality and the nature and joy of communication. It’s the key! It’s the key! Let me say that I am a heavy flirter with the 80-year-old guy who runs the golf shack at the three-par where I golf, and that makes his day a lot better. I think. And I think it’s really important that we don’t forget how much joy and pleasure that can bring into life. I leaned over the other day on set and put my hand on my boss’s thigh when I was talking to him and then I thought “Oh my god! Am I allowed to do that?” And then I thought, oh, he’s French, it’s fine. [laughs]

I don’t want someone grabbing my boobs but if they want to smack me on the ass once in a while, I don’t want to take that as a big drama. I think we have to be able to still have fun and playfulness. I think we don’t want this to take the playfulness out of our reality. We want to enjoy our playful sexuality in our world. That’s part of the reason we get out of bed every day. 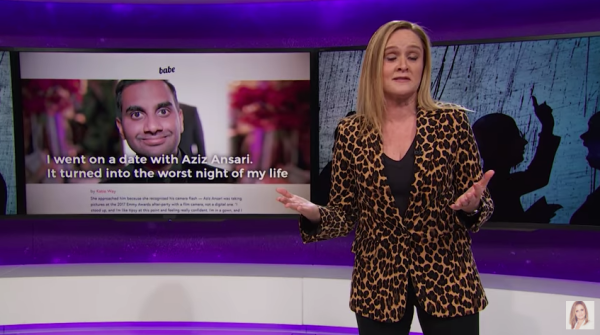 Samantha Bee Has a Message for Aziz Ansari About Feminism
Next Up: Editor's Pick