Veterinarians are warning people about the potential risks of feeding dogs and cats raw meat–based diets—not just for the pets, but for their human owners, as well. In a new analysis of 35 commercial raw dog and cat foods, researchers found that 86% of products contained potentially dangerous bacteria.

The new study, published in the BMJ’s Vet Record, looked at dog and cat food commercially available in the Netherlands. In an email, the study authors said that raw-meat pet foods for sale in the United States are “without a doubt similar” to those tested in the study.

Raw meat–based pet-food diets (sometimes referred to as RMBDs) have become increasingly popular around the world, the study authors wrote in their paper. “Yet claims of health benefits are not backed by evidence,” they wrote, “and several studies have reported possible risks.”

Those risks don’t just apply to the pets themselves, says Paul Overgaauw, a veterinarian and visiting researcher at Utrecht University. Humans can get sick from bacteria and parasites lurking in raw-meat products, too. In fact, humans may face higher risks than their pets, who can be carriers and shedders of these pathogens even when they don’t become sick themselves.

Most reports of infections being transmitted from pets to owners have been anecdotal, says Overgaauw. “But I can imagine that cross-contamination in the kitchen during preparation of the food, and cleaning of the food bowls—as well as direct contact with infected animals—are the highest risks,” he says. Humans may also be exposed to harmful pathogens when cleaning up an infected animal’s waste or when an infected animal licks its owner’s face or hands.

To find out how real these risks are, Overgaauw and his colleagues analyzed samples of 35 frozen pet-food products from eight different brands, all of which are available at pet shops and supermarkets in the Netherlands. The foods contained raw meat, bones, and animal by-products from beef, duck, chicken, lamb, and horse, along with additional ingredients.

E. coli bacteria was found at levels above the threshold for human consumption in 40% of the pet-food products. Even more worrisome, E. coli 0157—a particularly dangerous strain currently responsible for a lettuce-based outbreak in North America—was found in 23% of the samples. The researchers also tested for listeria and salmonella bacteria, and found them in 43% and 20% of the samples, respectively.

Two potentially harmful parasites—Sarcocystis cruzi and Toxoplasma gondii—were also detected in 11% and 6% of the products. The former is known to be dangerous to farm animals, while the latter has been linked to illnesses in cats and humans (including mental illness in cat owners) in the United States.

Despite the relatively low number of products tested in the study, the authors say it’s clear that commercial RMBDs may be contaminated with a variety of zoonotic bacterial and parasitic pathogens, which can pose a risk to pets and to their owners. Earlier analyses on raw pet food in the United States also found similar levels of contamination.

Studies have also shown that cats and dogs who eat raw-meat diets are also more likely to become infected with antibiotic-resistant bacteria than those on conventional diets of dry or canned food, the authors add. That can have further implications for pet owners and for public health in general.

Commercial raw-meat pet foods sold in the United States and Europe contain “all kinds of meat, organs, and bones, sometimes with vegetables or fruits added,” says Overgaauw. “I think that in the U.S. especially, owners are much more liking the convenience, and buy these products instead of preparing raw food on their own.”

“As an evidence-based working veterinarian, I don’t support these products,” he says—not only because of the risk of infection, but because not all of them offer complete and balanced nutrients that dogs and cats need to grow and stay healthy.

“Every owner may decide what to feed his or her pet,” says Overgaauw, but he does believe that warning labels should be added to products containing raw meat. He also believes that pet owners should be educated—by vets, pet stores, and pet-food companies—about the importance of personal hygiene and proper handling of these foods, so they can make the best decision for their pets and for themselves. 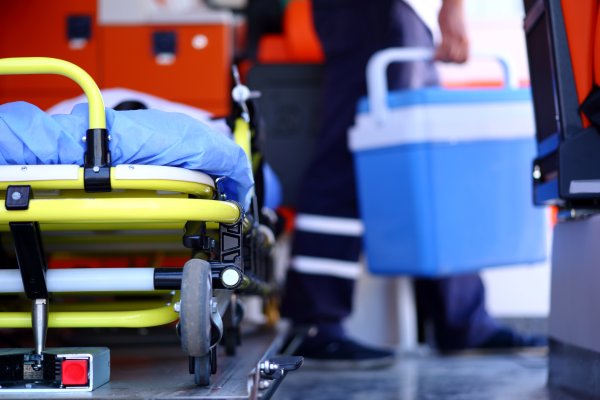 Organ Transplants Hit an All-Time High in 2017. But It’s a Bittersweet Win
Next Up: Editor's Pick