U.S. President Donald Trump’s long-planned state visit to the United Kingdom has been put on hold yet again after the administration feared the President would not receive the warm welcome in London he desired, the Guardian reports.

Trump was scheduled to visit London on an official state trip next month, when he was expected to formally open a new $1 billion U.S. embassy complex in Nine Elms, southwest London. Instead, Secretary of State Rex Tillerson is expected christen the 12-story, 518,000-square foot embassy, described as a “state of the art fortress,” as a date for Trump’s trip remains unresolved.

The state visit has been repeatedly postponed since British Prime Minister Theresa May extended an invitation just days after Trump’s inauguration in Jan. 2017. Since then, British MPs have dropped plans for Trump to address parliament, and political opposition in the U.K. has only grown over the first year of Trump’s administration. Trump tested the strength of the “special relationship” in Nov., retweeting unverified videos from a far-right British nationalist account and prompting London Mayor Sadiq Khan to call for the invitation to be rescinded.

Trump himself offered a different reason for the trip’s suspension, tweeting on Thursday night, refusing to “cut [the] ribbon” at the costly new embassy and blaming President Obama for selling off “perhaps the best located and finest embassy in London for ‘peanuts.'”

In fact, U.S. diplomats had discussed relocating the U.S. embassy from Mayfair, in central London, as far back as 2003 amid concerns that the property was not sufficiently equipped to handle new security threats. The embassy had been housed in Grosvenor Square since 1938, while its last building, designed by modernist Finnish American modernist architect Eero Saarinen and opened in 1960, was granted a historical protection listing in 2009, limiting possible renovations and well as its potential resale value. The building was put up for sale in Oct. 2008, eight days before Obama won his first presidential election, and was sold for an undisclosed sum to Qatari Diar Real Estate in 2009, which won approval to turn the iconic building into a hotel.

The new embassy in Nine Elms was initially projected to be finished under the Obama Administration in late 2016, but security and construction delays set back the opening date. And while Congress did pay for increased security measures at the new location, it did not appropriate funds for the design or relocation as Trump suggested, the Washington Post reported in 2014. Instead, the new complex was funded through the sale of other real estate holdings, including the Mayfair building, which was appraised at $623 million in 2016.

“The new building project is being funded entirely by the proceeds of the sale of other U.S. Government properties in London, not through appropriated funds,” then U.S. Ambassador Matthew Barzun wrote in 2014. “This has always been the plan.” 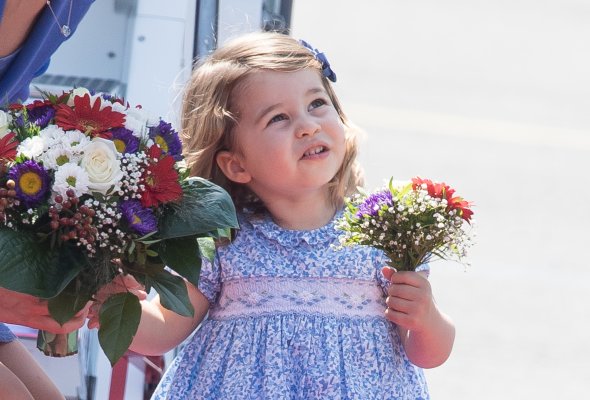 Princess Charlotte Heads Off to Nursery School
Next Up: Editor's Pick